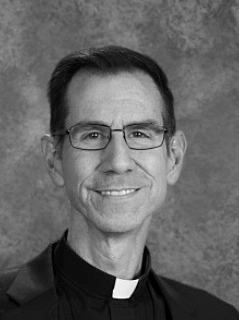 Although he was only at Holy Cross Parish in South Bend for three years, Father Vincent Coppola, CSC, left a strong impression. A deep sadness at the parish followed news of his passing from this life Oct. 2 at age 57 at his New Jersey home.

Born the oldest of four children in Elmhurst, New York, Father Coppola attended Queen’s College in New York before pursuing his vocation to the priesthood at Moreau Seminary at Notre Dame. He was ordained June 9, 2001, into the Congregation of the Holy Cross and served several assignments in Vermont before returning to the Diocese of Fort Wayne-South Bend to serve at Holy Cross Parish. He was appointed parochial vicar at both Holy Cross and St. Stanislaus Bishop and Martyr Parish in South Bend in 2015, administrator of Holy Cross in 2016 and pastor of that parish the following year.

Holy Cross parishioners fondly remember Father Coppola from his interaction with the schoolchildren, who had a great affection for him, and for the encouragement he provided to those in need, according to parish business manager Karen Trzaskowski. He was greatly loved and could relate to people of all ages through his fun, down-to-earth personality. Some of the amusing stories about “Father Vinny,” as he was called, include him riding the mechanical bull at the school Fun Fair and dressing as the Easter Bunny to entertain parish children, she said.

Trzaskowski added that Father Coppola was known as a hard worker, but also a man of compassion who supported the people of the parish and made them feel appreciated. He was very likable and had a big impact on the parish in the short time he was there. He also had a passion for decorating, especially at Christmastime, when he went all-out in his decorations.

His greatest passion was in helping people. He led Bible study, devotions, and “Coffee Hour with a Priest,” in addition to his active involvement in parish and community life, including working fundraisers. He was a man of deep prayer, and deep devotion to the Blessed Virgin Mary, she recalled.

Two years ago, Father Coppola requested a transfer to the Diocese of Trenton to be near his aging mother and assist in her care. He preceded her in passing, as well as his two younger brothers and sister.