CHAMPAIGN, Ill. (CNS) — When Jenna Fesemyer races at the Tokyo Summer Paralympic Games, the students and staff of St. John’s Catholic Newman Center at the University of Illinois will be watching and cheering her on.

And Fesemyer, who was born without a left leg and hip socket because of a rare congenital disease and is now a world-class wheelchair athlete, will be thinking of them with gratitude.

“I owe a lot of my success to the support I’ve received during my time at St. John’s Newman Center,” said Fesemyer, who until this spring was resident director of Newman Hall on the Illinois campus. She stepped down to pursue her goal of making Team USA and competing in Tokyo.

In mid-June, Fesemyer attained that goal at the U.S. Paralympic Team Trials in Minneapolis, qualifying in three events — the 1,500-meter, 5,000-meter and marathon races — for the Aug. 24-Sept. 5 Games.

“It takes a village to become an Olympian,” Fesemyer, 24, told The Catholic Post, newspaper of the Diocese of Peoria, Illinois, after her success in Minneapolis. “And I can confidently say that my faith and the support I’ve received from the staff and students at St. John’s have been instrumental in this journey.” 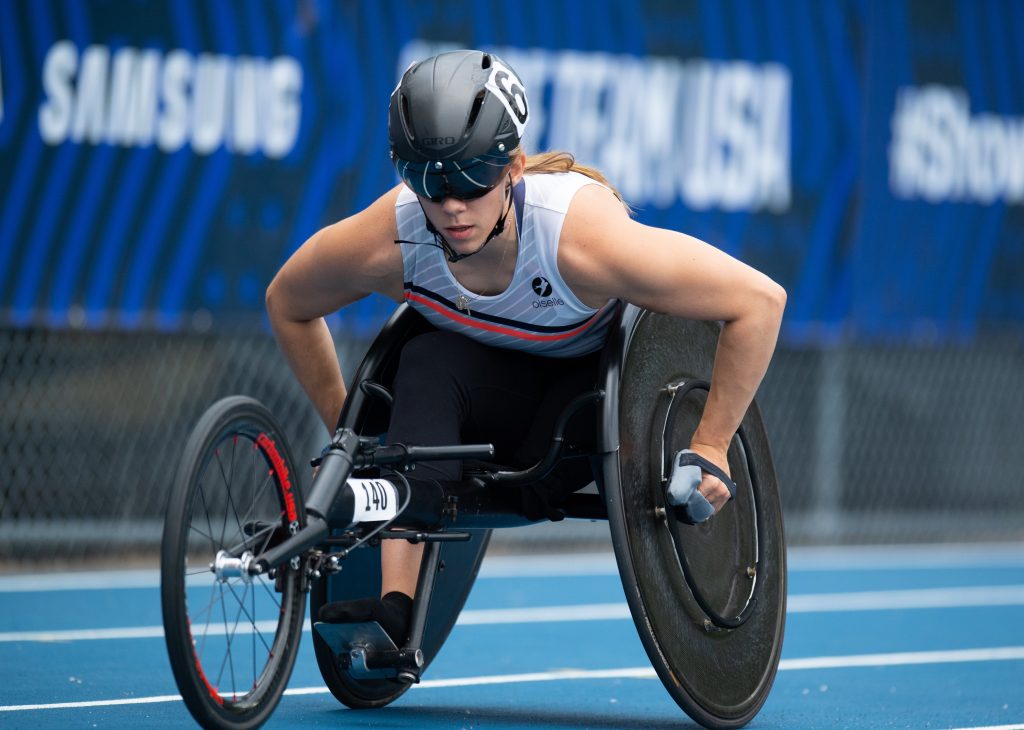 Jenna Fesemyer competes during the 2021 U.S. Paralympic Team Trials for track and field in Minneapolis. A Tokyo-bound member of Team USA, Fesemyer said she owes much of her success to the support she received during her years at St. John’s Catholic Newman Center at the University of Illinois. (CNS photo/Mark Reis, U.S. Paralympics Track & Field, courtesy The Catholic Post)

The Newman Center also has been instrumental in her faith journey.

A native of Ravenna, Ohio, and a trailblazing athlete at Southeast High School there, Fesemyer lived at Newman Hall as a student while working toward her 2019 University of Illinois degree in kinesiology and communication.

Raised in a nondenominational church, she picked the residence hall because it was very accessible and close to the university quad, but did not know until she arrived that it was part of the largest Catholic campus ministry of its kind in the United States.

“It was quite a surprise when we rolled up in the car and we saw priests and religious out moving boxes onto carts,” said Fesemyer. “My family, we all looked at each other and we’re like, ‘What did we do?'”

She now recognizes it was God doing something.

In the second semester of her freshman year, she and her roommate took part in a Newman Center-sponsored retreat. Her first experience with adoration and Mass ignited curiosity about the Catholic faith, a fire that was fueled by the sense of community she was already experiencing at Newman Hall.

Fesemyer completed the Rite of Christian Initiation of Adults at St. John and entered the church on Divine Mercy Sunday of 2017 — a week after others in her RCIA class because she was competing in the Boston Marathon that Easter weekend.

“Divine Mercy Sunday holds a very special place in my heart,” she said.

There are many special places in Jenna Fesemyer’s heart, including for her family. A triplet, she is technically the youngest child of David and Cindy Fesemyer by one minute. Brother Jonathan was born first and sister Jessica second.

“They never let me live it down,” she said of her only siblings taking gold and silver in the birth race. She considers them her “truest and best friends.”

Fesemyer, who wears a prosthetic leg and is also a strong golfer, also has many friends at St. John’s Catholic Newman Center.

“I couldn’t be happier for Jenna as she’s attained a goal she’s been aiming for a long time,” said Father Robert Lampitt, head chaplain. “And yet, the way she bears a faithful witness to our residents and other students is what really impresses me.”

“She shows us all what true perseverance and faith in Christ can achieve, whether that be competing in events or growing in holiness,” he told The Catholic Post. “And she does it all with such grace and humility.”

Fesemyer has trained countless hours to do well in Tokyo, and is honored to represent the United States there. But medals are not her highest goal, even though she has earned many — including gold medals in the 800, 1500 and 5000 meter races at the 2019 Parapan American Games in Lima, Peru.

“Glorifying Christ comes first, always,” she said. “I wouldn’t be where I am today if I didn’t look to Christ in my time of need or doubt. When we turn to Christ, our joys are multiplied.”

Dermody is editor of The Catholic Post, newspaper of the Diocese of Peoria.