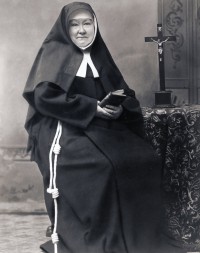 MISHAWAKA — Pope Francis approved his first decrees from the Congregation for the Causes of Saints on March 27, and among them was a “Decree of Miracle” acknowledging a miracle attributed to the intercession of the Venerable Servant of God, Mother Maria Theresia Bonzel, foundress of the Sisters of St. Francis of Perpetual Adoration.

This miraculous cure of a young boy from Colorado Springs, Colo. — who is now a young adult — paves the way towards her beatification, which is scheduled to take place on Nov. 10 in Paderborn, Germany.

Mother Theresia was born Regina Christine Wilhelmine Bonzel on Sept. 17, 1830, in Olpe, Germany. The girl born into a wealthy family had an early desire to follow Christ, according to records provided by the Sisters of St. Francis of Perpetual Adoration. It’s believed she was formed by an intensive prayer life, a great devotion to the Holy Eucharist and a love of St. Francis of Assisi. She entered the Third Order Secular Franciscans in 1850, and became a consecrated religious in 1859. Her service to the poor did not go unnoticed, and Bishop Konrad Martin asked her to form a congregation devoted to that cause. The Sisters of St. Francis of Perpetual Adoration in Olpe was approved by the Church on July 20, 1863.

Sister Rose Agnes, former superior and longtime archivist at the Mishawaka provincial house, believes Mother Theresia’s devotion to the Eucharist is one of her most heroic virtues, giving her the grace to minister in other areas like education and healthcare.

A widespread anticlerical reaction in Germany, known as the Kulturkampf, restricted Mother Theresia’s work and the reception of new candidates. As one door closed, another one opened when an American bishop paid her a visit. Mother Theresia quickly accepted Bishop Joseph Dwenger’s invitation to establish a convent within his Diocese of Fort Wayne. Mother Maria Theresia died on Feb. 6, 1905.

“That was when the whole northern part of the state was one diocese,” explains Sister Angela Mellady, provincial, “We came to Lafayette in 1875.”

The sisters were given a small house and a benefactor donated two lots. There, the first building of the present St. Elizabeth Hospital was built. With the rapid expansion of the community, a wing for the convent was added to the hospital in 1905. By 1940, the provincial house in Lafayette extended over a two-block area. The site also included a novitiate, a postulancy, a 350-bed hospital, a training school for nurses, a high school and a college.

“The community kept growing … we eventually ran out of space!” says Sister Rose Agnes, reflecting on how it once seemed like the order might die out in Germany. “Then they came here. … Between 1885 and 1896 there were 600 novices. That’s 60 a year!”

In 1943, Bishop John F. Noll dedicated the new provincial house at its current location in Mishawaka. The former Carlisle estate became known as “Mount Alverno” and is currently home to about 80 sisters.

The sisters serve primarily in education in this diocese … the University of Saint Francis, Marian High School, St. Matthew School and St. Anthony School in South Bend.” They also have sisters who assist with the diocesan Mass for shut-ins and provide day retreats.

The congregation remains true to her original mission 156 years after Mother Theresia founded the Sisters of St. Francis of Perpetual Adoration.

“The sisters strive to combine the contemplative life with the active and the perpetual adoration and works of mercy,” says Sister Rose Agnes.” That was her purpose for founding the congregation.”

The Sisters of St. Francis of Perpetual Adoration continue to serve in education, health care and other ecclesial ministries in Germany, the United States, the Philippines and Brazil. In doing so, they follow in the footsteps of Jesus who spent His public life praying, teaching, healing and ministering to others.

The Provincial House of the Immaculate Heart of Mary Province is located in Mishawaka. These sisters serve in the Archdioceses of Chicago and Indianapolis, and the Dioceses of Fort Wayne-South Bend, Lafayette-in-Indiana and Gary.

In Fort Wayne, the Sisters of Saint Francis rejoice that this gift comes during their celebration of the 150th jubilee of the congregation and the Year of Faith. To learn more, go to www.ssfpa.org.

Foundress visits the US three times

MISHAWAKA — Mother Maria Theresia visited the USA three times. Her first visit was from May 1878 to June 1879.

Mother Maria Theresia’s community and work was restricted in Germany, but in America, there was a most unexpected development. Tasks and responsibilities multiplied so rapidly that the number of sisters was not sufficient for the work. Since candidates could not be accepted in Germany, Mother Theresia sent them to America where new American candidates were also accepted.

She fostered the exchange of correspondence between the two countries. However, even the best exchange of correspondence could not take the place of a visit in person. As the possibility of further foundations existed, the visit seemed advisable. Many arrangements had to be made to insure the unity of the congregation in spite of the great distances involved and, to give the American group the necessary freedom to carry on normal business negotiations and still remain united.

The first superior in Lafayette, Sister Clara Thomas, was ill, so another task she faced was to appoint a new superior.

Thus Mother Maria Theresia accompanied by Sister Deogratias, as the new designated superior for Lafayette, embarked by boat for her first trip to America. She remained with the sisters for an entire year and thus learned day by day the life of the sisters through personal experience. While in America, she also traveled to Columbus, Neb., to establish a new foundation.

In 1885, the congregation in the U.S., in addition to a motherhouse and novitiate in Lafayette, operated six hospitals and seven schools while combining these works of mercy with their life of prayer and Adoration.  Since Mother Maria Theresia’s return from America in 1879, during which time she learned of the conditions there, she was keenly devoted to and interested in developments across the sea.

She showered all the love of her maternal heart upon her sisters, and played an intimate role in all their endeavors. Repeatedly, her circular letters crossed the ocean to all the sisters. The sisters in America sensed and realized deeply what they had in their mother from Olpe. A large number of her letters were carefully preserved and today disclose the deep concern she had for them.

Due to the growth and development of the congregation in America, Mother Maria Theresia decided to make a second trip to America. She proceeded to Lafayette, which she used as the center for visitation to the various convents of that region. For many sisters the visitation was another visit with the mother, but for others it was their first personal contact with her. The laity who met her held her in great esteem.

Due to the expansion in Amercia, the General Council determined that the congregation be divided into two provinces — a German Province and an American Province. Realizing how much depended on the person of the superior, Sister Alphonsa Neuhoff, one of the first sisters who had come to America, was appointed provincial superior.

Since Mother Maria Theresia’s second trip to the U.S., the number of sisters and new foundations had increased substantially. The sisters received with great joy the visit of their mother.