Women from around the diocese gathered on the 100th anniversary of the Fatima apparitions for a ‘Be it Done’ retreat day at St. Vincent de Paul, Elkhart. The speaker for the retreat was Rose Averill, who began the day by calling on the intercession of the Blessed Mother and St. Rita, St. Monica, St. Gianna Molla and Servant of God Elisabeth Leseur, whose atheist husband converted after her death and became a priest ministering to priests, including Archbishop Fulton Sheen.

Averill shared that because of a difficult childhood and family life she didn’t speak for years, even though she was able to do so. After a couple of what she called “mystical experiences.” she believes she was shown how God wanted her to use her voice. She shared her faith journey, which began at 12 years of age when she took it upon herself to be confirmed after her parents were uncooperative in assisting. At age 15, while on an Antioch retreat, she was introduced to eucharistic adoration, where God revealed to her that she truly was in His real presence. 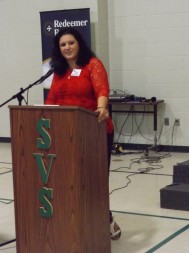 She told retreatants, “I am here because God called you to be here. There are no coincidences, just God incidences.”

Averill’s husband, Frank, is an physician; she is currently CEO of St. Francis Medical Institute in Clearwater, Fla., which has a chapel and where every workday begins with prayers and daily Mass readings.

She shared some personal miracles, including walking away from an accident that totaled her vehicle; and how witnessing the aftermath and her physical healing affected her husband, friends, an emergency room doctor who said he “missed God,” and a personal injury attorney —  “all ordinary people doing everyday things, witnessing something extraordinary,” she said.

Averill shared with the women how living out her faith and praying courageously has brought several people to come to know God who didn’t before. She challenged those present to bring people to Jesus in adoration — Catholics and non-Catholics.

“Are you inviting everyone to meet Jesus, like Levi the tax collector? Are you telling everyone your testimony, like the woman at the well?”

She admitted she didn’t initially like the rosary, until a priest friend explained that the beauty of the rosary is the melody and the meditation.

“The rosary is a beautiful melody of the heart and has such incredible power,” she said.

Averill said that although her husband was raised Catholic and went to Sunday Mass, he thought her attending daily Mass and adoration was a waste of time. She prayed for 30 years for him to fall passionately in love with Christ, and on a pilgrimage to Lourdes that conversion happened. He has been attending daily Mass and is in discernment for the diaconate.

She said although her prayers weren’t answered as quickly as she liked, she encouraged the attendees who are praying for children or other family members who’ve left the church to keep praying.

“When the prayer of our heart is to follow him and do his will, He will always, always answer faithfully.”