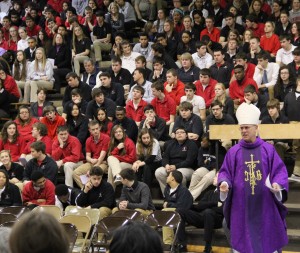 Bishop Kevin C. Rhoades spoke of the seven capital sins, including anger, during his homily at the Mass celebrated March 5 during his pastoral visit to Bishop Luers High School.

On Ash Wednesday, the Collect (Opening Prayer) of Mass referred to our “taking up battle against spiritual evils” during Lent. We prayed that “we may be armed with weapons of self-restraint.” One of the evils that is ever too common today is the sin of anger.

Anger is one of the seven “capital sins,” the sins which engender other sins. Anger certainly can lead to many other sins: like cursing, violence, hatred, etc.

It is important to point out that anger is not always sinful. As a feeling or a passion, it is not necessarily sinful. To become angry at an injustice is not sinful. For example, who would not feel anger if he sees a child being harmed? In the Bible, we read about the righteous anger of God (God’s wrath) in the face of evil. Such anger is virtuous, not evil. We read about the anger of the Old Testament prophets because of the people’s idolatry, oppression of the poor, etc. And in the New Testament, we read of Jesus’ anger when He drove the money changers out of the temple.

The sin of anger is different from righteous anger toward evil. When feelings of anger are not moderated by the control of reason, the anger becomes sinful. It is an emotion that hardens into resentment and hate. The capital sin can be called unrighteous anger. Anger is an unruly passion that can easily become sinful. Sinful anger is opposed to both justice and charity. It is something seriously counter to the love of God and neighbor. It is often rooted in self-absorption and pride.

I write about this sin because of the great harm it does to others and to ourselves. It is a big impediment to growth in holiness. It can have devastating effects on human relationships, including within families and between spouses. It can have harmful effects in the Church. Angry priests easily hurt parishioners and angry parishioners can easily hurt their priests.

Sadly, I see or hear about such anger regularly, most often in letters and e-mail communications. People can get angry over something, and without reasonable deliberation, quickly shoot off an angry text or e-mail. The easy and rapid means of communication today have a downside — in the anger of a moment, we can send out an angry and hurtful comment. I don’t like to read blogs since so often anger is spewed out in a manner that displays a real lack of charity towards others. We should not underestimate the harm done by angry words.

I sometimes will ask: how can a follower of Christ be so angry and communicate in such an uncharitable way? It is obviously a spiritual problem. As we prayed on Ash Wednesday, we must take up battle against spiritual evils, including battle against the capital sin of anger.

We read in the book of Sirach: Wrath and anger are hateful things, yet the sinner hugs them tight (27:30). Lent is a good time to let it go. Letting go of anger can require much spiritual effort. People do trespass against us at times. We need God’s grace to forgive and be merciful. Regular confession can help us and open our hardened hearts to His grace.

Saint Paul wrote to the Ephesians: If you are angry, let it be without sin. The sun must not go down on your wrath; do not give the devil a change to work on you (4:26). This is good advice for all of us.

Every capital sin or vice has a corresponding, contrary virtue. In the case of anger, the contrary virtue is meekness. Jesus taught the Beatitude: Blessed are the meek, for they shall inherit the earth. Jesus also described Himself as meek and humble of heart. He calls us to imitate His meekness.

Meekness helps us to control anger. Meekness is closely connected to love. It can be described also as gentleness, kindness, and mildness. It moderates, controls, and calms angry feelings. It is related also to clemency. Meekness is not weakness. On the contrary, it is a strong and vigorous virtue whereby one gains authority over one’s anger.

If we wish to grow in holiness, we cannot be angry persons. We may experience angry feelings. That is part of being human. But to persist in anger and become angry persons is a tragic and dangerous thing. It is like a cancer in a person’s soul.

We live in a culture where there is a lot of anger on display. I could give plenty of examples, from things like road rage to uncivil political debates. It seems like it is all around us sometimes. But it can also be in our homes and in our hearts and yes, even in our church communities. Let’s fight this spiritual evil that is so poisonous, this sin against charity.

Let us remember the words of Jesus in the Sermon on the Mount: You have heard the commandment imposed on your forefathers, ‘You shall not commit murder; every murderer shall be liable to judgment.’ What I say to you is: everyone who grows angry with his brother shall be liable to judgment; any man who uses abusive language toward his brother shall be answerable to the Sanhedrin, and if he holds him in contempt he risks the fires of Gehenna (Mt 5: 21-22).