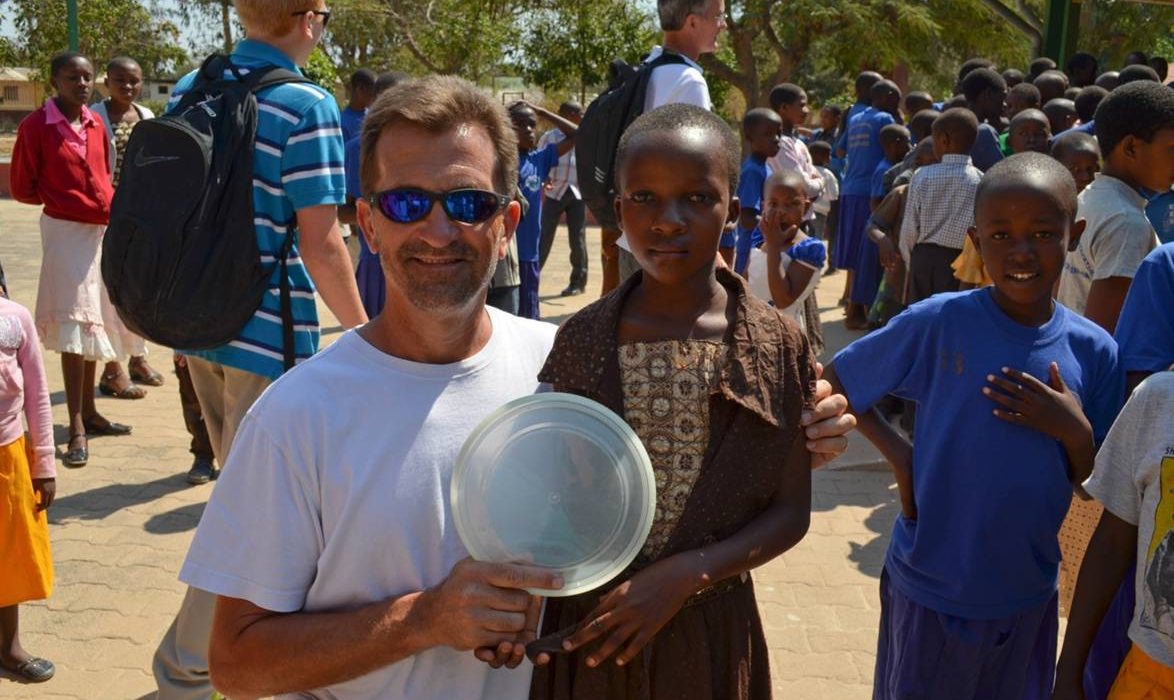 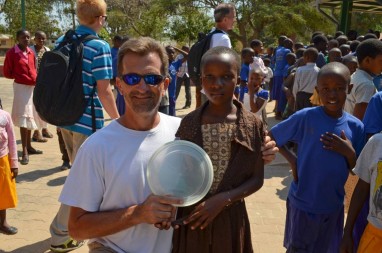 Michael Doseck and the mission team took more than 300 Frisbees to Tanzania for clinics to teach the children how to throw, catch and play games.

Lutherans, Catholics join together on mission trip to Tanzania

ARCOLA — St. John’s Lutheran Church in Lake Township Indiana helped raise $150,000 to fund a team of 33 people on a mission trip to Mwanza, a city in the nation of Tanzania on the eastern coast of Africa, in 2007. Working with some interdenominational missionaries there, the team erected a hospital wing in just three weeks for the East of Lake Victoria Lutheran Diocese.

The Michael Doseck family, parishioners of St. John’s, contributed to the fundraiser but did not travel with the mission team. However, a couple of years later, Doseck’s teenage daughter, Hayley, asked her dad if they could do more. That’s when planning began for a return mission trip in 2012 titled, Back2Africa.

“We were going to help the same missionaries in Mwanza,” said Michael Doseck. For the next three years he and several others began the necessary fund- raising, again asking the 600 members of the church to help sponsor a team.

“We had many chicken-and-noodle dinners, fish fries and garage sales,” said Doseck. The Lutheran Foundation agreed to underwrite through a grant for half the travel expense, and Lutheran Hospital, Fort Wayne, donated a CAT generator and X-ray equipment.

“It was hard work but really, really worth it!” he added, indicating the church congregation contributed $50,000 from individual donations of $5 to $2,000. The final total was $125,000 when all other sources were included.

Doseck, his wife, Kathy, and daughter, Hayley, planned to join the team. Their son, Logan, a junior at Indiana University, could not accompany the family since he has cystic fibrosis and tuberculosis is rampant there, Doseck explained.

About a month before the 21-member team of professionals was about to leave they received a call from the missionaries in Mwanza saying they had separated their relationship with the Lutheran diocese. This after the team had purchased a shipping container for $4,000, sent it to Tanzania for an additional $14,000 and wired $10,000 to build a foundation for the generator.

Doseck, vice president of the commercial vehicle division of Belcan Corp., Cincinnati, remembered working with Midmark Corp. in Versailles, Ohio, a medical equipment supplier, who funded a similar mission to Tanzania supplying dental and birthing equipment through a Catholic organization there called The Mission of the Body and Blood.

He called one of Midmark’s executives, Mitch Eiting, and said, “I have a real problem!” Doseck explained what had happened, how visas had been issued, inoculations and vaccinations given, and a team of experts was ready to go.

Eiting put Doseck in touch with the Society of the Precious Blood Catholic missionaries in Tanzania. And instead of flying into Kilimanjaro International Airport and taking a “puddle jumper” — as Doseck called the small airplane — to Mwanza, the trip was swung south from Kilimanjaro to Itigi, a town of 4,000 inhabitants in central Tanzania. It took 15 hours by bus to get there.

And, instead of installing what would have been a backup generator in Mwanza, an eight-member team put the CAT generator in a small town of 800 people called Malongwe, which never had electricity before. Since the roads are dirt and in poor condition, it took three hours to get to Malongwe from Itigi via another “bone jarring” ride in an SUV, Doseck said. Again, instead of equipping Mwanza with additional X-ray equipment, digital X-ray equipment was installed in a small dispensary in Itigi, saving them thousands of dollars over their old method using film processing. Finally, instead of conducting a Vacation Bible School (VBS) for the ill-fated albino children of Mwanza, who often are killed because of superstition, the team held VBS’s in Itigi’s Catholic church, and in the nearby capital city of Dodoma for 250 HIV children, the majority who lost both parents to AIDS.

Pastor Ralph Easterhaus of St. John’s, Lake Township, and Precious Blood Priest Father Israel Fidelis of Tanzania, used the occasion as a “teachable moment,” talking about Jesus’ birth, death, resurrection and ascension. The Village of Hope and the St. Gaspar Referral and Teaching Hospital for HIV/AIDS orphans is located in Dodoma, run by the Society of the Precious Blood Catholic missionaries and sisters.

With a grant of $2,500 the mission team brought musical instruments, more than 300 frisbees, nearly 400 cross necklaces, and arts-and-crafts projects for the children.

“Even though we are not Catholic, we walked a mile with Father Israel to attend Mass at 7 a.m. in Precious Blood Catholic Church the six days we were in Itigi,” said Doseck. “There was no Catholic-Protestant distinction — it was just us. The relationships were the best thing!” he said.

After installing the generator in Malongwe and the X-ray equipment in Itigi the teams did a “walk about” through each town with the children following them, Doseck said. When they returned from their walks the people had assembled a celebration attended by the elders, and both the Christian and Muslim children danced and sang for them. In Malongwe, the team was presented a gift of 10 gallons of black African bee honey.

At one point during the 16-day mission the team ran out of money to house the team. Again, Eiting answered the call, sending the money through the Mission of the Body and Blood. “We had $2,500 left over so we turned it over to the priests,” Doseck said. “It’s God work! It really is,” he exclaimed.

During a “thank you” dinner in the rectory, there was talk from the priests about starting a nursing program in Itigi. And since Hayley, a freshman at IPFW in Fort Wayne, is studying nursing, they discussed beginning an exchange program. A member of the 2007 team now is a certified EMS technician and Lutheran Hospital again is showing an interest in contributing to another mission project.

“I think we can put it together,” Hayley’s proud father said. “It starts with a spark and, of course, money!” In fact, Father Israel is planning to travel to Fort Wayne in 2014 to help begin another fundraising effort for 2015 to furnish Malongwe with a much-needed ambulance. Doseck said he is hopeful other churches in the Diocese of Fort Wayne-South Bend will be able to join with the next mission and associated fundraising project.