This post has been edited to reflect correct last name of Patti Benedict.

Sister Theresa Renninger has a response to the myriad and often dramatic complaints of childhood. Three generations of St. Mary of the Assumption School students can recite her advice by heart: “Offer it up.”

It’s not that she’s indifferent to their situations. In fact, she’s known for her mercy and forgiveness; but the 88-year-old nun also has extensive experience navigating the vagrancies of childhood. Blessedly, families of the Avilla school say, she also has an abundance of grace when it comes to growing young hearts, minds and bodies.

It now seems like a different age when young Theresa played with her siblings on the family farm in Hoagland. They had plenty of fun, but they also learned to work hard.

Prayer was part of their routine, including a rosary every night and prayers before and after meals.

The Catholic family sent their children to St. Joseph – Hessen Cassel School. Fellow students on the school bus called attention to the family, she recalled.

“I remember, on the first day as the bus pulled up, they counted us out loud, out the window: One, two, three, four, five, six, seven.” Even with the two youngest children at home at the time, the size of the Renninger family was notable to some. Sister Theresa had 12 brothers and sisters in all. Most families, even Catholic ones, are smaller now, she acknowledged. 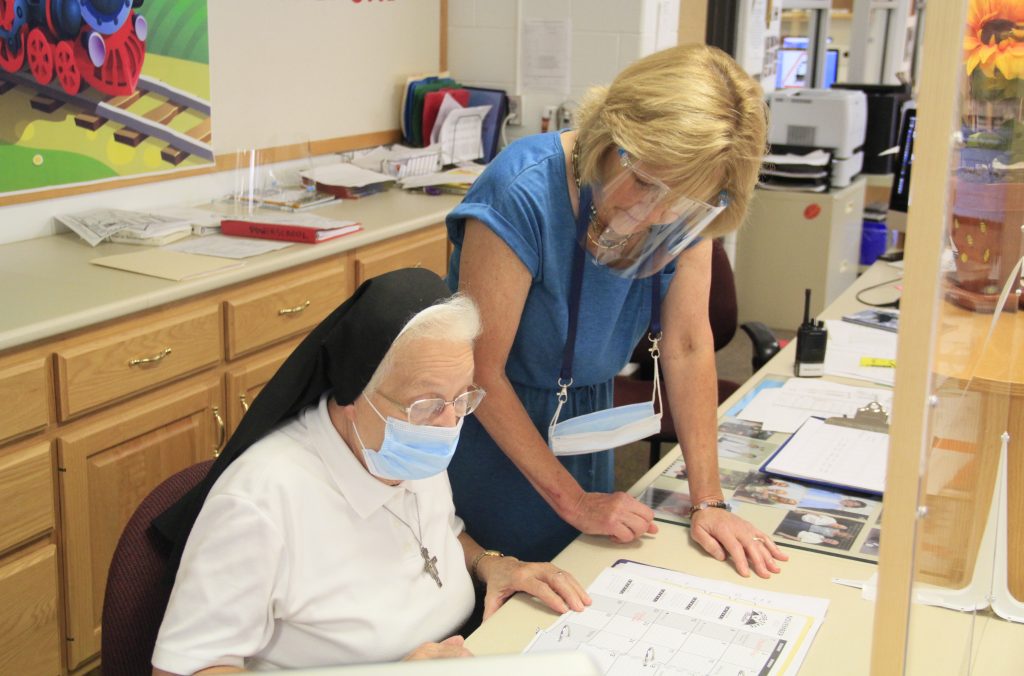 Jodi Marlin
Sister Theresa Renninger goes over plans with librarian Patti Benedict at St. Mary of the Assumption School in Avilla Aug. 26. The former principal is celebrating her 70th jubilee this year. Even though she has been retired for 12 years, Sister Theresa’s presence at the school remains a daily one: She volunteers in the library, as a kindergarten aide and as a tutor.

From her earliest recollection she was drawn to the religious life, and at 18 years of age entered the Franciscan Sisters of the Sacred Heart order. The motherhouse was originally located in Avilla, and the sisters founded St. Mary of the Assumption School.

At the time, the charisms of the order were nursing and teaching. Sister Theresa’s love of children drew her to the latter. For 10 years she and several of her religious sisters taught at St. Mary school and assisted with religious education at the parish. Sister Theresa’s ministry then took her to Illinois, Schererville and to St. Charles Borromeo School in Fort Wayne, where she served first as a teacher and then for 13 years as principal.

In 1985 — “forever ago,” she said — she returned to St. Mary as its principal. By that time, the old school building was gone. A new one stood nearby. But most of the same Catholic families were still around and seeing them and their children made it feel like home, she said.

During her tenure, St. Mary of the Assumption expanded its footprint and added a sixth, seventh and eighth grade. In addition to administrative duties Sister Theresa taught a math and religion class as well and mentored other new principals. 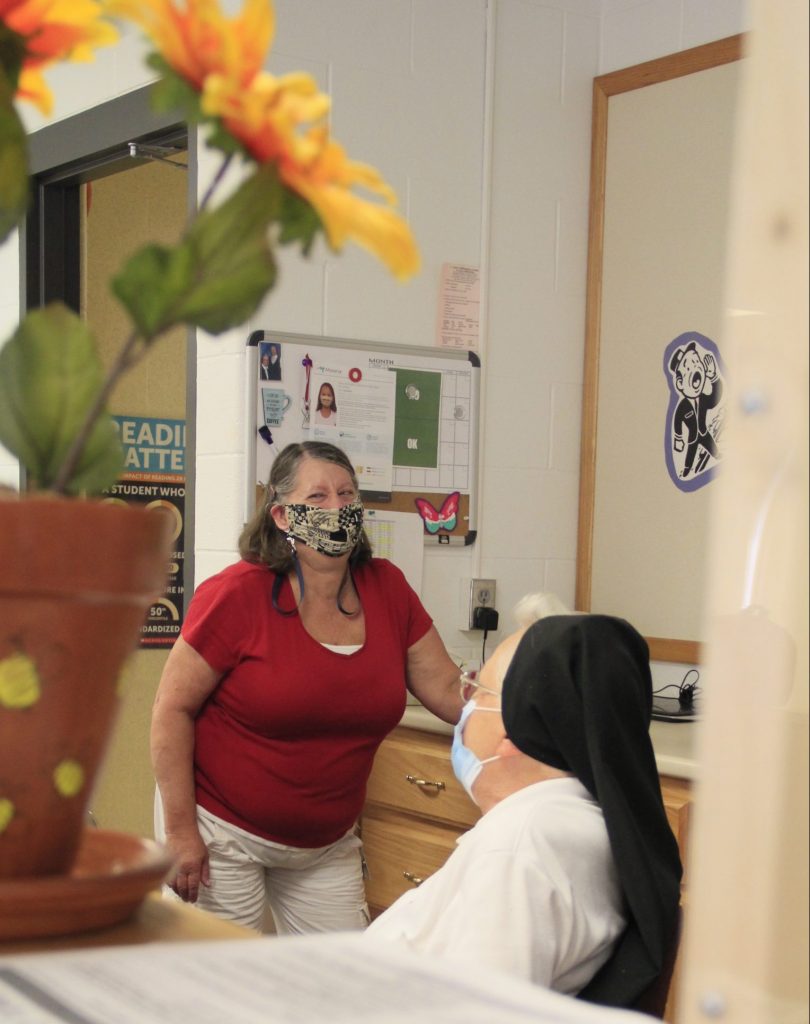 Part of Sister Theresa’s ongoing mission at the school lies in her calling to maintain its Catholic identity. Several of her efforts are particularly visible and enduring, including students’ annual recitation of the Christmas story from the Gospel of St. Luke; and the burying of an Alleluia banner as Lent begins, as well as its resurrection afterward. Friday silent lunches during the same liturgical season were another inspiration.

Her dedication to service has long been inspiring to those who know Sister Theresa. Although she’ll not say so, it has also earned her broad recognition. Several teacher of the year and administrator of the year awards have her name on them, and in 2014 she was honored with Greater Fort Wayne Business Weekly’s Lifetime Achievement award.

Among the hires she made before retiring from administration at St. Mary of the Assumption School in 1999 was Patti Benedict, previously a school volunteer. Now library director, Benedict is pleased to have Sister Theresa available to help her check out students’ books, restock shelves and, during the summer, wash the covers of every single book in the library — a gesture Sister Theresa initiated.

“I would rather them get dirty because kids use them then have them get dusty because they’re not used,” she explained.

Before the COVID-19 pandemic struck, Sister Theresa was also a kindergarten assistant and tutored any St. Mary student who might be in need of a little extra help. “She has a knack for spotting the struggling student,” Benedict noted.

“St. Mary’s is my home, it’s like my family, it’s a place I enjoy coming to work,” Sister Theresa admitted. “I could stay home and do nothing, but I’m not really the type. That’s not me. And I love what I’m doing. I love the children. ” 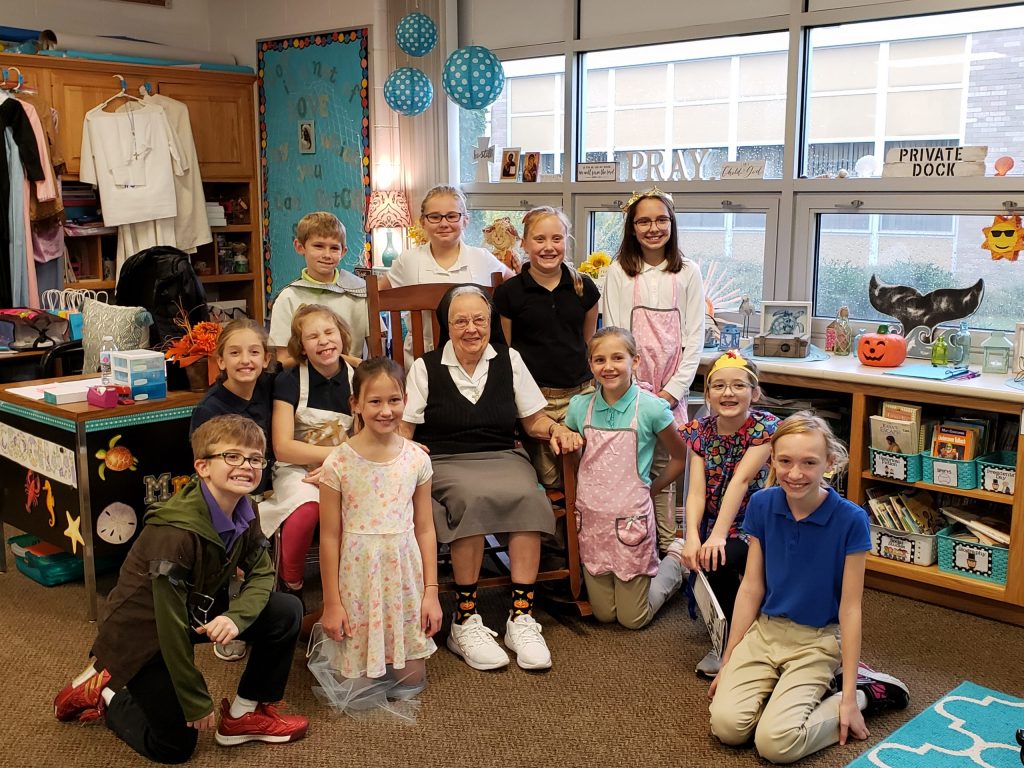 Back surgery in 2018 slowed the nun’s gait just a little. But her walker fits in the trunk of her car, where she puts it every morning for a short drive from the convent at Presence Sacred Heart Home — also a place at which she ministers — to the school, where she takes it out and gets to work. The process reverses itself at lunch and is repeated every afternoon during the school week.

“She’s just an inspiration. She has such perseverance,” said Benedict. “It’s not really what she says. It’s her presence.”

Sister Theresa was the sixth grade teacher of Joni Lazoff, St. Mary school secretary. “She also was my father’s teacher, and now she has volunteered in the classrooms of both of my daughters.”

Lazoff herself remembers, as a young student, Sister Theresa’s work ethic — as well as hearing the familiar phrase, “Offer it up,” when students lacked the motivation or desire to get the necessary work finished.

“She has been a pillar at St. Mary for generations and a true representation of what St. Mary of the Assumption School stands for: a call to service. In my mind, when I think of St. Mary school, Sister Theresa automatically enters my thoughts.”