Holy Cross Father Anthony Szakaly, chair of the Ave Maria Press board of directors, reads the Gospel at the Ave Maria Press 150th anniversary Mass at Moreau Seminary at the University of Notre Dame on May 1. Bishop Kevin C. Rhoades was the celebrant.

NOTRE DAME — Since its founding in 1865, Ave Maria Press has provided spiritual nourishment and education for the Catholic faithful through its publication of countless books, magazines and other resources to help readers on their journey to better know, love and serve God. 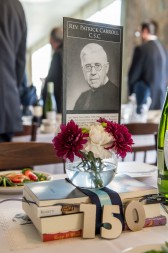 On May 1, exactly 150 years after the first issue of its weekly magazine The Ave Maria was published, leaders and contributors within the organization joined to commemorate all that has been accomplished in the name of Our Lady.

The tribute began by highlighting Holy Cross Father Edward Sorin’s efforts to create The Ave Maria, which served as one of the first American Catholic publications for a predominately immigrant Church. Despite obstacles, it became the country’s most popular Catholic magazine during its 105-year run. Sorin implored at its foundation that “The Ave Maria is a family newspaper, and it wishes to speak to hearts that love the Blessed Virgin.” During this time, The Ave Maria covered many significant moments of American and Church history, before the company shifted its primary focus in 1970 to the publications of books and pamphlets. Since then, Ave Maria Press has continued to highlight the writings of many prominent Catholic authors covering a diverse array of spiritual issues, while also adapting to changes within the culture.

Even in uncertain times, Ave Maria Press has continued to remain focused on preserving devotion to Our Lady and leading Catholics to grow in faith. One day earlier, at an open house at the main facility, board member and Holy Cross Father David Guffey touched upon the company’s success in transition.

“It has been great to see Ave grow and thrive. Publishing and printing has changed so dramatically in recent years, with the next frontier being advancements in digital media,” Father Guffey said. “While Catholic publishing companies are shrinking, Ave is looking far enough ahead and adapting, looking for how to reach audiences; they are well poised to continue for 150 years. The biggest challenge is how to encourage Catholics to read, watch and absorb spiritually enriching material. It isn’t just about producing solid products, but also about marketing it in such a way that it becomes appealing to consumers who might be harder to reach.” 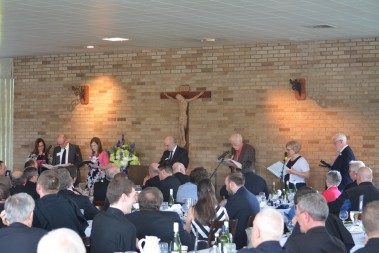 Karey Circosta, vice president and director of sales and marketing, further emphasized this point. As a Catholic raised in South Bend and educated by men and women from the Congregation of Holy Cross, Circosta shared, “It has been exciting to be part of a non-profit organization, which promotes the mission of Holy Cross that is also celebrating 150 years. A large part of our success has been through our commitment to diversity. Our challenge now is to withstand like we have throughout our history, to continue enhancing and diversifying what we do. We cannot take success for granted, but must keep working to ensure continued growth for the future.”

In gratitude, Grady expressed his appreciation to the entire staff, members of the Congregation of Holy Cross, members of the board of directors, former and retired employees, authors who have come from near and far, and all those who have worked tirelessly behind the scenes to help shape the successes of Ave Maria Press. He also shared three new features of the company, which highlight its historical vision and upcoming hopes.

“In January,” he said, “we unveiled a new logo, which simultaneously looks to both the past and the future. It recalls and celebrates the ongoing importance of our Marian heritage, while looking ahead with a sheaf of unbound pages, a nod to our digital present and future.”

Secondly, he praised the idea of Karey Circosta and Kristen Hornyak Bonelli to display quotations throughout the building. “These quotes will serve to remind us of our mission — that we are “educators in the faith” and that we should continue to pray that Ave remains, in Father Sorin’s words, a “source of most abundant blessings” for the Church and for the congregation.”

Thirdly, he directed attention to the visual timeline, which runs along the wall of the main hallway, citing the efforts of many people to research Ave’s extensive history and display it in elaborate fashion. This timeline can also be viewed in full detail at www.avemariapress.com/anniversary.

Grady further emphasized, “What I’m most proud of is that through the years Ave has tried to serve the needs of the whole Church, not just one segment of it. While staying true to our mission we strive to be flexible and adaptable. Our attention to the diverse needs of Catholic schools, Catholic parishes and individual believers and seekers has been the foundation of a publishing program that — we pray — continues to give glory to God, serve God’s people and honor Holy Cross.”

“I may be deceived, disappointed, laughed to scorn, but with all that I will still retain my conviction that The Ave Maria will be the source of most abundant blessings, one of the best things ever done in the congregation, and ultimately a glorious work for our Blessed Mother.”  — Holy Cross Father Edward Sorin 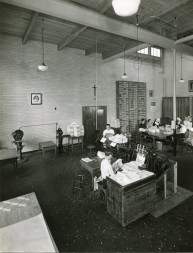 Holy Cross sisters and brothers working on the magazine.

NOTRE DAME — Even after 150 years, Ave Maria Press remains committed to the core mission set by Holy Cross Father Edward Sorin in 1865 as he established the Congregation of Holy Cross in the United States.

Ave was the third apostolate of Holy Cross founded in the United States by the missionary priest, following the University of Notre Dame and St. Joseph Parish in South Bend. Father Sorin started The Ave Maria magazine to honor Mary, focus on Catholic families and showcase the best American Catholic writing. Many had doubts about whether the publication would survive because of the fate of other Catholic periodicals, as well as the mainly poor, immigrant makeup of the American Church. But The Ave Maria did thrive for more than 100 years and at one time was the most popular Catholic magazine in the country.

Father Sorin would be proud of his legacy. “Planning for our anniversary has given all of us at Ave Maria Press a welcome opportunity to step back from our day-to-day work and reflect on the history and legacy of the wonderful publishing ministry that Father Sorin founded 150 years ago during a very different era,” said Thomas Grady, Ave’s publisher. “Father Sorin might be mystified by the way we create and distribute our work in a digital era (as I frequently am!), but I hope he would recognize that we have remained faithful to our mission to proclaim the Gospel, serve the spiritual needs of the Church and join the Congregation of Holy Cross as ‘educators in the faith.’”

Ave Maria Press has evolved as a leader in publishing Catholic high school religion textbooks, parish resources and books on prayer and spirituality. In the tradition of Holy Cross, Ave strives to make God known, loved and served through the spiritual, pastoral and catechetical books that are at the core of its publishing mission. “Father Sorin’s vision of deepening the faith remains the basis for everything that Ave Maria Press does today,” said Holy Cross Father Anthony Szakaly, chairman of Ave’s board of directors. 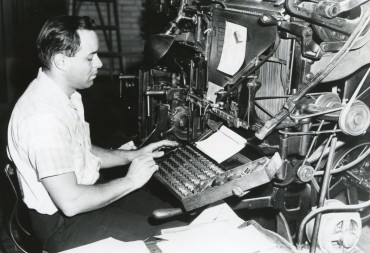 Holy Cross Brother Raymond Trottman who now lives at Columba Hall.
He was a typesetter.

Under the leadership of Holy Cross Father Daniel E. Hudson, who served as the third editor from 1875 to 1930, the magazine grew from 10,000 subscribers to 35,000. Throughout its life, the magazine boasted contributions from every important Catholic writer of the time, including Dorothy Day, Orestes A. Brownson and Msgr. Robert Hugh Benson.

During Father Hudson’s tenure, Ave began publishing hardcover books of inspirational Catholic stories. During the first five months of 1930, the serialization of “Patch: Memories of an Irish Lad” by Holy Cross Father Patrick J. Carroll, later the editor of The Ave Maria, appeared in the magazine. The complete work was published as a hardcover book in the same year.

Eight Holy Cross priests served as editors and publishers between 1865 and 1994, but Holy Cross brothers and sisters also have been an important part of Ave Maria Press as well. Holy Cross Brother Stanislaus, (John A. Clarke), was the first printer, pressman and proofreader for The Ave Maria. He trained Holy Cross sisters to set type, proof, fold and stitch sheets by hand. Mother Angela Gillespie did much of the editorial work for the magazine. About 1873, the sisters assumed more of the work at the magazine and served in a variety of roles, including writers and proofreaders, which continued until the 1950s. Holy Cross brothers served with zeal as typesetters and pressmen for more than 100 years. Traveling by foot, train, trolley, buggy and car, the brothers also acted as canvassers to get the magazine into Catholic homes and parishes in the United States, Canada and Australia.

Father John L. Reedy, editor and publisher from 1955 to 1983, oversaw the last issue of The Ave Maria in 1970. He wrote in that issue, “The identity of Ave Maria magazine submerges itself in a new effort to serve the religious needs to today’s audience.”

Ann Garrido, author of “Redeeming Administration,” praised Ave’s adaptability. “Even as the field of Catholic communications continues to undergo tremendous change in terms of available media, technology and demographics, Ave Maria continues to adapt without losing sight of its founding purpose. With an ear close to the ground, the Ave Maria team excels at what St. John XXIII called “reading the signs of the times.”

The publishing ministry continues in earnest. Ave Maria Press remains one of the oldest, continually operating Catholic publishing houses in the country.

“As the magazine evolved into Ave Maria Press, this ministry has touched the lives of countless individuals throughout the world who have been privileged to be inspired by the words of some of the best spiritual writers of our time,” said Holy Cross Father Thomas J. O’Hara, provincial superior of the U.S. Province. “In a world where so many search for guidance in their lives or grasp for spiritual insights, Ave Maria Press has become a leader in providing such guidance.”

Among Ave’s highly acclaimed titles are: Lisa Hendey’s “The Handbook for Catholic Moms”; “The Artist’s Rule” by Christine Valters Paintner; “Rebuilt” by Michael White and Tom Corcoran; and “A Book of Hours” by Thomas Merton.