FORT WAYNE — Couples and individuals who have experienced the acute and haunting pain of losing a very young child came together at Sacred Heart Parish Center, Notre Dame, on March 23 to begin a journey of healing.

Lisa Everett, director of Marriage and Family Ministry for the Diocese of Fort Wayne-South Bend and coordinator of the new ministry “ava’s grace,” designed the one-day retreat to help couples be more intentional about turning toward each other, and to God, in their grief.

“When we’re suffering a loss so profound, it’s tempting to think that God is far away. But we know by faith that God actually draws near, comes close to us when we suffer,” Everett said. “When Jesus was handed the scroll of the prophet Isaiah in the synagogue in Nazareth, he found the place where these words were written and proclaimed that today they were fulfilled: ‘The spirit of the Lord God is upon me, because the Lord has anointed me; He has sent me to bring good news to the afflicted, to bind up the brokenhearted.’”

It was her hope for the day, she said, that those words would once again be fulfilled.

“Jesus desires to bring good news to couples and families afflicted with grief and bind up their broken hearts. This is what He did for the first married couple canonized together in the Catholic Church: Louis and Zelie Martin, the parents of St. Thérèse of Lisieux, who lost four children: three in infancy and one in early childhood. Even now, they inspire and intercede in a special way for other couples whose pilgrimage to the house of the Father passes by way of such a painful cross as losing a beloved child before or after birth.” 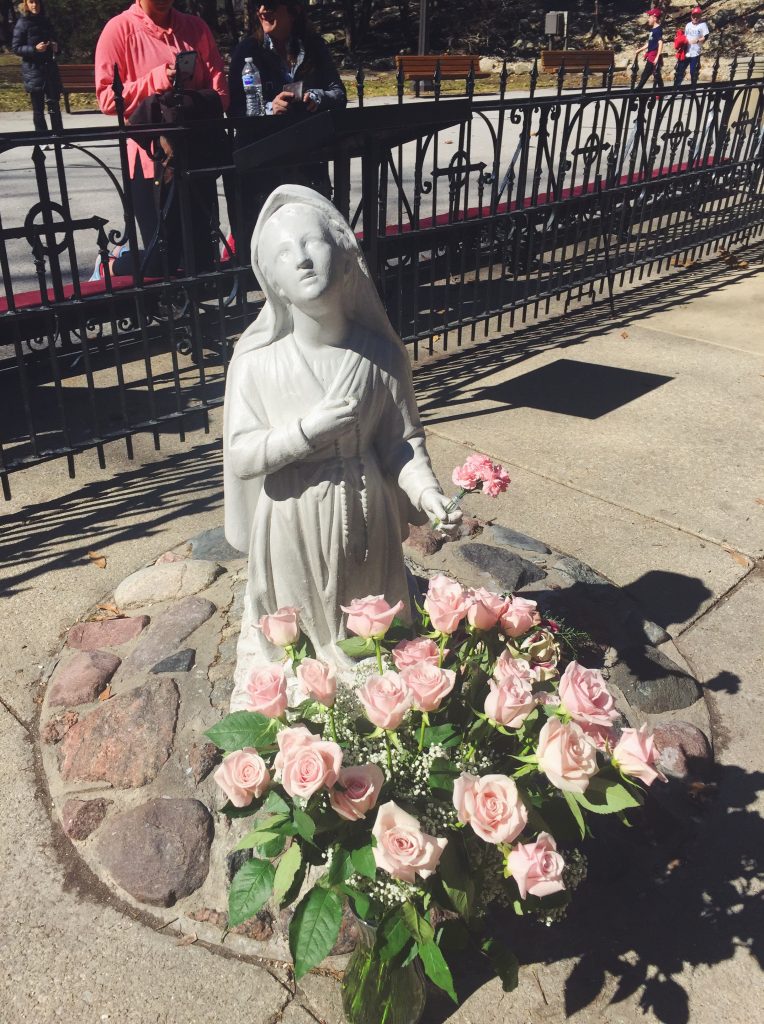 A vase of pink roses and baby’s breath is a gesture by parents of entrusting their children to Mary. The flowers were placed at the Lourdes Grotto at Notre Dame during a day retreat offered by “ava’s grace,” a diocesan ministry offered for those who have suffered the loss of a baby before or after birth. — Lisa Everett

John and Mary O’Callaghan, parishioners at St. Matthew Cathedral Parish, South Bend, witnessed about their journey in faith through the loss of several children due to miscarriage and stillbirth. Their talk was followed by a discussion.

“I think both of us were absolutely blindsided,” Mary said, of herself and her husband after experiencing the loss of their third child, Mary Elizabeth, who died at 7 months gestation. “First, we hadn’t imagined that anything like this could happen to us, and second, we were devastated by the depth of our pain. If anyone had said that we would have our hearts ripped out by the death of a child we had never met, I’m not sure I would have believed them. But it makes sense, of course, and speaks of the deep bond especially between mother and infant before birth, that the pain of separation is so great. … Anyone who has gone through this knows of the horrors we experienced during this time — having to give birth to a child who has died, being up on the delivery unit with other mothers and their babies, seeing an empty hospital basinet in the corner during labor and being acutely aware that there is none of the usual bustle of a delivery room as staff gets ready for a live baby, and finally leaving the hospital with empty arms.”

A fourth pregnancy also ended in miscarriage. A fifth happened right before the couple became familiar with NaProTECHNOLOGY, an approach to reproductive health that seeks to uncover and treat underlying causes of women’s reproductive problems, and Dr. Thomas Hilgers, who developed it. The connection and method enabled the couple to conceive and bring to term three children, although several more miscarriages also ensued.

“There were multiple occasions during our losses when I felt that we had been entirely abandoned by God,” Mary admitted. “The one time I remember most clearly was during labor with Mary Elizabeth -— I was walking the halls hooked up to an IV of pitocin to induce labor, and I remember feeling the most desolate I had ever felt. Every part of me cried out as Christ had on the cross asking God why He had forsaken us.” It seemed a mystery to her that “when we feel most abandoned by God, when we cry out to Him in the depths of our suffering because we do not feel Him near, we are actually sharing, by the power of the Holy Spirit, in the inmost life of God.”

“For me it was a revelation to think that I could be closest to the heart of God when I felt most abandoned by Him in this suffering. And that this grace was won for us by Christ’s incarnation and death on the cross.”

It also seemed that sometimes God manifested His presence to the family in other ways, she said. Small ways, perhaps, but they were unmistakable signs of His presence, giving them hope.

“And so, while there were moments when we felt abandoned — and yet were still held in the heart of God — we also learned to look for the small consolations God gave us that He was near.”

“We must always, of course, be ready to step out in faith, to know of God’s goodness when we cannot see it,” she concluded. “But it is one of the tender mercies of God that sometimes in the depths of our sufferings He offers us a glimpse of Him so that we can keep going.” 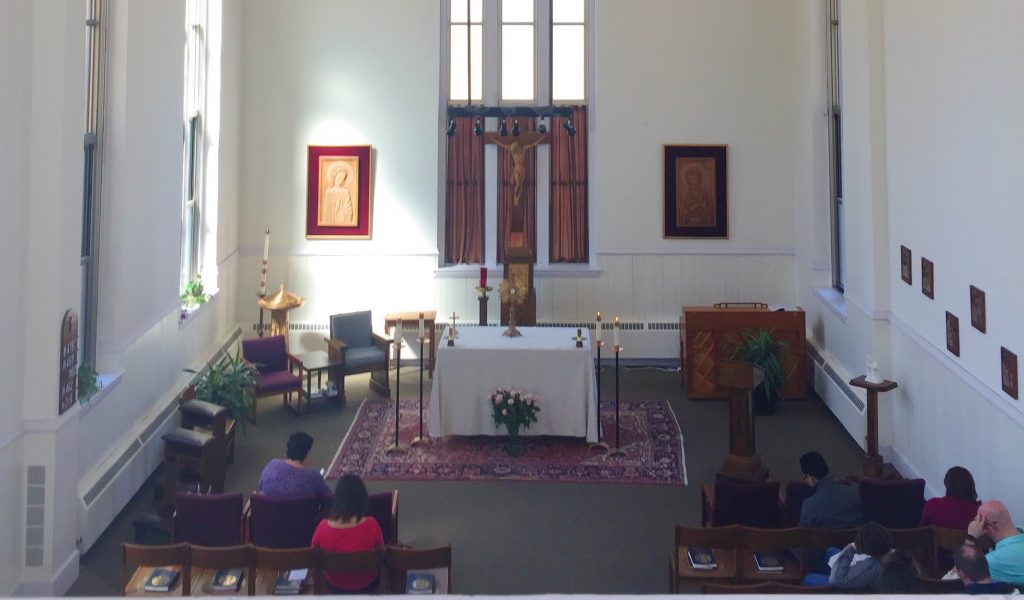 The participants were given direction on how to turn to each other and share, heart-to-heart, what they each felt when they lost their child. They were encouraged to share things they had not previously talked about with each other, as well as what was going on in their minds and hearts at the time — and since then.

Opportunities also were provided for the participants to talk with each other about the similarities of their losses, and for them to experience how the Lord draws near when they are distressed and distraught.

At the end of an hour of eucharistic adoration, each participant took a fresh rose and carried it to the Lourdes Grotto on campus, symbolically entrusting their child to Our Lady.

“The speakers were so insightful and really brought our own problems into perspective. If they survived, we can too,” said Andy Helms, who attended the retreat with his wife, Emily. “Too often we keep our emotions bottled up. I think bringing up our miscarriage in the past felt like reopening an old wound that never fully healed.”

It was great to hear stories of others who have experienced similar losses and to know she wasn’t alone,” Emily acknowledged at the end of the day. “I felt such a peace and comfort throughout the day that I haven’t felt in months.”