This year’s celebration marked the final time that Sister M. Elise Kriss, OSF, USF president since 1993, would deliver the president’s address following Mass celebrated by Bishop Kevin C. Rhoades. Sister Elise, a member of the Sisters of Saint Francis of Perpetual Adoration, which sponsors the university, will retire following the 2019-20 academic year. 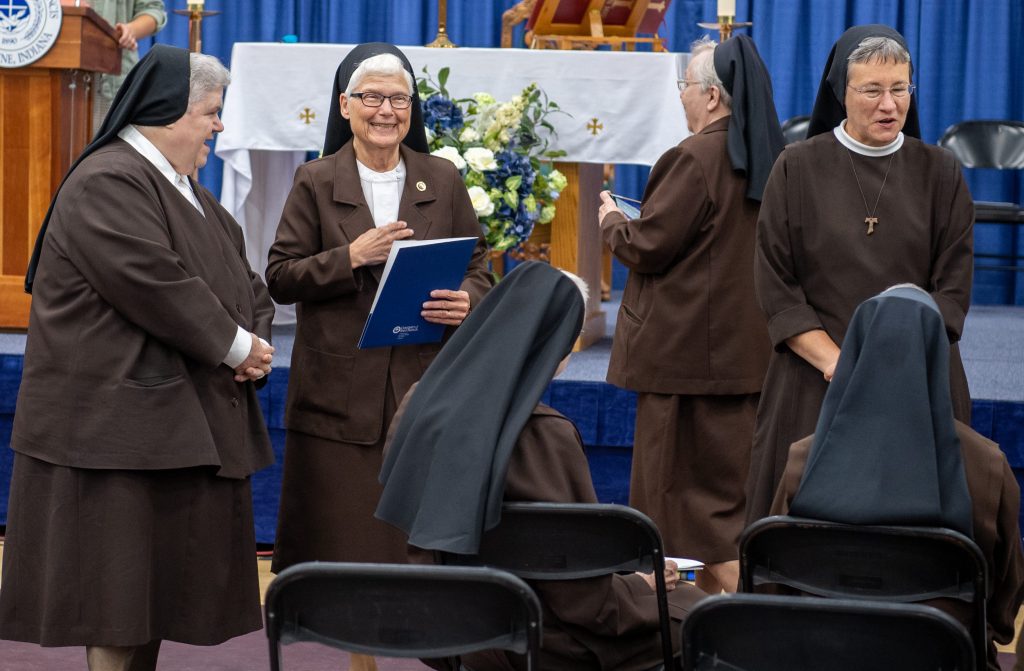 University of Saint Francis president Sister M. Elise Kriss, OSF, second from left, prepares for this year’s Founders’ Day Mass and Convocation at Hutzell Athletic Center Aug. 28 with fellow Sisters of St. Francis of Perpetual Adoration. Sister Elise will step down as president of the university at the end of the academic year. — John Martin

The Mass marked the feast of St. Augustine. Bishop Rhoades called St. Augustine “a man of great passion and faith, a brilliant philosopher and theologian.” He encouraged the students and others to use this father of the Church as an “example and intercessor.”

The Mass was concelebrated by Father Joseph Gaughan, pastor of Most Precious Blood Parish, Fort Wayne, and a member of the USF board of trustees.

In his homily, Bishop Rhoades shared that his favorite book during his college years was “The Confessions of St. Augustine.”

“Reading the Confessions, we see that Augustine was a passionate seeker of truth, the truth about himself, the world, life and ultimately the truth about God,” the bishop said.

He also pointed out that in Augustine’s youth, he “had a deep restlessness in his soul…searching for meaning in his life.” 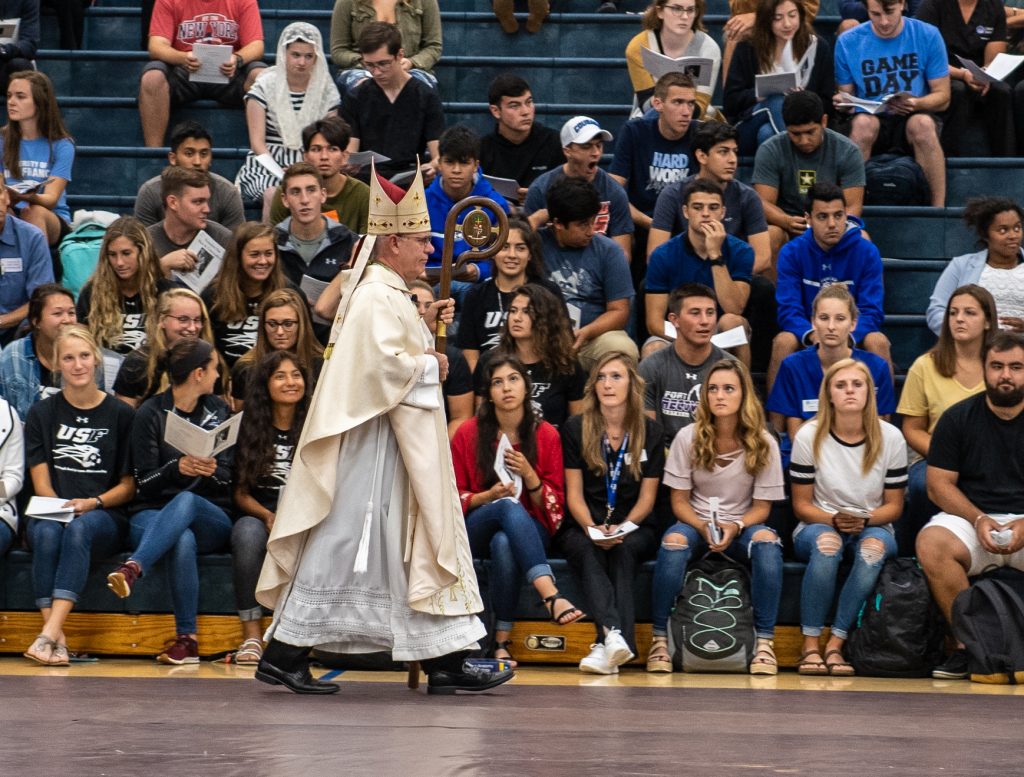 Bishop Rhoades described the rocky road of Augustine’s young adult life, which included fathering a child out of wedlock and seeking truth in “erroneous philosophies.” When the young man began to listen to the preaching of Bishop Ambrose of Milan, his life changed.

One day, the future saint heard children nearby singing “tolle et lege,” meaning “take and read” in Italian. It was then that Augustine “took up the letters of St. Paul and read the first text his eyes laid on… from Paul’s letter to the Romans: ’Put on the Lord Jesus Christ and make no provision for the flesh.’”

Bishop Rhoades said he wanted the students to consider their own journey in light of Augustine’s search for “meaning and purpose in his life.”

He said that a Catholic university “does not have a merely utilitarian approach to education. … The aspiration for truth is more important than mere technical know-how or cold and purely functional data. This is a time of formation in your life.”

He encouraged the students to make their college years a time of “conversio,” of turning to God, rather than “aversio,” turning away from God. “Don’t just live superficially. Don’t be afraid to seek the truth. Be open to God and His grace.” 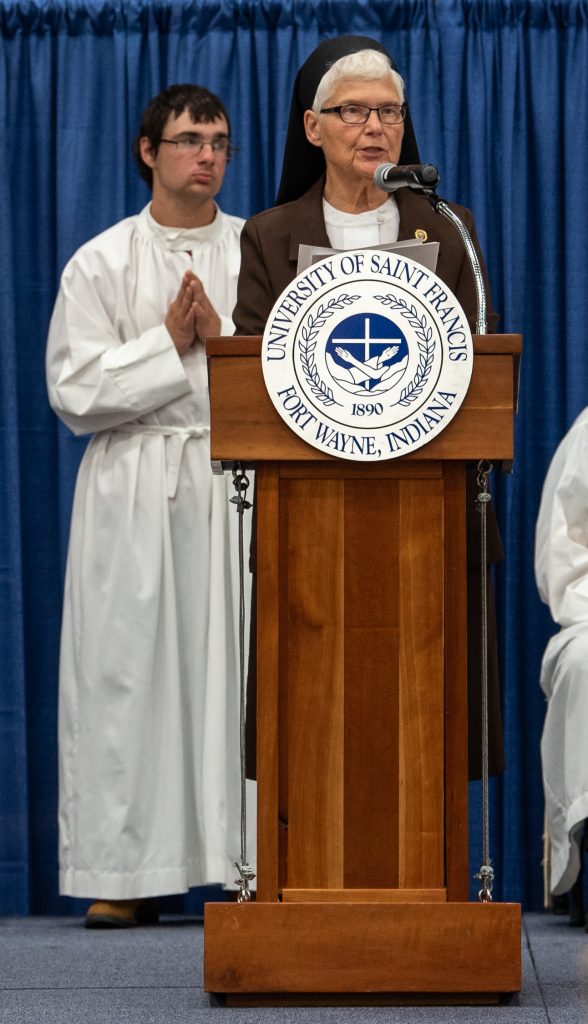 In her remarks at the end of Mass, Sister Elise echoed Bishop Rhoades’ call to seek the truth. Celebrating the Eucharist at the beginning of the academic year “helps us focus on what is central to our mission as a Catholic university, the integration of faith with all that we do as an academic community,” she said.

She commended the president of the Student Government Association, Margaret Mary, for leading the students in reciting the USF Honor Statement, which “defines how each student will live out the Franciscan Values with honesty and integrity; holding themselves and other accountable to the traditions of the University of Saint Francis.”

Sister Elise pointed out that the university is rooted in the traditions of faith and reason, referring to “Ex Corde Ecclesiae,” St. John Paul II’s document on Catholic higher education. The document calls Catholic colleges and universities to “promote dialogue between faith and reason, so that it can be seen more profoundly how faith and reason bear harmonious witness to the unity of all truth.”

One example of how the university strikes this balance, she said, is daily sacred time from 11:30 a.m. to noon. “During this time, no university-sponsored activities are scheduled, so you have time for some form of personal devotion.” During that half hour, the university has eucharistic adoration on Mondays and Mass Tuesday through Friday, all in the St. Francis Chapel. 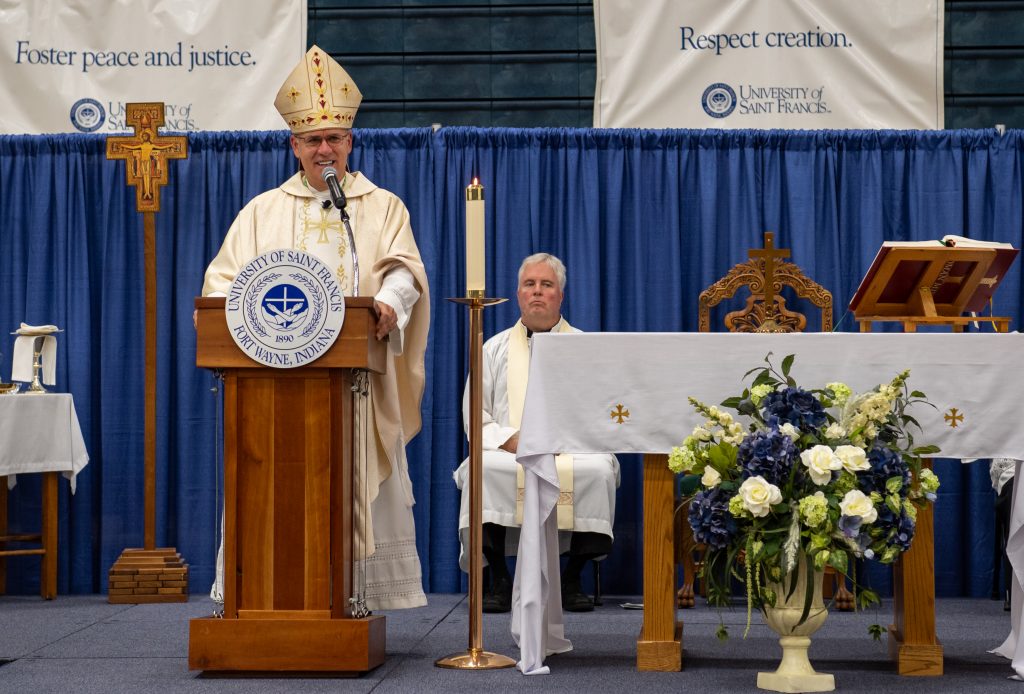 Make the college years a time of turning to God and seeking the truth, the bishop told students. Father Joseph Gaughan, right, concelebrated the Mass with the USF community at Hutzell Athletic Center in Fort Wayne. — John Martin

Every year, the university focuses on an aspect of the Franciscan values that encourage respect for the dignity of each person, the encouragement of a trustful, prayerful community of learners; service to one another, society and the Church; fostering peace and justice; and respecting creation. This year’s emphasis will be on respect for the creation. Sister Elise encouraged the campus community to read Pope Francis’ 2015 letter to the world, “Laudato Si.”

“The pope’s letter joins together the Church’s social and moral teachings while drawing upon the best scientific research to provide a foundation for us to discuss our concern for our planet and every living thing that dwells on it, especially the poorest and most vulnerable among us,” she said.

Sister Elise welcomed a contingent of sisters from her community in Mishawaka who came for the celebration, remembering that the university was founded in Lafayette in 1890 and moved to Fort Wayne in 1944.

“The sisters continue to sponsor and support the work of the university here and at our sites in Crown Point and Lafayette. Be assured that all the sisters are praying for us and for blessings on the new academic year.”

Sister Elise concluded her remarks by reporting that the school’s enrollment on Aug. 26, the first day of class, was 2,299, a 3% increase from last year.