VATICAN CITY (CNS) — With the celebration of Christmas just around the corner, Christians should look for ways to share the joy of Jesus’ birth rather than draw up a laundry list of complaints, Pope Francis said.

Speaking to pilgrims gathered in St. Peter’s Square for his Sunday Angelus address Dec. 19, the pope said that the temptation to complain can “ruin so many lives, because one starts complaining and complaining, and life drains away.”

“Complaining always leads you to look for someone to blame,” he said. “If we proceed with the tired step of grumbling and talking, we will not bring God to anyone, we will only bring bitterness and dark things.” 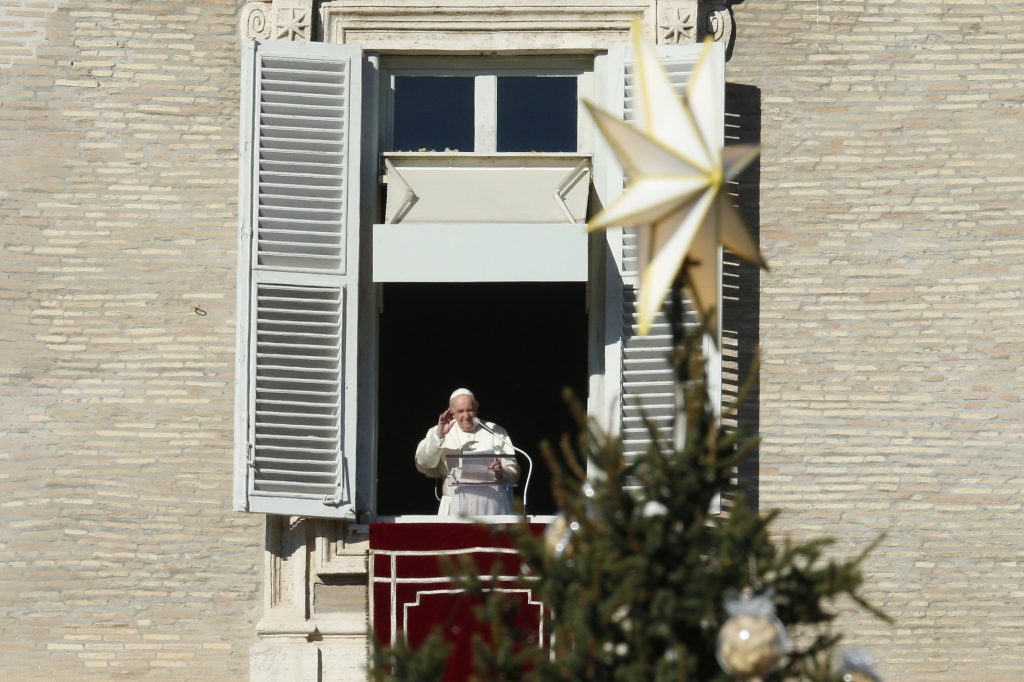 The Christmas tree is seen as Pope Francis leads the Angelus from the window of his studio overlooking St. Peter’s Square at the Vatican Dec. 19. (CNS photo/Paul Haring)

The pope’s reflections began with the Sunday Gospel reading from St. Luke which recounted Mary’s visit to her cousin Elizabeth, even after receiving the announcement from the angel that she was to give birth to the son of God.

Mary, the pope said, did “not stay at home, thinking over what has happened and considering the problems and pitfalls, which were certainly not lacking because, poor girl, she did not know what to do with this news given the culture of that age.”

Instead of thinking of herself, she “thinks about someone in need, she thinks about Elizabeth, her relative, who was of advanced years and with child, something strange and miraculous,” he said.

“She went out to help. How?” the pope asked. “By sharing her joy. Mary gives Elizabeth the joy of Jesus, the joy she carried in her heart and in her womb.”

Recalling that Mary “arose and went,” Pope Francis encouraged Christians to be guided by those two verbs during the last days of Advent.

Mary, he explained, got up and went to see her cousin despite the difficulty that her “unexpected pregnancy exposed her to,” including misunderstandings, punishment and even death.

“She did not look down at her problems, but up to God. And she did not think about whom to ask for help, but to whom to bring help. She always thinks about others: that is Mary, always thinking of the needs of others,” the pope said.

Christians, he added, must do the same “and look for someone to whom we can be of help,” such as the elderly, the lonely or someone in need of service. In doing so, “we help ourselves to rise up from difficulties.”

Mary’s action of going in haste to see her cousin is a reminder that Christians should not live their lives “with agitation, in a hurried manner” but instead proceed “with a joyful step, looking ahead with confidence, without dragging our feet, as slaves to complaint,” he said.

Instead, Pope Francis said, Christians should “cultivate a healthy sense of humor,” and “the first act of charity we can do for our neighbor is to offer him or her a serene and smiling face.”

In doing so, Christians “bring them the joy of Jesus, as Mary did with Elizabeth,” the pope said.