The churches in Steuben County will bring a bit of comfort to residents who find themselves alone on Christmas Day this year. Thanks to a collaboration between them and Caruso’s restaurant, box meals will be provided to anyone who wishes to partake on a first-come, first-served basis from 1-3 p.m. Christmas Day at two locations in the county.

Father Robert Showers, OFM Conv., is pastor of St. Anthony of Padua Parish and St. Paul Chapel in Fremont. He explained that the idea came about from the deep sense of community that makes Steuben County special.

“A coalition of three churches in Pleasant Lake has held a Thanksgiving dinner every year for many years,” he said. “They bill it as a community dinner, to which everyone is invited, whether they can afford it or not. That is to emphasize that it’s not a handout to poor people.” 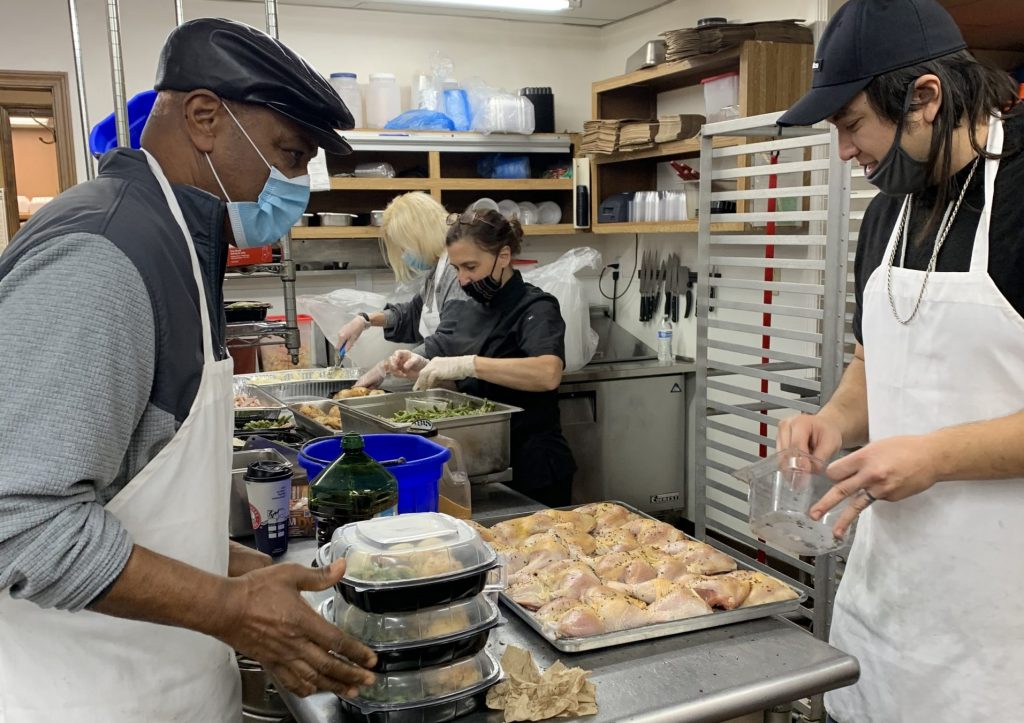 Last year, that same group of churches extended this hospitality into the holiday and revived a lost tradition of hosting a sit-down meal at a local public school for Christmas. “It worked out really well. About 125 people came. … We had agreed then that we’re definitely doing it again for Christmas 2020,” Father Showers said. But COVID-19 changed those plans and the churches had to rethink the meal plan, making it a take-home meal instead.

Liat Peters and Lisa Aldrich, along with their brother, Dan Caruso, own Caruso’s restaurant, the business their own parents started more than 40 years ago. The family members are longtime parishioners at St. Anthony ever since they moved to the area from Fort Wayne.

With so many Christmas plans canceled this year, the siblings were “looking for a way we could contribute, because that left a hole,” said Aldrich.

When they heard about the idea to provide a box lunch in lieu of an in-person dinner, they jumped aboard.

“Our motto in our family has always been ‘food is love’ … so to provide meals for the needy on Christmas Day seems like the perfect way to show love,” Peters continued. “We feel fortunate to be in this county, where it’s such a faith-filled community.”

Steuben County has numerous churches and three separate ministerial associations for the cities of Angola, Fremont and Pleasant Lake. As the only Catholic church in the county, St. Anthony is involved in all three. Father Showers said that as a collective group, the churches “have found over the years that … we have been very interested in doing things together that reach out and help society.” 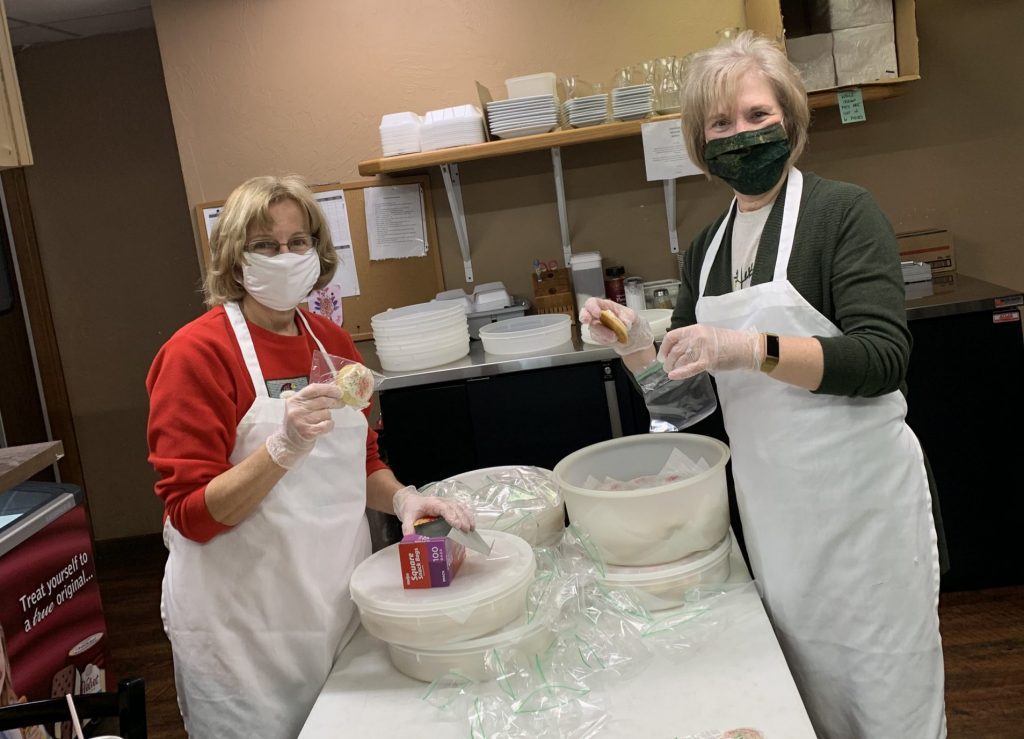 One of these projects is Cahoots Coffee Café, a nonprofit café in Angola that provides a safe environment for young people to meet and socialize: “Because when you’re there, you’re in cahoots,” Father Showers joked. This joint effort has grown over the years and is now run by a board made up of five churches.

With these partnerships already in place, finding volunteers to help with things like the Christmas meals is never an issue. Father Showers said. “If anything, we have an embarrassment of riches.” Because less volunteers are required for a carryout dinner than a dine-in event, for this year’s dinner he expects an overabundance of helpers.

Peters told of one participating church that had budgeted money early in the year for community-building projects that were put on indefinite hold due to the pandemic. Since the members had been looking for a way to spend the budgeted money, the Christmas meal project was a godsend.

Churches are not the only organizations involved in the Christmas meals. Miller Poultry in Orland donated a large number of chickens for the meals. Another of St. Anthony’s parishioners who works for Stanz Foodservice in South Bend brought the company on board to help defray the costs, and Caruso’s salesman from Gordon Food Service also enlisted his company’s aid to donate to the dinner. 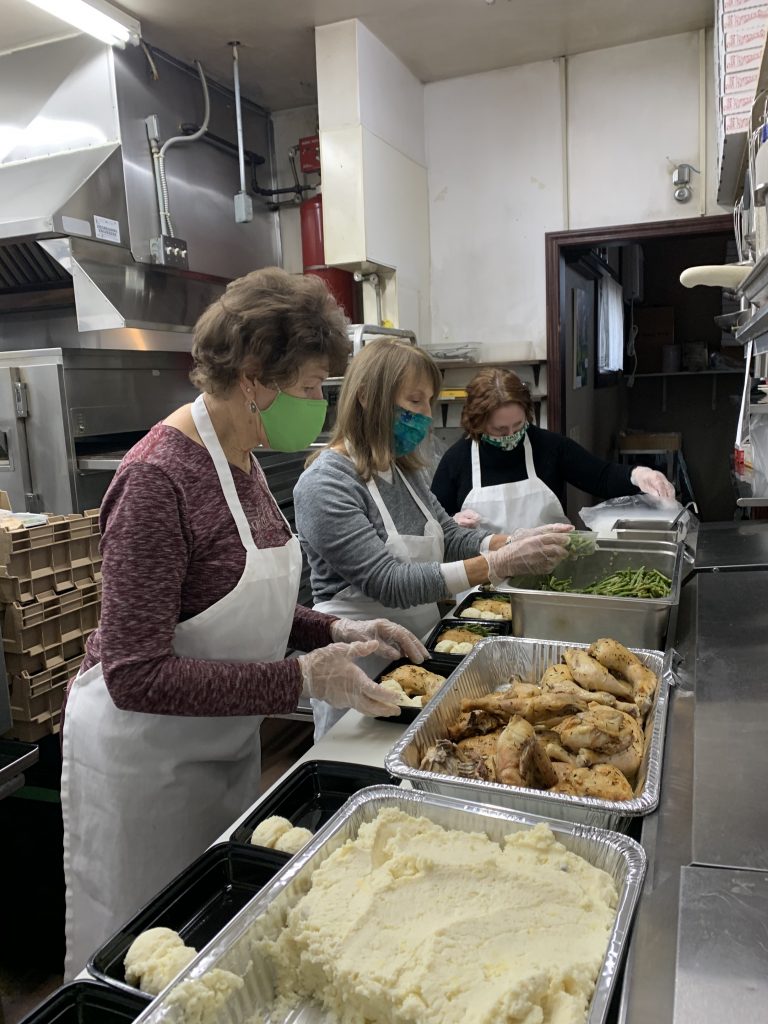 The hardest part for Father Showers was that the meal was not intended to be strictly about food, but about giving those who have no one else a sense of home life, at least for one day.

“I wish we could have a sit-down. Part of the beauty both at Thanksgiving and Christmas is to sit together and be together, including people who maybe don’t get together with other people very often, or who don’t feel welcome very often. So it isn’t quite the same, just handing things out.”

It was decided that, while they could not offer conversations and camaraderie, they could offer messages of encouragement in the forms of handwritten Christmas cards. These will be included in the packages that will be handed out to those who receive a meal. Father Showers emphasized that, “We’re hoping those cards help and this is a promise of better things to come. Even if we can’t be together in one big room, we don’t want to forget people.”

Aldrich added, “We want these people who are receiving a meal to feel like they are connected in some way. … And the amount of people coming forward saying, ‘I’ll help, I’ll help’ is really awesome.” 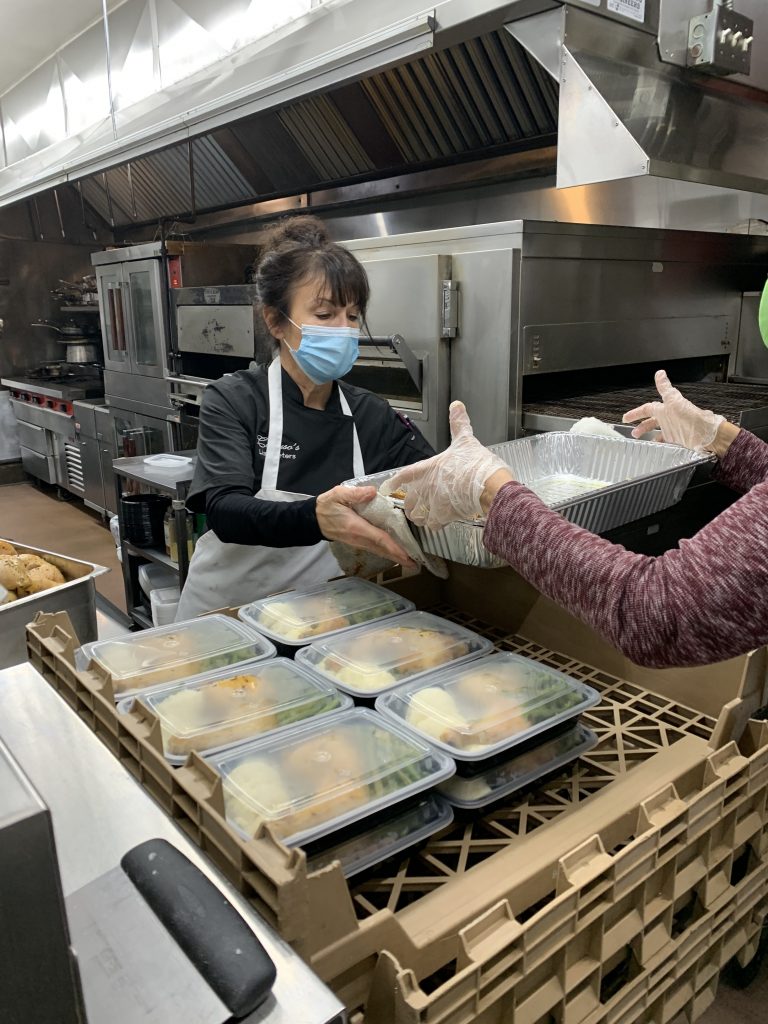 Peters and Aldrich provided a location to prepare the food prior to distribution and hands to help cook it. Some of their employees have given their own time to assist in this process. The sisters have even gone so far as to make homemade cookies to add to the packages. A total of 300 meals were pre-cooked and put in microwavable containers so that participants only need to put them in the microwave to enjoy a hot Christmas dinner. None of the coordinators know how many people to expect and whether they will have leftovers or run out of meals.

The two distribution locations will be the parking lots of St. Anthony and Fremont Community Church. “In the past,” Father Showers emphasized, “we’ve done things in Angola: For this project, we’re trying to also include a bigger part of the county. That’s why we wanted to make sure the Fremont churches and the Pleasant Lake churches were also involved. “We can do a whole lot more together than each one by ourselves.”

Father Showers is finding other methods of keeping the spirit of Christmas alive for his parish and the local community, as well. Drive-by Nativities, story time with Santa and jingle bells for Christmas Masses are all fun ways the parish has found to provide cheer amid the pandemic.

None of these measures are ideal, of course, and the churches are sincerely hoping that by next year they are able to host the Christmas meal in person.

“We don’t want to make it ‘the churches’ helping ‘the unchurched’ or anything like that,” said Father Showers. “We’re all here together, and now we’re going to share something together.”