Four Warsaw residents are among the thousands of men across the globe voluntarily traversing a raw, 90-day challenge of prayer, asceticism and fraternity.

It’s Exodus 90, and for the men who go through the program, it’s life-changing.

Doug Jakubowicz, Roberto Perez-de-Frias, Mike McClain and Nic Alles began Exodus 90 more than a month ago at Sacred Heart Parish. Of the four, Jakubowicz was the only one to have gone through the program before, about two years ago at St. Francis of Assisi Parish in Muncie.

Father Brian Doerr, pastor at St. Francis, developed the program in conjunction with five seminarians when he was vice-rector of human formation at Mount St. Mary’s Seminary in Emmitsburg, Maryland. Exodus 90 came to consist of 90 days of spirit-awakening, severe self-discipline and avoidance of all forms of indulgence: It goes well beyond a once-a-week fast. It’s a cold-showers, no-sweets-or-alcohol and no-unnecessary-screen-time kind of fasting. 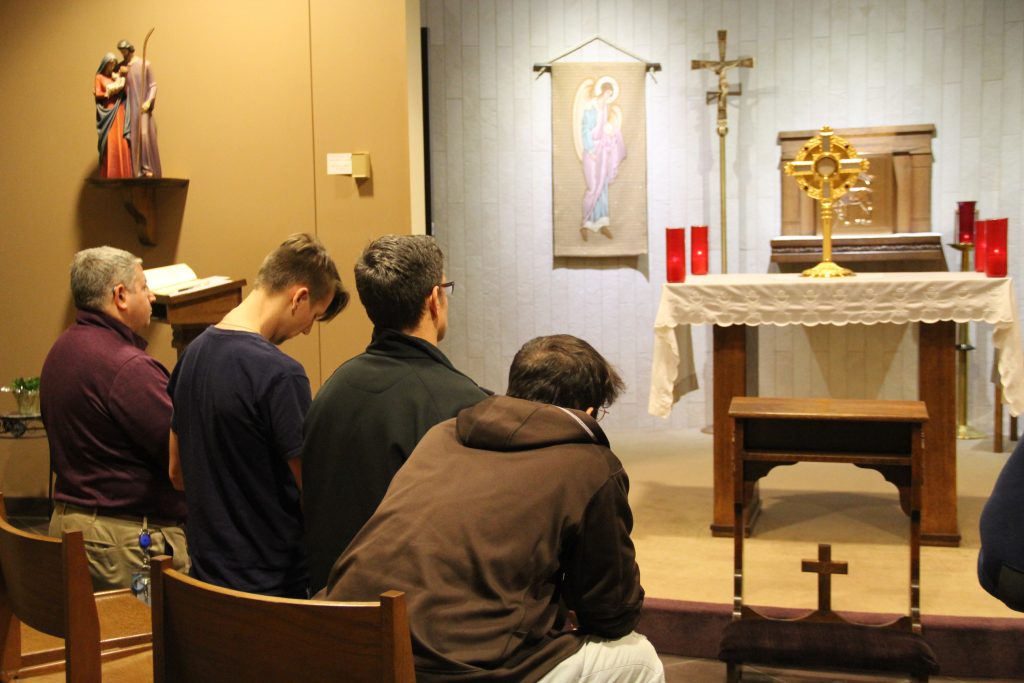 Jennifer Barton
Prayer and fraternity are two pillars that hold up the third and most difficult pillar of the Exodus 90 program for men — the extreme asceticism. Roberto Perez-de-Frias, Doug Jakubowicz, Mike McClain and Nic Alles end a weekly meeting by spending their daily holy hour together before the Blessed Sacrament at Sacred Heart Church in Warsaw.

One of the first participants in the program as a seminarian was Father Jonathan Norton, who brought it to Sacred Heart in 2018 to help the male parishioners deal with the abuse crisis. He found the men of the parish “hungry for a response.”

He stated that while they alone could not fix the problems of the Church, they could “fix things close to home — fix ourselves, our parish.” Over 40 men joined that first group, and the program has been offered yearly since. Father Norton now serves as each group’s spiritual director throughout the process.

Although Exodus originated in the seminary, it has been taken up by laymen around the Diocese of Fort Wayne-South Bend and across the world. Four different ages and stages of life are represented in the Warsaw group, demonstrating its broad appeal: Two men in the group are married with children of different ages, one is engaged and one is single.

Each man who chooses to begin Exodus 90 must name his ‘why,’ as McClain put it. As the new principal at Sacred Heart School, he learned about the program through direct contact with Father Norton, who told him that it was something “we” did. “If it’s a thing ‘we’ do, then I’m part of ‘we’ now, so I’ll do this, too,” McClain decided. “I’m doing this to get closer to God and my family.”

Perez-de-Frias gave a similar reason. “The time that you now have available for the things you don’t always pay attention to; helps you get closer to God. That’s my why, the reason I’m here.”

Part of Jakubowicz’s motivation to repeat the Exodus 90 experience again was his upcoming nuptials.

“I saw a lot of fruit come out of it (the first time), but I saw myself slipping in some areas. … I wanted to be the best man I could be going into marriage.”

Alles joined when McClain sent a group text about the program to the parish basketball team. His “That’s kinda cool” response turned into a “Yes,” and he committed without having read up on what was involved in the daily asceticism. Ignorance was bliss, he said, because “had I read what Exodus 90 was before joining, I wouldn’t have done it. Not in a million years. I’m very grateful to have said ‘yes’ without knowing because the struggles have put my life in a different spot than I was before the 38 days and I’m grateful for that.”

Fraternity plays an essential part of the spiritual exercise. This was important for Jakubowicz, who moved to Warsaw recently and became a member of the parish. “It’s a great way to meet people, to build deep relationships with them,” he said.

Perez-de-Frias spoke of the struggles that they each faced during the process, and how they were able to overcome them because of the fraternity. “When we’re struggling the most, having each other makes a big difference. And the fact that we have each other as anchors helps keep ourselves in check as well.”

An essential part of the program is for each man to have an “anchor,” or another team member with whom they are to check in daily either by text or phone call. “I love the motivation that the fraternity piece puts in it to keep the motivation going. Don’t disappoint yourself or God or your fraternity brothers,” said Perez-de-Frias.

He and McClain have received support from outside their four-man group as well. Other parishioners who previously have gone through Exodus 90 have checked in on their brothers in Christ. McClain said that makes him feel like others are “always kind of looking out for you, which is encouraging. It strengthens your resolve. No matter how hard those cold showers are or how much I want to check on those Cubs, it’s not happening because I’m not gonna let anyone down.”

Self-sacrifice is difficult, as Alles also attests. He admits that when he started missing his video games a couple weeks in, he had something of a revelation.

“Did I ever think while I was playing video games, ‘Wow, I really miss God, I should probably pray’? No, I wasn’t. It put things into perspective. I’m glad to reestablish a much-needed relationship in my life.” 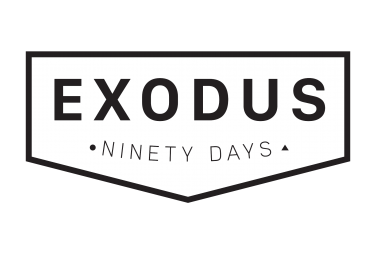 When asceticism is applied, especially in the form of cutting out screen time, men often are amazed by how much time they actually have during the day. Both McClain and Perez-de-Frias found themselves spending more time with their families, becoming better husbands, fathers and professionals.

“That time that I used to waste with all that other stuff now I’m filling with God or family or both,” said Perez-de-Frias. “I need to be a better Roberto for myself, my wife, my kids.”

Alles is also filling his time with prayer, rather than movies or video games. McClain has used his free time to study the lives of the saints, particularly St. Joseph.

When the 90 days are over, all four plan to continue certain aspects of the program, particularly the prayer life. “When we miss our holy hour, our day just isn’t the same,” Jakubowicz said. Not one of them is willing to lose the closeness they have found as brothers in Christ.

Will they do the program again?

“We’ll talk about it next year,” Alles joked.

For now, the four men plan to continue working toward the finale of the 90 days and looking forward to day 91: Easter Sunday.