The Conventual Franciscan Friars of Our Lady of Consolation Province have been a part of the St. Anthony of Padua Parish and St. Paul Chapel communities in Angola and Fremont for as long as most anyone there can recall – 91 and 81 years respectively. So, the sadness at their imminent departure showed in the faces of parishioners at Saturday vigil Mass on June 18, when Bishop Kevin C. Rhoades came to honor the friars’ service and bid them goodbye alongside the parish community. Their “Forget Us Not” farewell Mass and reception drew a full crowd of parishioners, several members of their order and a couple of Franciscan sisters. In total, there were 11 Franciscans at the Mass, including the previous and newly elected provincials of their order.

More photos from the event.

The Conventual Franciscans made the difficult decision this year that due to decreasing numbers of vocations, they could no longer manage so many parishes. The Diocese of Fort Wayne-South Bend graciously agreed to staff St. Anthony of Padua with diocesan priests. The announcement was made to the parish on February 5 by Father Wayne Hellman, OFM Conv., the former provincial. 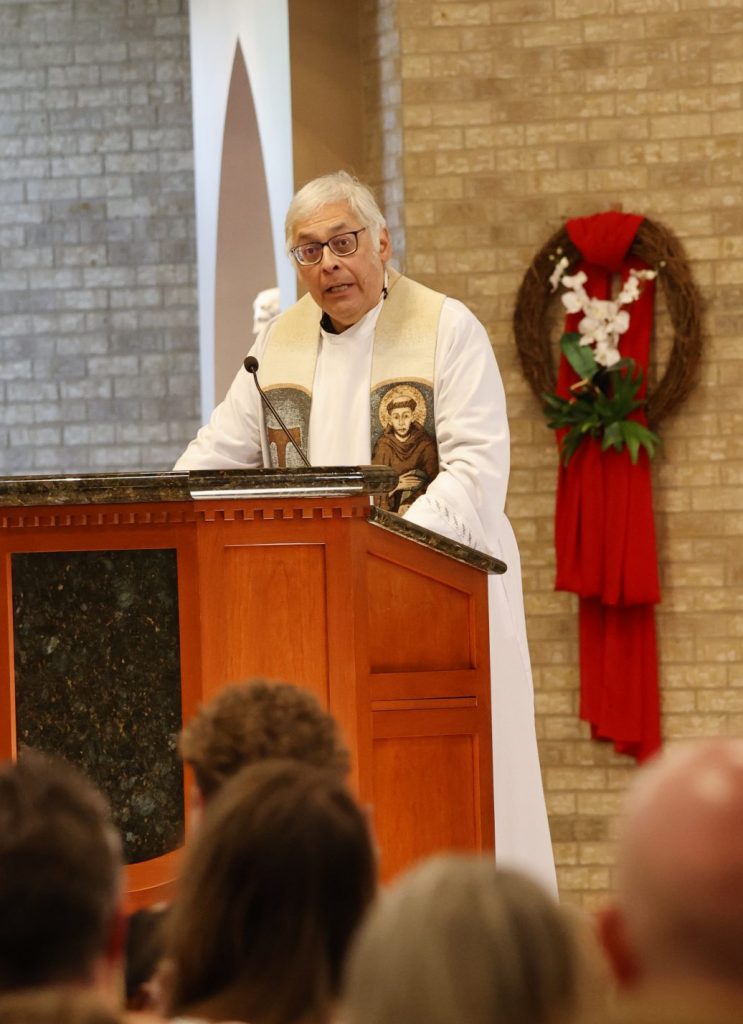 Father Bob Showers, OFM Conv., has served as Pastor of St. Anthony of Padua and St. Paul Chapel for the past eight years and will be going to another parish headed by the friars in Terre Haute.

As they prepare to depart, though, the friars leave their people with great hope for their future.

Father Bob Showers, OFM Conv., Pastor, is confident that he will leave the parish in good hands, as Father Osman Ramos takes over his role, with Father Jose Raul Marroquin-Monroy serving as Parochial Vicar, both beginning on June 28.

Father Showers has been pastor for the past eight years, succeeding Father Fred Pasche, OFM Conv., who served for 17 years before retiring. Father Pasche witnessed the building of St. Anthony of Padua’s new church. For him to come back for such an occasion was “sad,” he said, though he admitted that it had been difficult for him to leave the parish eight years ago.

Many of those present saw the change as “inevitable,” as Father Pasche said. Father Showers commented how the pandemic had claimed the lives of roughly 10% of the province, with too few young men to replace them. He also noted how the parish had witnessed the loss of two of their priests and the aging of those who were left. However, the change also gives both the Franciscans and the diocese a new mission upon which to focus. 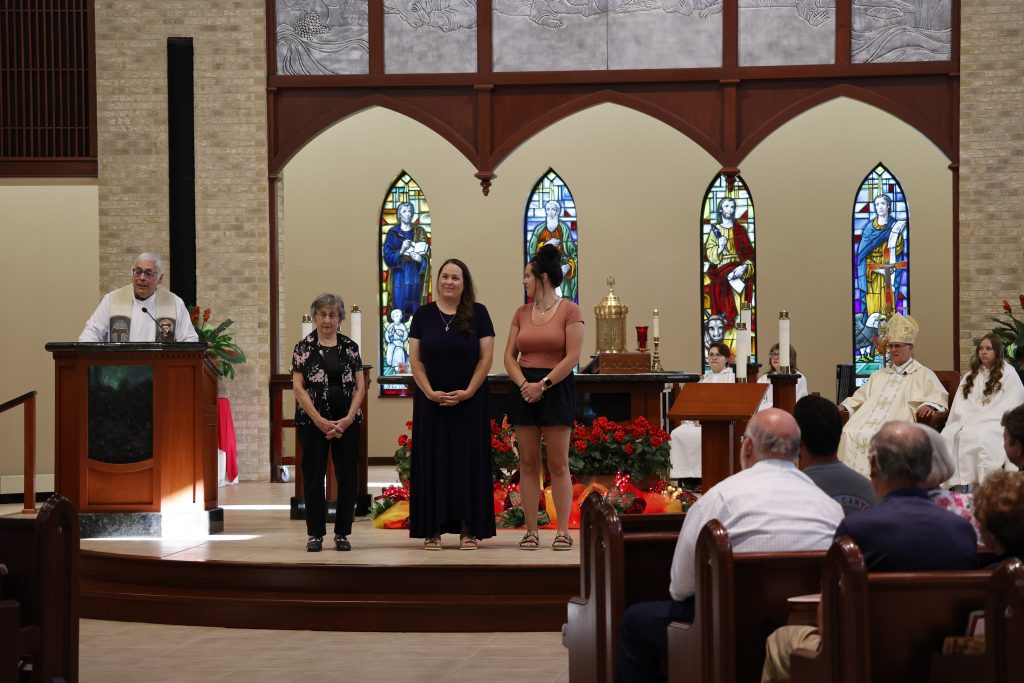 Photos by Jennifer Barton
Father Bob Showers, OFM Conv., speaks to the crowd of parishioners in attendance as he handed out awards to the families of three women who helped the parish in its early years.

Father Showers sees the Franciscans leaving as a natural process in spreading the faith. “Since 1492, the history of the Catholic Church both North and South America has been a group of mendicant friars like the Franciscans, the Dominicans, come to a place first, found a parish, and we would usually work there from between 80-100 years. And then it was time for us to move on and an apostolic order like the Jesuits or the Paulists would take over, get things on a very solid footing and be there for 80-100 years, move on, then the diocesan priests would come. We’re basically doing the same thing here, except we cut out the Jesuits as middlemen; we’re going directly to the diocese. But leaving after 80-100 years is what we’ve done on this side of the world for 500 years now.”

The farewell nights that the parish hosted both on this occasion and earlier in the week helped parishioners come to terms with the friars’ departure, secretary Patti Webster believes. Father Showers admits that it has finally sunk in that he will be leaving the parish that has been his home for the last eight years, and the three priests will all be assigned to different locations, with Terre Haute as his destination.

Peter Walters, President of the St. Vincent de Paul Society at the parish, was active at St. Anthony of Padua more than 50 years ago as a Trine University student. Since moving back to Steuben County, he has re-entered parish life in the last five years.

“I love the Franciscans here,” he said, but respectfully added that: “I think the bishop made a great move. He did what he needed to do.”

Walters is excited to welcome the new, young priests coming from LaGrange County, both of whom hail from Central America, and he hopes that the lessons learned from the friars will be deeply instilled in the parish members. “Every parish should be a strong community. We should accompany one another. The Franciscans taught us how to do that, and I think we’ll do ok.”

At the end of Mass, three women were recognized for their part in aiding St. Anthony of Padua in its early years: Mary Kundart Cimbal, Marie Nucci Bolin and Frances Van Wagner, the former two who have passed from this life. Two of Bolin’s granddaughters represented her that day. One, Gina Cocanower, ruminated on the family’s history at St. Anthony of Padua, recalling sacraments of baptism, first Communion and weddings performed by the friars.

“It’s pretty nostalgic. It’s going to be a change, for sure,” she said. “We don’t know what to expect with the new priests … so it’s a lot to learn.” She admitted that: “It’s kind of exciting to have a new chapter here and see what the new priests have to bring in” and noted that her own children will be “raised in a different aspect of the Catholic Church now.”

Even with the changes, the Catholic community in Steuben County will maintain spiritual unity with the Conventual Franciscans. As Bishop Rhoades said in his homily, “On this feast of Corpus Christi, we ponder the great mystery of the holy Eucharist. One of the amazing things about the Eucharist is that it unites earth and heaven. Our communion in the Body and Blood of Christ unites us beyond space and time. So, when we gather for the Eucharist, we are united not only with the people in the church where we are present for Mass, but also, as I mentioned earlier, with the saints in heaven and the souls in purgatory. We are also united with all our brothers and sisters in the Church throughout the world. When I celebrate Mass, I am always aware of this tremendous mystery of communion. Dear parishioners, you can also be aware that, even though the friars are leaving St. Anthony’s, your communion with them will remain every time you gather here for the celebration of Mass. And their communion with you will remain every time the friars celebrate Mass.”