INDIANAPOLIS (CNS) – D. Anne Jones knew she wanted to use her gift of painting portraits to help others in some way.

“I was talking to a friend who worked for (the nonprofit) Flashes of Hope taking pictures of kids with cancer, and a lot of the time, those were the last photos a family would have of their child,” she recalled. “I decided if I did a nonprofit, I could paint portraits at no charge and raise money to fund them.”

But it took tragedy to solidify the idea.

“I was in shock,” said Jones, a member of St. Alphonsus Liguori Parish in Zionsville, just north of Indianapolis in the Diocese of Lafayette-in-Indiana. 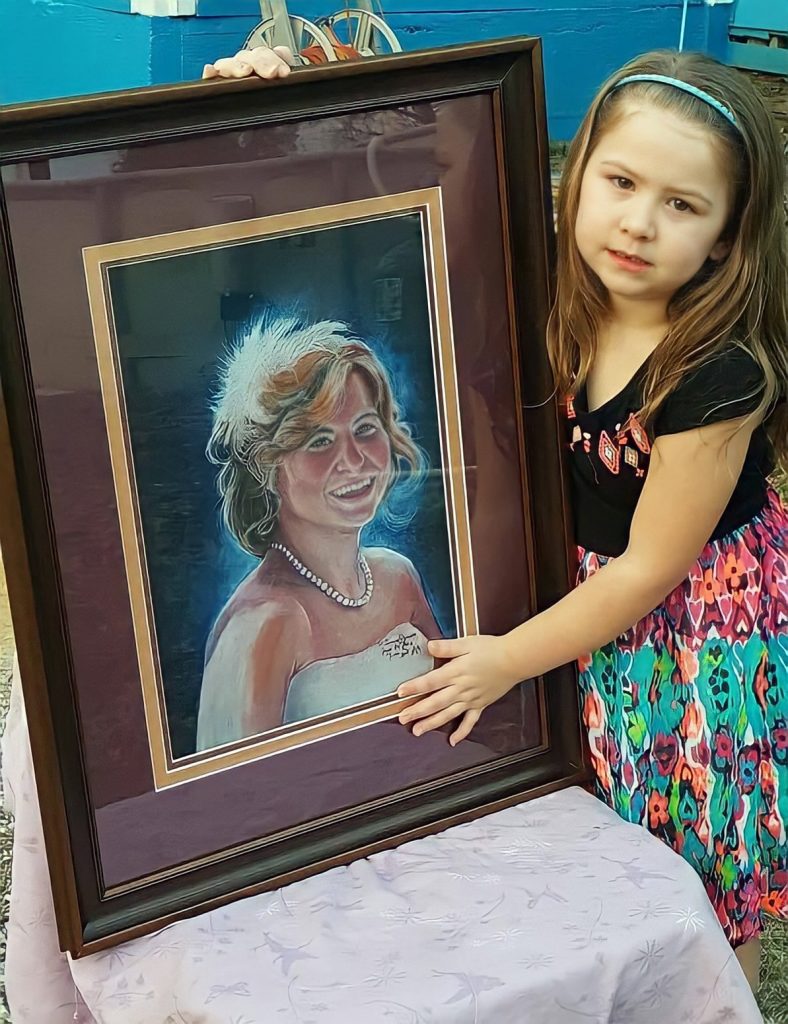 From her loss, Jones identified who she wanted to paint portraits of and for whom she would create them.

“I paint portraits at no charge for families or individuals who lost a loved one to a sudden, unexpected or tragic death,” Jones said of her nonprofit organization, Face to Face Fine Art.

“My goal is to help aid in their grieving process and commemorate and honor the deceased by creating a lasting memory of their life.”

She told The Criterion newspaper of the Indianapolis Archdiocese that her effort is “an outlet that became a calling,” of which God is very much a part.

Losing her daughter in 2019, becoming guardian of her granddaughter and moving to a new part of Indiana in the midst of the COVID-19 pandemic proved only to strengthen Jones’ faith and her calling.

Her journey actually began decades earlier at age 12 when she realized she had a gift for creating art and began doing portraits. It was in art class where she met her husband, Christopher.

“I was 15 when we started dating,” she said. “We were together 36 years and married for 32.” Together they had five children.

Christopher was Catholic. Jones, who was baptized and raised in a fundamentalist Christian church, was with him at Mass at St. Bavo in Mishawaka in the early 1990s when she heard the priest ask from the pulpit, “Are you looking for a new church home?”

She felt a nudge and contacted Gus Zuelke, the parish’s religious education director.

“The one thing he talked about was the Eucharist becoming God,” she said. “I never understood the point of communion in the fundamentalist church. When I learned the whole truth about the bread and wine actually becoming the body and blood of Christ, something clicked, and it made sense!”

The couple lived most of their married life in northern Indiana, where Jones was a stay-at-home mom. She took portraiture classes her mother-in-law paid for “just so I could get out of the house.” 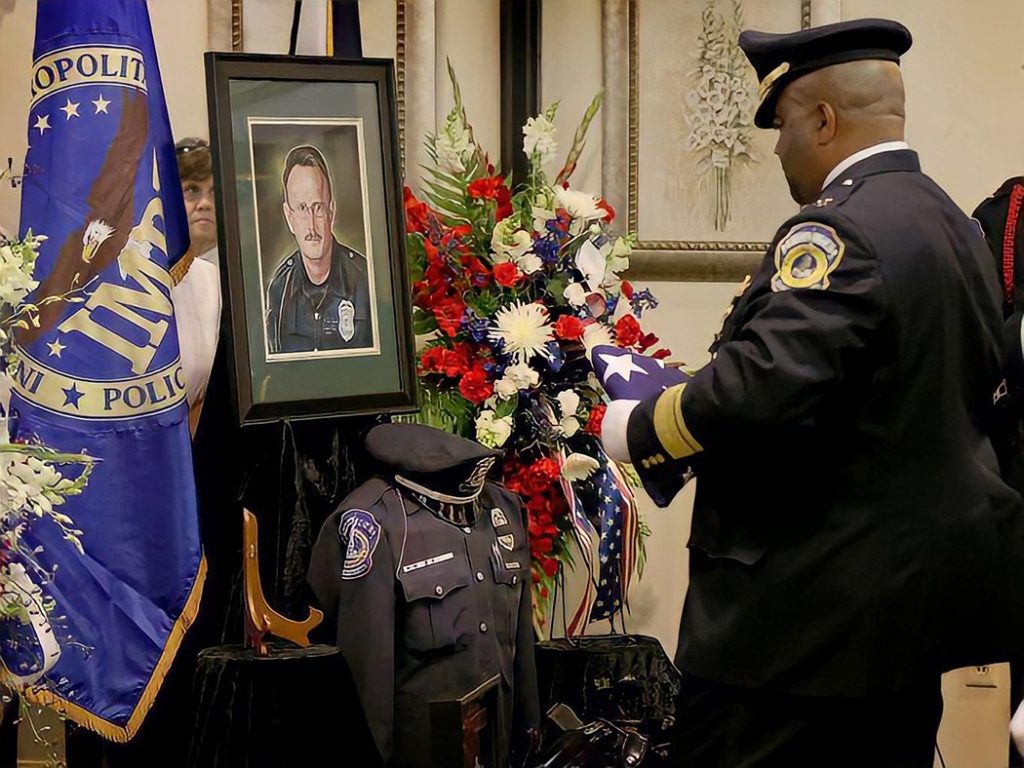 A police officer stands in front of a portrait of officer Perry Renn of the Indianapolis Metropolitan Police Department painted by D. Anne Jones through her nonprofit, Face to Face Fine Art. Officer Renn was shot and killed in the line of duty July 5, 2014. (CNS photo/courtesy Face to Face Fine Art via The Criterion)

In 2002, she started traveling to art and craft shows 46 weekends a year, completing up to 1,000 portraits annually. By 2011, however, Jones was burning out and began considering how she could use her gift in a nonprofit capacity.

That November, her closest sister, Lisa, was diagnosed with a brain tumor. She died four months later, March 17, 2012. Lisa’s death was too great a loss for their mother to handle.

“Mom was a miracle. She had pancreatic cancer for 22 years. Originally, they told her she’d live five years,” Jones said.

“When my sister Lisa died, she was done and just wanted to go. Seven weeks later, my mom died. We buried her the day before Mother’s Day.”

But Jones still found cause for joy. One of her and Christopher’s children would be married just seven days later.

“That morning of the wedding, my husband did not wake up,” Jones said. “He was totally fine the night before. We went to bed, told each other we loved each other, and I found him dead at seven in the morning.”

She leaned heavily on her faith after the loss of three loved ones within eight weeks.

“I don’t know how anyone gets through the loss of anyone major in life without the Lord. It’s like all the people I was closest to were taken. I had no one else to turn to but the Lord,” Jones said.

Through her loss and through prayer, Jones found the cause she was looking for to create a nonprofit. In the process, her own heart healed.

“I really believe that if you are hurt and in pain, if you can do something for somebody else, it helps take your mind off your own pain,” she said.

With her nonprofit Face to Face Fine Art, those who lose a loved one suddenly, unexpectedly or tragically can apply for a free painting of the person. Applications are reviewed and voted upon by the board of directors.

“If there’s funding, they OK as many as they can,” Jones explained, noting that it costs $400 to make a portrait, or $450 if a frame is requested. “If there’s not enough money, then they might approve an application, but it will be a while before the portrait is made.”

Since 2013, Jones has created more than 200 portraits, including some for people overseas.

In addition to seeking healing through her portrait projects, she also published a book that year. Titled “Balm for the Heart: My Journey Through Loss and Bereavement,” it is described on Amazon.com as telling the story of “how God used (Jones’) losses to draw her closer to himself and to enter into a more intimate relationship with him.”

In 2019, tragedy again struck. Jones’ daughter, Leah, died unexpectedly, leaving behind an 11-year-old daughter, Emma. Jones became her legal guardian and moved to Zionsville in February 2020 so Emma could remain in her school.

Then the pandemic struck.

“I was in a new town, isolated, not knowing anyone,” Jones said.

Once again, her faith and her devotion to her nonprofit cause got her through.

“God let me experience all this (suffering) so I can have empathy for other people,” Jones said. “And I want to help.”

Editor’s Note: For more information about Face to Face Fine Art, to donate or to find a link to D. Anne Jones’ book, go to facetofacefineart.org.

Hoefer is a staff writer at The Criterion newspaper of the Archdiocese of Indianapolis.