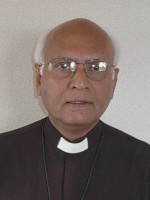 NORTH MANCHESTER — Father Ronald Ramenaden died Wednesday, Sept. 9 at St. Robert Parish, where he was serving as pastor. His body was discovered Sept. 11 when parishioners came for Friday morning Mass. He was 67.

Father Ramenaden was an Oblate priest, ordained in 1970, who came from Sri Lanka to serve as a missionary in the diocese. He was originally stationed at St. Charles Borromeo Parish, Fort Wayne, and has served as pastor at St. Robert Bellarmine Parish, North Manchester, since Oct. 15, 1997. Father Ramenaden was incardinated as a priest of the Diocese of Fort Wayne-South Bend in 1997.
Benedictine Father Bernard Ramenaden, his brother, serves as pastor of St. Gaspar Del Bufalo Parish, Rome City.

Father Ramenaden was a devoted and faith-filled priest says St. Robert’s parishioner Terri Mathias. “He ministered with great care and love and made the parish needs his priority. He was very knowledgeable and loved to share stories of his life before he came to the U.S. He was very spiritual. I’ll always remember that,” she adds.

The St. Robert’s pastor was also known for his generous nature and helpfulness. He was known to stop and speak with the children of St. Robert’s on a regular basis and spoke of his concern for their catechesis. That concern translated to the entire parish as well. Jeanette Dziabis says, “He was very interested in the parish and its needs.”

Father Ramenaden was born in Colombo, Sri Lanka, to the late Nicholas and Irene Babapulle Ramenaden on Aug. 7, 1942. Surviving are his brothers Father Bernard Ramenaden of Rome City, Neville Ramenaden of Colombo, Sri Lanka, one sister, Gladys Wensuslaus Rodrigo of Colombo, Sri Lanka, two nieces and one great-nephew. His brother Maurice Ramenaden preceded him in death.
Services for Father Ramenaden were held Sunday, Sept. 13, at St. Robert Bellarmine Church with  reception of the body and Vigil Service at 5 p.m. Visitation followed the service until 7 p.m. and on Monday morning, Sept. 14, prior to Mass at the church. The funeral Mass was celebrated by Bishop John M. D’Arcy, followed by a luncheon offered by the parish. Burial took place in the priests’ section of the Fort Wayne Catholic Cemetery on Monday afternoon.

Memorial contributions may be made for Masses or the missions in Sri Lanka. Condolences may be sent to www.delaughtermckee.com.