FORT WAYNE – The Central Catholic Alumni Association invites all former students, staff and faculty to the Central Catholic Memorial Plaza on E. Lewis Street in Fort Wayne on June 11 from 11 a.m. to 3 p.m. The year 2022 marks the 50-year anniversary of the school’s closing. To honor Central Catholic and all it meant to those who were a part of it, the alumni association is holding a celebration at the site of the former school, rain or shine.

NOTRE DAME – In “Ave Explores: The Mass,” you will learn about the history and structure of the liturgy, how to combat distractions during the service, ways to be a more active participant in the homily and how the Mass can transform your life. You will learn from experts including theologians Timothy P. O’Malley and Susan Timoney, Deacon Greg Kandra, Shannon Wimp Schmidt, Emily Stimpson Chapman, Paula Huston, Father Michael White and Tom Corcoran. “Ave Explores” is a free, multimedia educational series created to help Catholics consider aspects of our faith from a variety of angles, considering topics that are relevant to our daily spiritual lives in fresh, engaging, and practical ways. You can get a sneak peek of “Ave Explores: The Mass” with a special episode of the Ave Explores podcast on May 4. Host Katie Prejean McGrady will talk with Father Patrick Mary Briscoe, OP, about the transforming power of the Mass. The full series begins on May 11, available through podcast services: Apple Podcasts, Spotify, Google Play Music, Redeemer Radio and Spoke Street Media.

FORT WAYNE – Bishop Kevin C. Rhoades visited the eighth-grade history class at St. John the Baptist School in Fort Wayne on May 11. He was excited to talk with the students about early American Catholicism and the history of the diocese. After answering some questions, he traced the roots of Catholicism in America back to British, French and Spanish evangelical efforts, emphasizing that America was a European missionary territory. He spoke of the significance of the state of Maryland and its foundational religious freedom in the British colonies. From this point, the bishop launched into the growth of the diocese, telling the students about the engaging efforts of Bishop Simon Brute, Fathers Edward Sorin, CSC and Julian Benoit. All of these, Bishop Rhoades explained, were critical in the formation of the diocese. 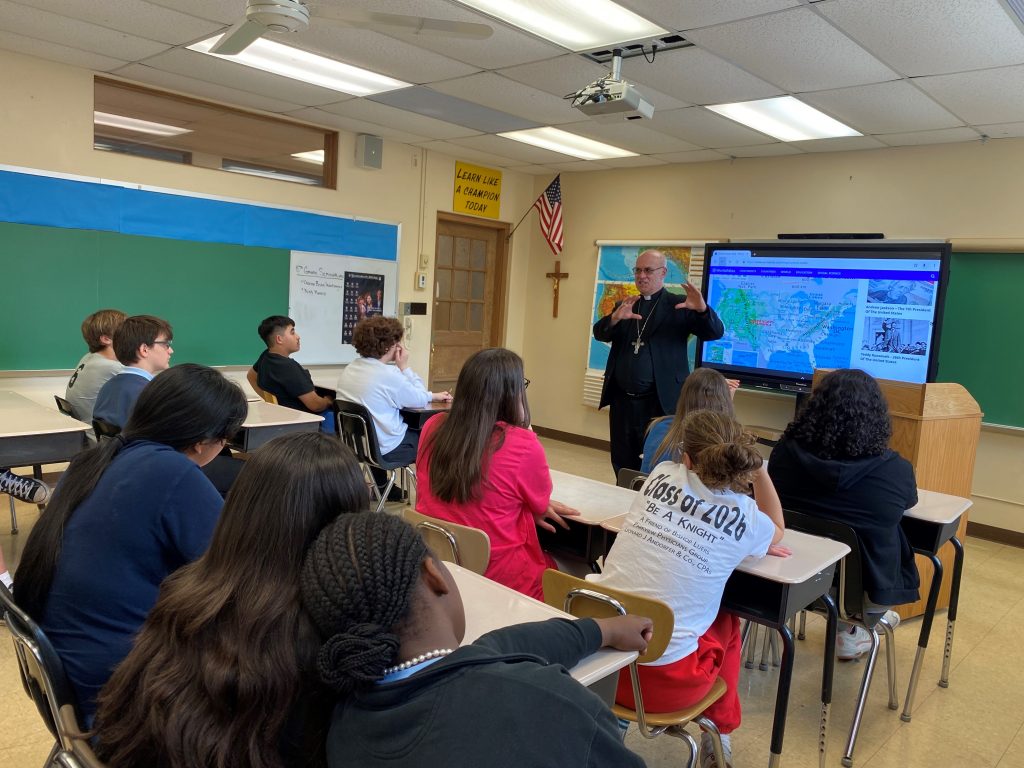 He ended by speaking about his own faith journey, the importance of keeping the faith in high school, whether attending a Catholic or public school, and the compatibility of faith and reason. The class concluded with prayer and Bishop’s blessing as students prepared to receive the sacrament of confirmation the following night.

In the May 15 issue, the article “Co-valedictorians lead Marian class of ’22” misprinted the name of Grace Weaver’s father. Her father’s name is Doctor LeRoy Weaver. We apologize for the error. 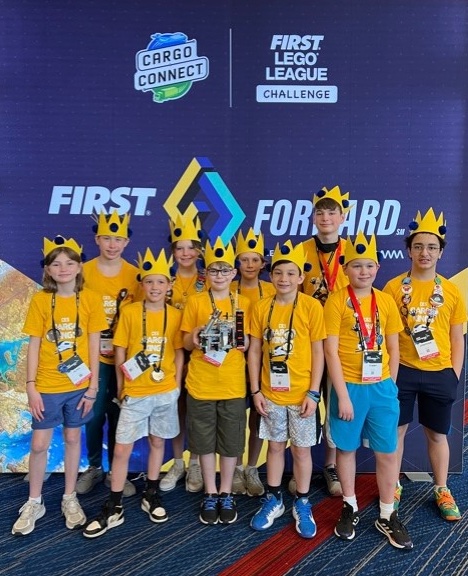 Provided by Edward Zielinski
The Christ the King LEGO Robotics team participated in FIRST LEGO League World Championships in Houston, Texas, as the sole representatives from Indiana. They coded, engineered and designed a robot to navigate missions in the competition. The team placed 36 out of 106. Coach Edward Zielinski says that the team “has been steadily improving over the course of the last few seasons, and this year we had a half-and-half mix of very capable, creative veteran team members plus a group of fifth-grade ‘rookies’ that were eager to learn and brought to the team a ton of energy and enthusiasm. It really worked for us.” 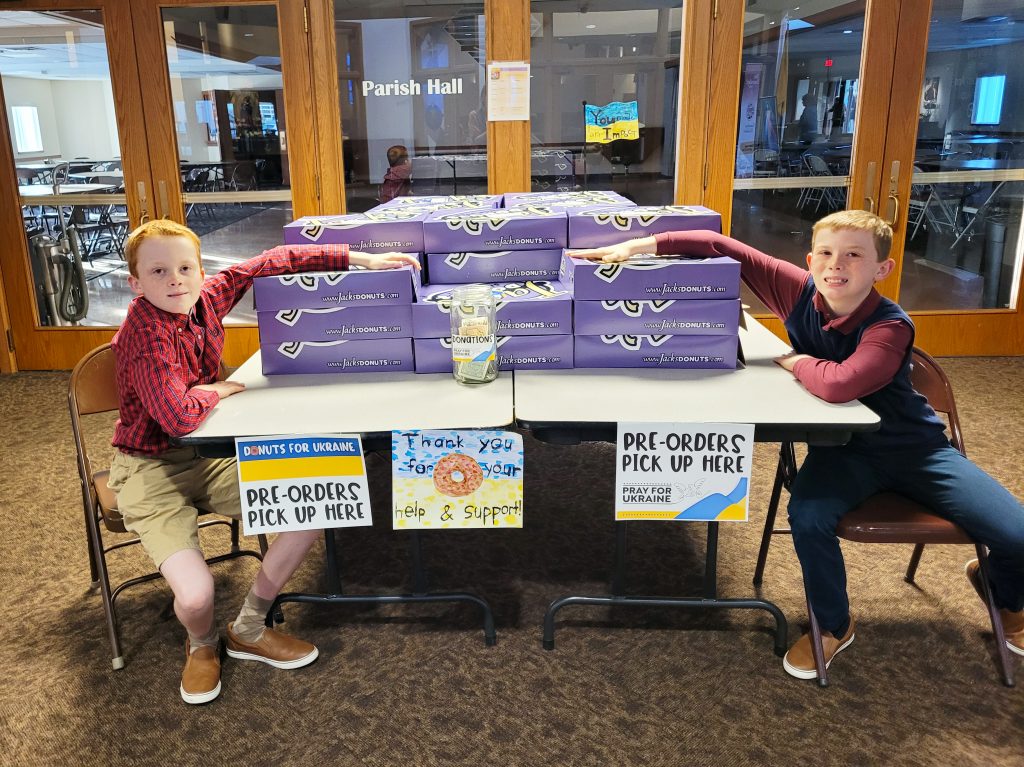 Provided by Courtney Freiburger
War is a difficult thing to talk to children about, and brothers Nicholas and Oliver Freiburger didn’t like feeling helpless knowing that Ukrainians were suffering. Oliver first came up with the idea of selling doughnuts as a fundraiser to raise money for Ukraine. They found the organization Medical Teams International, which provides basic medical care, life-saving care as well as psychological first aid and mental health support in its humanitarian aid for Ukraine. The brothers decided to sell Jack’s Donuts to parishioners at St. Elizabeth Ann Seton in Fort Wayne for MTI. With the loving and generous hearts of their parish and school families and dear friends, Nicholas and Oliver far surpassed their goal, raising $2,531 for MTI’s Ukrainian relief. 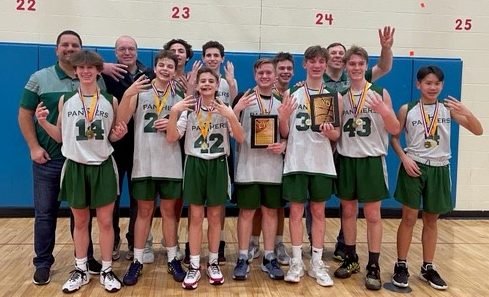 Provided by Molly Schreck
The St. Vincent de Paul, Fort Wayne, eighth-grade boys basketball team clinched the CYO championship title for the fourth year in a row. The Panthers beat the St. Charles Borromeo Cardinals with a final score of 30-27. Each player contributed to the win, and the 3-point buzzer-beater was scored by Eddie Miller.