Zirkle has served as president of Ancilla College for four years. He leaves behind a campus looking much different than it did when he began. During his tenure, two new residence halls were built as well as a student life center. New programs were added including the Autism Program at Ancilla College, an agriculture program and a culinary arts program.

Zirkle said, “I came to Ancilla College with the intent of staying one year but God had other plans. The past four years have been the most enjoyable and challenging of my career. I am impressed with the cooperative spirit and dedication of the staff and faculty to Ancilla’s mission.”

The board of trustees has appointed and affirmed Dr. Michele Dvorak, PHJC as the new president of Ancilla College.

Dvorak has ministered in education since 1976 and has a master’s degree in administration and a doctorate in Catholic education leadership. She has been a teacher and principal in Indiana and Illinois and a professor at Calumet College of St. Joseph in Whiting, Indiana, where she also held the positions of vice president of academic and student affairs and director of the education program. For the past five years, she has served as a member of the Poor Handmaids of Jesus Christ leadership team. Dvorak was serving as the chief operating officer at Ancilla College before her appointment as president. She was born in Minneapolis, Minnesota, and took her first vows as a Poor Handmaid in 1976.

Dvorak expressed, “I am pleased to offer my gifts and talents in collaboration with the leadership and board of Ancilla College. We look forward to a great year!”

Ancilla Board Chair John Chandler noted, “The board of Ancilla College extends its heartfelt gratitude to Dr. Zirkle for his passionate commitment to the mission of education in Donaldson. We are pleased that one of our own alums, Dr. Dvorak, will lead the college and build on a 75-plus-year legacy of service by the Poor Handmaids in higher education.”

Ancilla College, part of The Center at Donaldson, is a liberal arts institution of higher learning sponsored by the Poor Handmaids of Jesus Christ. 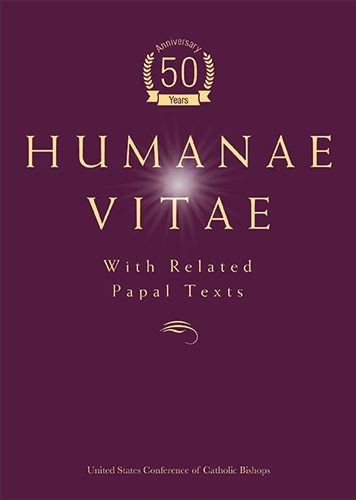 WASHINGTON — In honor of the 50th Anniversary of Blessed Paul VI’s encyclical letter “Humanae Vitae” (“Of Human Life”), the U.S. Conference of Catholic Bishops is making available a special 50th anniversary edition that includes reflections from succeeding popes on the prophetic teaching that honors the spiritual and sensory elements found in conjugal love.

Recognizing the fullness of the marital union as total, faithful and exclusive, the encyclical proclaims the path of grace and true happiness for married couples under the abiding yoke of Christ. Originally published in 1968, Blessed Paul VI’s letter promotes the whole human person in the context of marital love that respects both the spiritual and physical dimensions of man and woman. Considering the human person as a whole, it also presents the practical social implications if the document’s conclusions — based on the full respect of the totality of persons — are ignored.

This 50th anniversary edition includes the full encyclical, with excerpts from Blessed Paul VI’s successors affirming the teachings of Humanae Vitae. Also included are selections from the 1968 U.S. Catholic bishops’ statement, “Human Life in Our Day.”

The 50th anniversary edition of “Humanae Vitae” can be ordered online at  store.usccb.org/humanae-vitae-50th-anniversary-edition-p/7-596.htm.

Additional books and resources pertaining to marriage and family life, the Catechism of the Catholic Church, the Vatican, ministry and more can be found by visiting the USCCB’s online bookstore at https://store.usccb.org/.

SOUTH BEND — The University of Notre Dame Women’s Liturgical Choir has formed a mutually beneficial partnership with Our Lady of the Road in South Bend, a drop-in homeless meal and hospitality located at 744 S Main St.

Several choir members volunteer their time at Our Lady of the Road throughout the semester.

At 8 p.m. on May 16, the entire choir, led by Dr. Patrick Kronner, organist and choral program director, will provide the liturgical music for a Mass that will be celebrated in the chapel at that location.

On May 18, as a way for choir members to work toward something greater for their end-of-the-year performance, they will also present a benefit concert for Our Lady of the Road in the Basilica of the Sacred Heart on the University of Notre Dame Campus.

All are invited to attend, enjoy the talents of the Notre Dame Women’s Liturgical Choir and support Our Lady of the Road’s programs for the homeless in South Bend.

Every year the Father Solanus Casey Vocation Society presents awards to two senior students at each of the Fort Wayne Catholic high schools, Bishop Dwenger and Bishop Luers. The students who are honored are chosen because of their demonstrated devotion to promoting their Catholic faith in the high school setting. From Bishop Luers High School, students Emma Ward and Ashton Everett were chosen. From Bishop Dwenger High School, students Megan Shanebrook and Colin Stroud were chosen.