FRANKFORT, Ill. — Three Franciscan Sisters of the Sacred Heart who are serving or have served in the Diocese of Fort Wayne-South Bend are observing jubilees this year.

Sister Genevieve Raupp, OSF, is celebrating her 50th year as a religious. She was born in Lake Zurich, Illinois, and professed her first vows in 1974 as a Franciscan Sister of the Sacred Heart, whose motherhouse is in Frankfort. Sister Genevieve had a long career as a teacher and principal.

Sister Kathleen Anne Copp, OSF, has also been a Franciscan Sister of the Sacred Heart for 50 years. She born in Ferndale, Michigan, and professed her first vows in 1974. In the Diocese of Fort Wayne-South Bend she ministered as a teacher at St. Charles Borromeo School from 1980-85 and as assistant principal from 1985-87. From 1987-90 she taught at Bishop Luers High School in Fort Wayne, following which she engaged in retreat ministry at the Portiuncula Center for Prayer in Frankfort from 1990-2000. Sister Kathleen then ministered in Brazil from 2006-08. Through the years she also served in various roles as a formation minister in the congregation.

Sister Elaine Teders, OSF, observes her 60th jubilee in 2021. Originally from Garrett, she professed her first vows in 1964 as a Franciscan Sister of the Sacred Heart.

Sister Elaine has had a long career as a teacher and principal. In the Diocese of Fort Wayne-South Bend, she served as principal at St. Joseph School in Garrett from 1983-85 and as principal at St. Charles Borromeo School from 1985-89. In addition to ministering as an educator, she was a member of the Congregation’s Leadership Team from 1989-99. She also served the congregation as the general secretary from 1994-2009. In addition, she was the administrator at the Portiuncula Center for Prayer in Frankfort from 1999-2008. Presently, she works in the congregation’s accounts payable department. 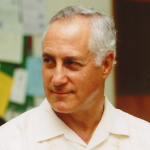 His preparation for the missionary vocation were completed in Monroe, Michigan, the University of San Diego and Gregorian University in Rome.

On July 31, 1971, Father Converset was ordained a Comboni Missionary priest. His first assignment was to South Africa, where he learned the Northern Sotho language. He eventually became pastor of Waterval Parish near the border with Mozambique.

After 11 years, Father Converset returned to the North American Province of the Comboni Missionaries to assist with vocations and formation. He also served in leadership roles several times over the next 15 years. One of his main accomplishments was establishing an office for Justice, Peace and Integrity of Creation within the province.

In 1999 Father Converset once again returned to South Africa, this time near Pretoria. He spent the next 10 years in South Africa helping with vocations, formation, and justice and peace work.

Father Converset returned to the United States in 2010. Over the past 11 years he has served all over the North American Province. For many years he served at St. Cecilia Parish in Los Angeles. He now resides at the Comboni Mission Center, formerly Sacred Heart Seminary. He assists with various local ministries to nursing homes, parishes and schools.

FORT WAYNE — Richard G. Beemer is compiling and editing a book on Blessed Father Solanus Casey, OFM Cap., who lived at St. Felix Friary in Huntington from 1946 to 1956. He is in search of personal encounters, memories, reflections and especially favors attributed to his intercession during his 10 years at St. Felix.

The author requests that contributors send a high-resolution photo of themselves as well as provide, in writing, their phone number, email address, and permission to edit and publish their stories and photos. Mail to Father Solanus Casey, P.O. Box 701, Huntington, IN 46750, or email them to [email protected]

Profits from the book will be donated to The Open Door, a 23-year-old nonprofit organization sponsored by St. Mary and SS. Peter and Paul parishes in Huntington, whose volunteers cook and deliver homemade soup, side dish and a dessert to more than 250 people in Huntington County.

Beemer, an editor and writer at Our Sunday Visitor Publishing for 31 years, now works from his home as the remote online managing editor of Angelus magazine, the official publication for the Archdiocese of Los Angeles, and he is a lifelong resident of Huntington and a parishioner at SS. Peter and Paul. He is also a book proofreader for the Catholic book publisher Catholic Answers and is on the board of the Huntington County Historical Society.