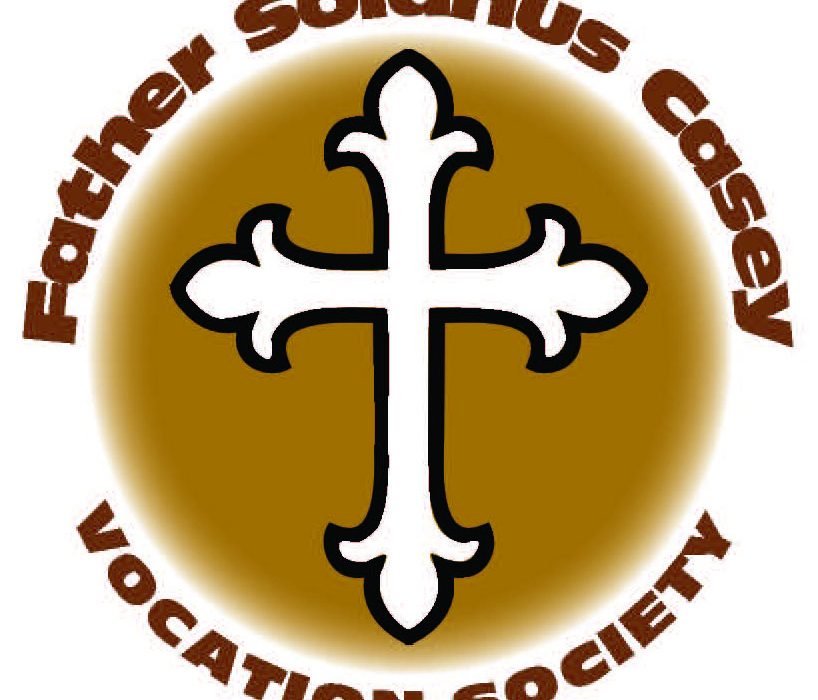 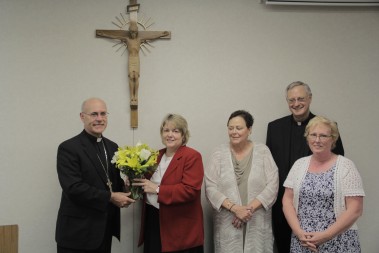 Maureen Schott retires after 20 years of service to diocese.
Bishop Kevin C. Rhoades bids farewell to longtime secretary Maureen Schott as she retires from over 20 years of work for the Diocese of Fort Wayne-South Bend. She started her career at Today’s Catholic, working in the Communications Office and finally as secretary to the late Bishop John M. D’Arcy and Bishop Kevin C. Rhoades. From left are, Bishop Rhoades, Marueen Schott, Mari Raatz, Msgr. Robert Schulte and Deb Lewandowski.

Henry Kiracofe, a sixth-grade student was also selected as one of four students chosen from 20,000 nationwide as a 2016 National ACE Student of the Year. In addition, instructor MSgt. Tony Vining was named the 2016 National Educator of the Year.

FORT WAYNE — Fort Wayne’s Voices of Unity choir will embark on a four-country “Journey to the Vatican” tour this summer. The choir will provide music for the Mass in St. Peter’s Basilica at the Vatican on July 3.

“This is one of the most incredible honors to date for us,” said Marshall White, founder and CEO of the Unity Performing Arts Foundation and director of the Voices of Unity choir.

The choir is expected to showcase five pieces in its soulful style that has won numerous awards around the country and worldwide. Several gospel-style spirituals will be performed in English, with the piece “Total Praise” set to be sung in Italian during the concluding rites.

The Vatican is just one stop in a series of visits from June 29 to July 13. Voices of Unity will also compete in the Roma International Choir Festival and Competition.

“This is a remarkable event that helps so many women, and we are thankful to be in a community that has supported and embraced our mission. With our newest center opening its doors at 4600 West Jefferson Blvd., we can now serve even more families,” remarked Anne Koehl, director.

To learn more about the Women’s Care Center or to see how you can get involved next year, contact Claire Freddoso at 574-360-0015 or visit www.womenscarecenter.org. 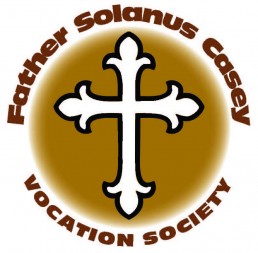 FORT WAYNE — The Serra Club of Fort Wayne, an organization of Catholic lay men and women dedicated to praying for and supporting vocations to the diocesan priesthood and religious life, has announced that they will now be known as the Father Solanus Casey Vocation Society. This follows a decision by the members of the local Fort Wayne club to dissolve its affiliation with the national club, the Serra Council of the United States, and the umbrella organization, Serra International.

This decision will allow the group to focus its resources on local activities that foster and support vocations to the priesthood and religious life.

Father Solanus Casey Vocation Society President Dan Kelker said that the name change will help clarify the purpose of the organization. The Serra Club has long been confused with an environmental organization with a similar sounding name.

The reorganized Vocation Society was named in honor of Venerable Solanus Casey and invokes his prayers for several reasons. He was a Capuchin Franciscan whose heroic virtue has been recognized by the Church. Father Solanus lived at the St. Felix Friary in Huntington from 1946-1956.

1. Holding an annual appreciation dinner for the religious sisters in the Fort Wayne area.

2. Holding a bi-annual banquet for seminarians and their families. (Sponsored by the South Bend Serra Club on alternate years.)

3. Sponsorship of the Christian Leadership Awards for a young man and woman from each Bishop Luers and Bishop Dwenger High Schools.

5. Sponsorship of the Bishop’s Trophy for the winner of the annual football game between Bishop Luers and Bishop Dwenger High Schools.

6. First Friday Mass at 11:30 a.m. at St. Joseph’s Hospital followed by lunch with a speaker on a topic related to vocations.

President Dan Kelker also said the society hopes to expand its activities over the next year.  These include financial support for certain vocation programs that Father Andrew Budzinski, Diocesan Vocation Director, would like to implement, and support for seminarians from the Franciscan Brothers Minor.  He would also like to invite anyone interested in joining the society, including former Serra Club members, to contact him at 260-456-9519 or membership chairman Dave Steffen at 260-745-9711.

NOTRE DAME — Best selling author Jesuit Father James Martin will talk about Encountering Jesus on Saturday July 9, at 9 a.m. at Holy Cross College at the Driscoll Auditorium. Father Martin is a Jesuit priest editor of America magazine and bestselling author of many books including Jesus: A Pilgrimage, The Guide to Almost Everything. Father Martin has written for many publications, and he is a regular commentator in the national and international media. He has appeared on major radio and televisions networks, as well as in venues ranging for NPR’s NewsHour to Comedy Central’s The Colbert Report. He was a major commentator for the Pope’s visit to the U.S. Before entering the Jesuits in 1988 Father Martin graduated from the Wharton School of Business and worked for General Electric for six years.

The keynote address “Walking with Christ to Wake Up the World” will be Saturday, July 9, from 9 a.m. to noon ending with a question and answer session.  This special talk is free and open to the public and part of a larger conference for the Holy Cross Associates with members from across the country. 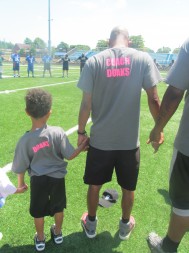 Coach Trevor Doaks and his son, Jackson, join hands in praying for the end to violence before the 8th annual St. Augustine Father/Son Football Game at Father Walter Bly Field on the campus of Saint Joseph High School. — Jennifer Miller
Visit the photo gallery for more photos from this event.