FRANKFORT, Ill. — The Franciscan Sisters of the Sacred Heart, Frankfort, Illinois, celebrated the jubilees of their sisters on June 8. One of the jubilarians ministered in the Diocese of Fort Wayne-South Bend.

Sister Coletta Hennessy, OSF, celebrated her 70th jubilee. She was born in Cleveland, Ohio: In the Diocese of Fort Wayne-South Bend she taught at St. Joseph School, Garrett, 1954-59 and 1985-90; at Immaculate Conception School in Auburn, 1963-65; and at St. Charles School, Fort Wayne, 1983-85. Sister Coletta is retired and currently resides in Frankfort. 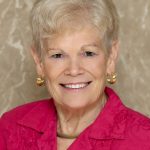 SINSINAWA, Wis. — Sister Colleen Settles, OP, will celebrate her 50th jubilee in July. A Mass will be said in Queen of the Rosary Chapel at Sinsinawa Mound on Sunday, July 14, for her and seven other Sinsinawa Dominican Sisters celebrating 50 years.

Sister Colleen’s home parish is St. Monica, Kalamazoo, Michigan, in the Diocese of Kalamazoo. She is the daughter of the late Gerald Settles and the late Regina (Bordenet) Settles Subler. Her ministry has been dedicated to education, spiritual care and hospital administration.

In the Diocese of Madison, Sister Colleen taught and served as religious education director at Blessed Sacrament School and Parish, 1972-79. She has ministered as a member of the leadership council for the Sinsinawa Dominican Sisters since 2016.

She ministered in the Archdiocese of Los Angeles in mission leadership at Providence Health and Services in Mission Hills, Burbank and Santa Monica, 1990-2016. She has also ministered in Minnesota.

To honor Sister Colleen on her jubilee, go to the Sinsinawa Dominican Sisters’ website, www.sinsinawa.org/jubilee.

HUNTINGTON — SS. Peter and Paul Parish, 860 Cherry St., Huntington, will conclude a yearlong celebration of its 175th anniversary with several events later this month, including a Celebration Concert on Sunday, June 23, that will offer not only an afternoon of music but also a chance to see the newly redecorated interior of the church.

The concert begins at 2 p.m. and will feature the Van Dinter tracker pipe organ, a grand piano recently donated by a parishioner, the church choir, vocal ensembles and soloists, and accompaniment by flute, trumpet and violin.

The European-style organ was built at the church in 1894 by Louis H. Van Dinter, a native of the Netherlands who learned the trade from his father and set up shop first in Detroit and then in Mishawaka, after coming to America in 1871. He and his sons built organs throughout the Midwest, and the instrument at SS. Peter and Paul — which is regularly maintained and in frequent use — is one of the few that remain playable today.

The concert is free and open to the public. Guests also will be able to view the three original altars with elaborate ornamentation that recalls their “original beauty and luster,” said Father Tony Steinacker.

A new altar will be consecrated during the church’s 175th anniversary Mass on Saturday, June 29, at 10 a.m. with Bishop Kevin C. Rhoades as the celebrant. The day will conclude with a dinner and reception, for which tickets are required. Contact the parish at  260-356-4798.

MISHAWAKA — His Catholic faith and a love and talent for music have intertwined for Mishawaka High School valedictorian Joseph Furfaro, who graduated June 9.

“Beyond all the common things that my faith has helped me with, it has enhanced my musical pursuits,” he said. “Music is a very special thing, and it really allows us to come closer to God. Music has always helped me remain faithful through challenging times, and in a similar way my faith has helped encourage me to pursue music at the level that I have gained. Playing instruments and singing in church has helped me to both grow my musical skills and talent and grow in my faith by offering my God-given talents back to the Lord.”

His treasured high school memories are performing solos at the band and jazz band concerts. “It’s simply thrilling,” he said.

At his parish, St. Joseph, Furfaro has been a cantor and an instrumentalist, playing saxophone, for four years.

In his free time during his high school career, Furfaro attained the rank of Eagle Scout in Boy Scout Troop No. 105. His assignments and achievements included senior patrol leader, one year; quartermaster, one year; junior and assistant scoutmaster, two years. He enjoys spending time with friends, staying physically active through sports and working out, and staying active in his faith.

Furfaro intends to pursue a career in music by attending Indiana University in the fall.

James Faroh has retired this summer after serving as principal of Sacred Heart School, Warsaw, for 10 years and in the education field for 45 years. A celebration took place at the school May 23, and was attended by more than 300 people. Student Council members and staff recited some of their favorite memories, wished him well, sang songs and prayed for Faroh, who also received a wall hanging of his ties and his business cards from over the past 45 years and a “Principal Mascot Award,” based on a program he developed to recognize positive behavior of adults or students. — Provided by Winona Drake 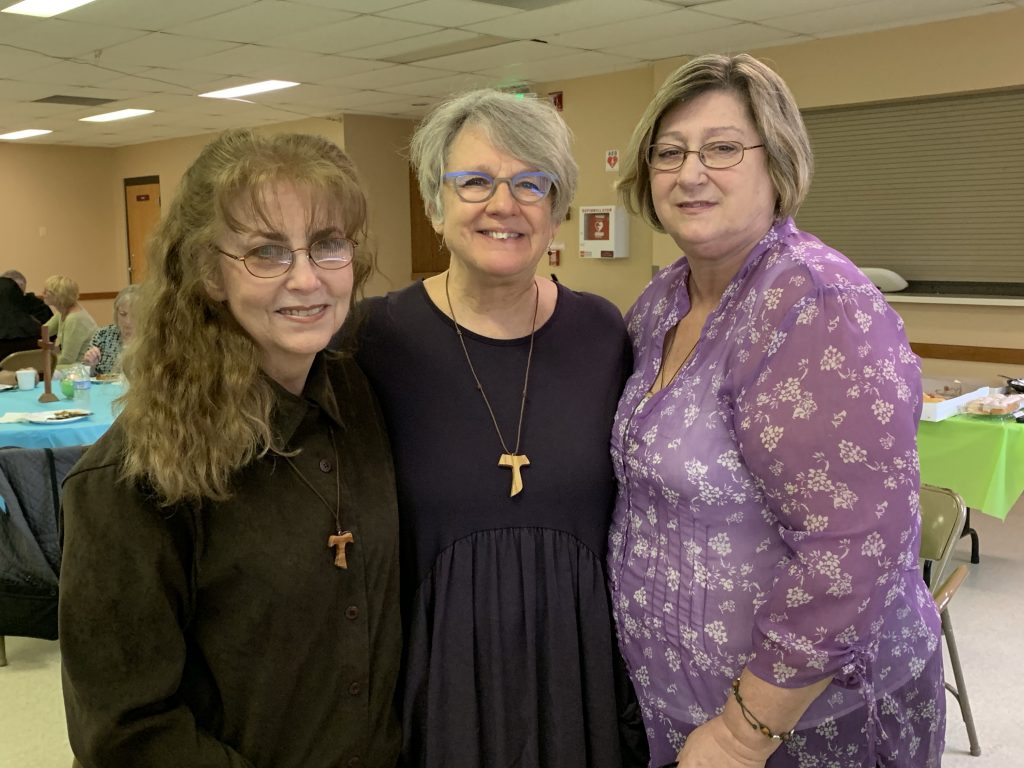 On May 19, three women made their permanent profession in the St. Charles fraternity of the Secular Franciscan Order. Their professions were received by Katie Herendeen, OFS, minister of the St. Charles fraternity, during the 10 a.m. Mass at St. Anthony of Padua Church in Angola. Father Bob Showers, OFM Conventual, celebrated the Mass and was the ecclesial witness. From left are Su Hohman, OFS; Deb Davis, OFS; and Barb Cain, OFS. — Provided by Barbara Braley 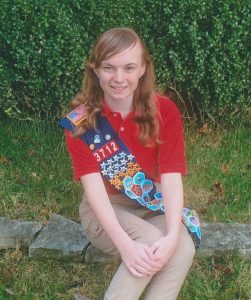 FORT WAYNE – This spring, American Heritage Girls presented Natalie Guisinger, 18, of Huntertown, with the highest recognition available to its girl members: the Stars & Stripes Award. She is the 30th young lady given this honor in Indiana and the first in her local troop, St. Vincent AHG IN3712.

For her project, Guisinger chose a prayer garden on the grounds of the St. Vincent Scout Lodge. It took about a year to complete and consisted of planning, designing, raising funds and installing the garden with the assistance of other youth in her local troop at St. Vincent de Paul Parish in Fort Wayne — with Guisinger as the leader.

Guisinger is a founding member of the troop. During her membership, since 2012, she has served as flag ceremony coordinator and Junior Troop shepherd. She received three previous level awards: the Lewis and Clark Award, Harriet Tubman Award and the Dolly Madison Award. 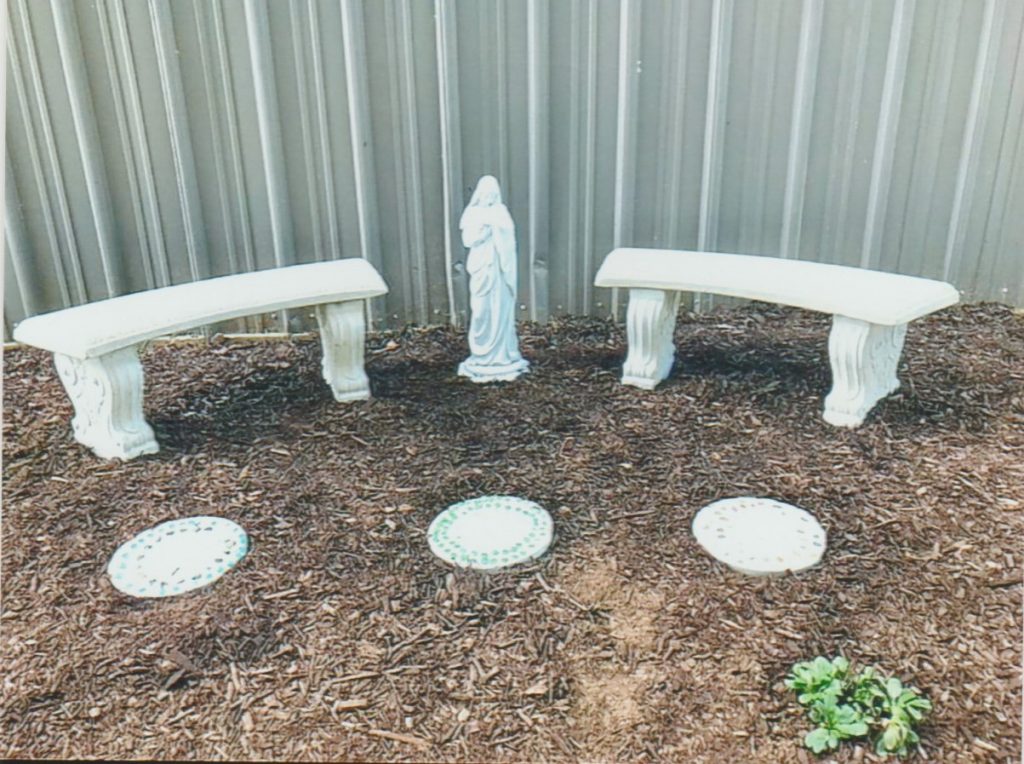 In addition to living out the AHG creed and oath, Stars & Stripes Award recipients complete a number of requirements to achieve this honor including: earning a total of 16 merit badges and the Religious Medal; holding a leadership position in the troop for a minimum of six months; planning, developing, and providing leadership to other youth in a 100+ hour service project; writing a spiritual walk essay; receiving at least three letters of reference; and passing a board of review.

Guisinger is a senior at Bishop Dwenger High School, where she has been active in the Rosary Club and Science Olympiad. She participates in the Ventures Crew and National Youth Leadership Training with Boy Scouts of America. She was also a recipient of the Presidential Service Award and the Pope Pius Religious Award in 2016.

Guisinger is the daughter of Allen and Mary Ellen Guisinger. She has two brothers, Stephen and Thomas.

She is the 472nd recipient nationally to earn the prestigious Stars & Stripes Award in AHG’s 23-year history. A Court of Honor celebration dinner was held at St. Vincent Life Center April 25. After graduation, she plans on studying elementary education in college.