FORT WAYNE — David LaMaster of Boy Scout Troop 451 at St. Jude Parish, Fort Wayne, conducted his Eagle Scout Court of Honor on Jan. 19. The rank of Eagle Scout is the highest rank in the Boy Scouts of America organization. 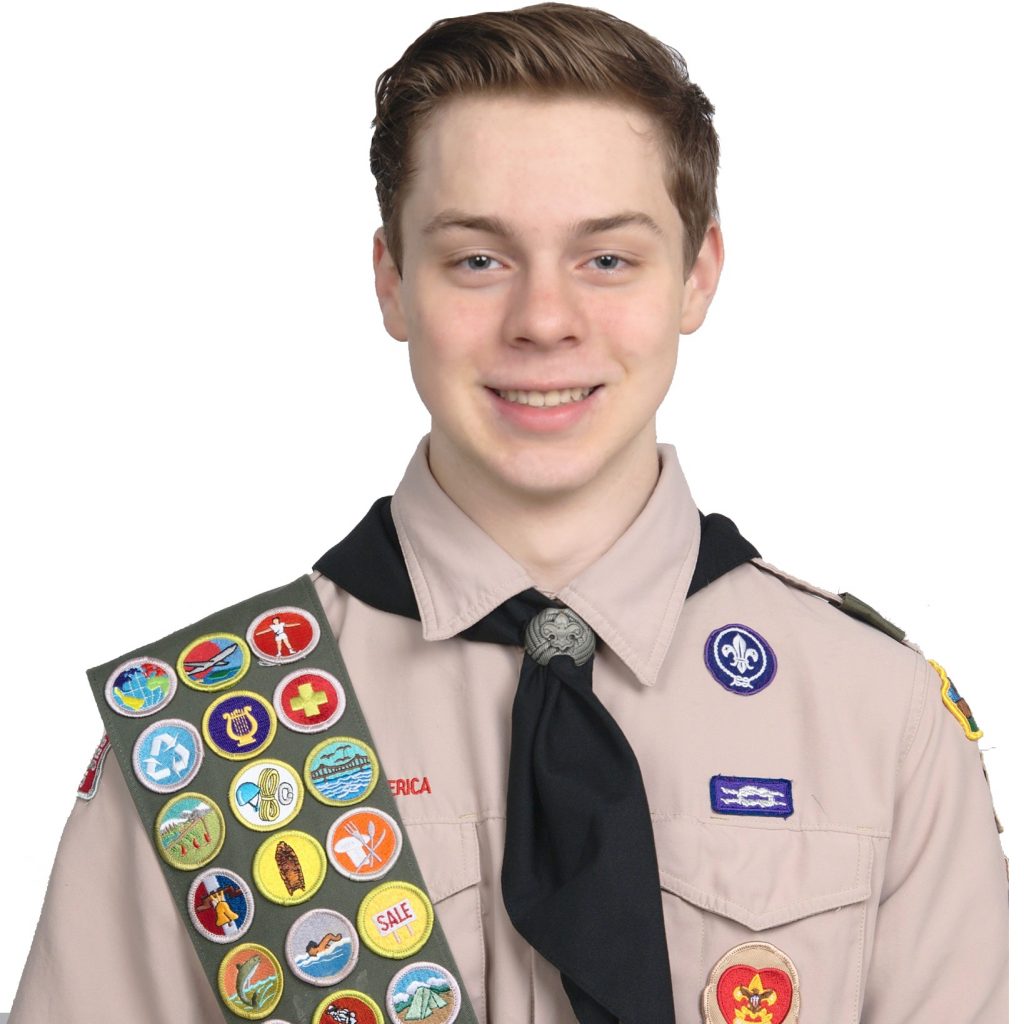 As part of earning the Eagle Scout rank, a Scout must demonstrate leadership in completing a service project. LaMaster turned to the Fort Wayne Parks and Recreation Department to make a positive impact on the Franke Park Day Camp program. He led Scouts, family and friends in clearing an overgrown trail around Frog Pond and refurbishing the camp’s flagpole. Franke Park holds cherished memories for LaMaster because his mother, Laura, spent her youth there as a day camp counselor.

As a Cub Scout, David earned the Parvuli Dei religious emblem and the highest rank in Cub Scouts, the Arrow of Light. After crossing over to Boy Scouts, he earned 28 merit badges and several Scouting awards, and participated in multiple service projects. Scouting instilled in him a love of the local community, he said. When he was 13, his troop visited Mayor Tom Henry’s office to learn how to be a good citizen. Five years later, he is an active member of the Mayor’s Youth Engagement Council.

During the Eagle Court of Honor ceremony, David expressed gratitude to all who supported him throughout his Scouting journey. He shared how the Scouting program has helped him set a long-term goal and persevere to accomplish it. Msgr. Robert Schulte, pastor of St. Jude and an Eagle Scout himself, congratulated David for earning the honor. 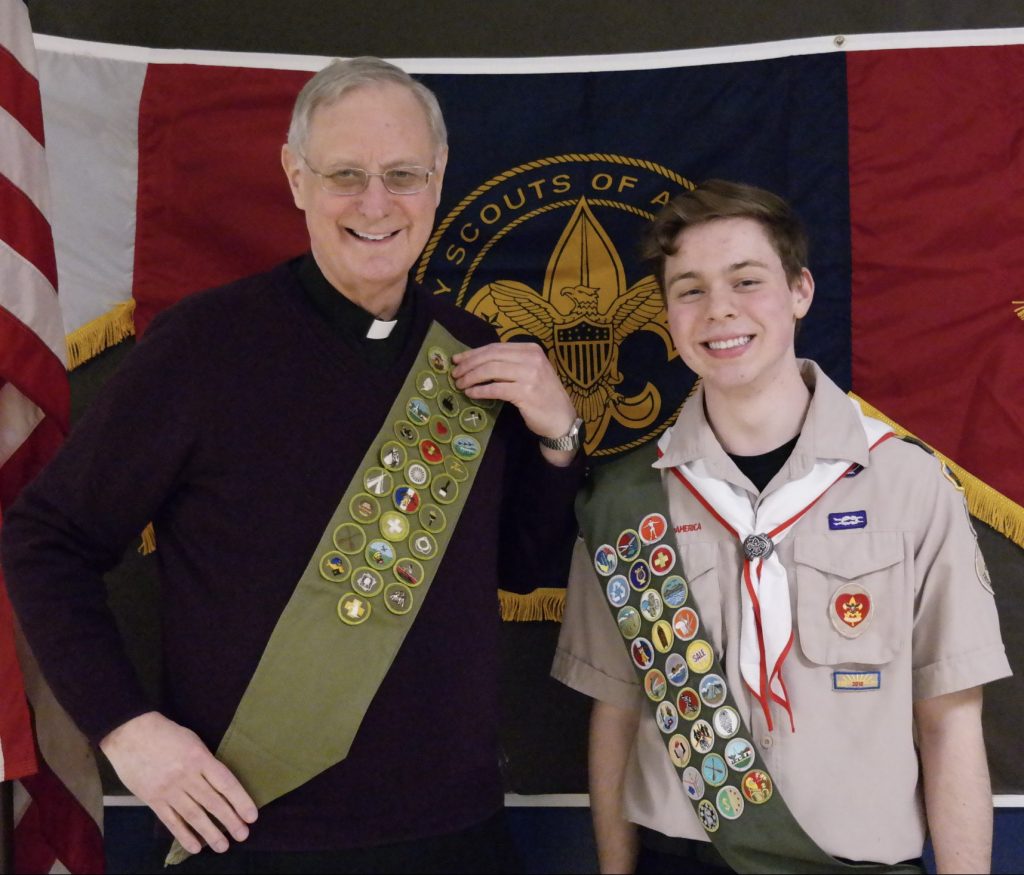 NOTRE DAME — Thomas Grady, chief executive officer and publisher of Ave Maria Press, has been honored with the Association of Catholic Publishers 2020 Hall of Fame Award for his contributions to Catholic publishing.

Grady joined Ave Maria in 2005. Prior to that, he ran his own literary agency and served as publisher, editorial director and editor at HarperSanFrancisco (now HarperOne) from 1986 to 1997. He also was an editor at both Winston-Seabury Press and Meadowbrook Press.

In addition to his duties as publisher and CEO, Grady also took on the role of editorial director for the past few years. During that time, the publishing team increased the number of titles released from 30 to 40 annually.

Perhaps Grady’s most important contribution to Catholic publishing as a whole is his commitment to the development of authors whose works have since been recognized as trailblazing for the Catholic Church, including Rev. Michael White and Tom Corcoran, Lisa M. Hendey, Brandon Vogt, Brian Doyle, Joyce Rupp and Paula Huston.

Grady plans to retire from Ave Maria in the fall.

NOTRE DAME — The board of trustees at Saint Mary’s College has announced that Dr. Katie Conboy has been selected as the 14th president of the 176-year-old Catholic women’s liberal arts college.

The announcement was made at a ceremony in Spes Unica Hall on the college campus Feb. 12, in front of a gathering of students, faculty, staff, trustees, Sisters of the Holy Cross and invited guests. Hundreds of alumnae and study abroad students also watched the event via livestream. Conboy succeeds Dr. Nancy Nekvasil, who has served as interim president since 2018.

Conboy is provost and senior vice president at Simmons University, a women’s college in Boston, a position she’s held since 2013. Prior to Simmons, she was at Stonehill College, a Holy Cross institution in North Easton, Massachusetts, where she served first as a professor of English literature and then as provost. Conboy earned her Ph.D. in English literature from the University of Notre Dame in 1986, and her undergraduate degree at the University of Kansas in 1981.

Conboy expressed her enthusiasm to join the campus community. As the future president of Saint Mary’s, she will carry on the mission of providing undergraduate women with a strong, liberal arts education and the opportunity to advance their education in a growing number of coeducational graduate programs as well. The college currently has a total enrollment of over 1,500 students and an employee base of 538 faculty, administrators and staff.

Conboy will begin her role as president on June 1. 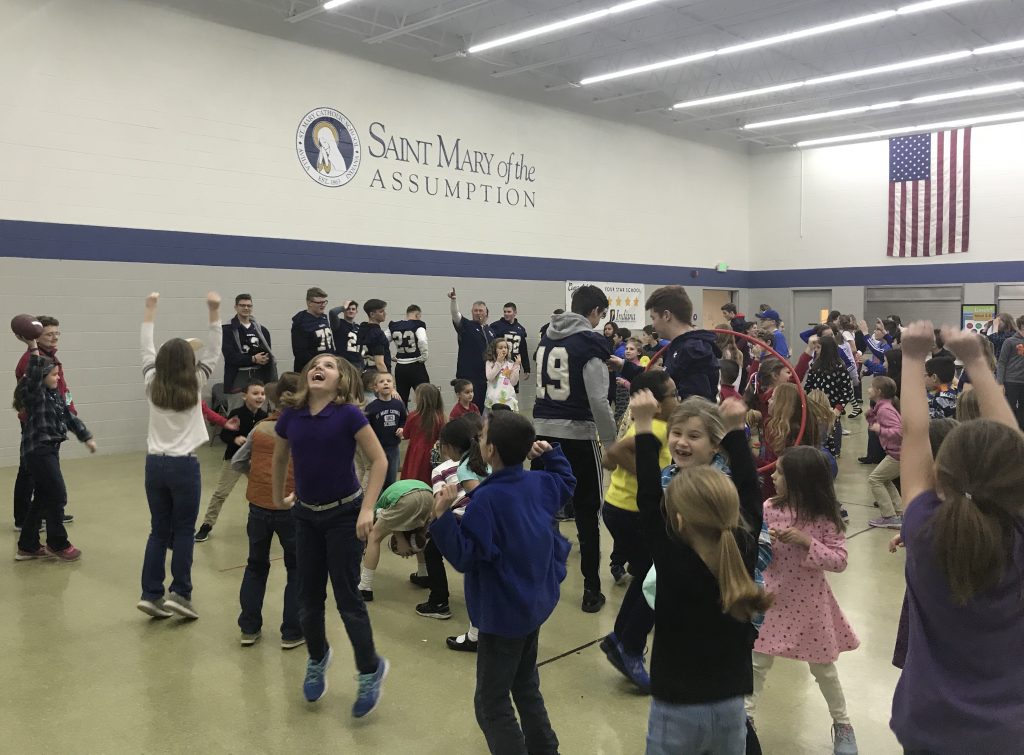 Provided by Heather Taub
Jason Garrett, football coach at Bishop Dwenger High School, Fort Wayne, visited St. Mary of the Assumption School, Avilla, to talk about teamwork, commitment, hard work and dedication. He encouraged the students to give all the glory to God in what they do, whether in the classroom or during extracurricular activities. Several senior members of the Bishop Dwenger football team accompanied coach Garrett and helped the St. Mary team practice the virtues. 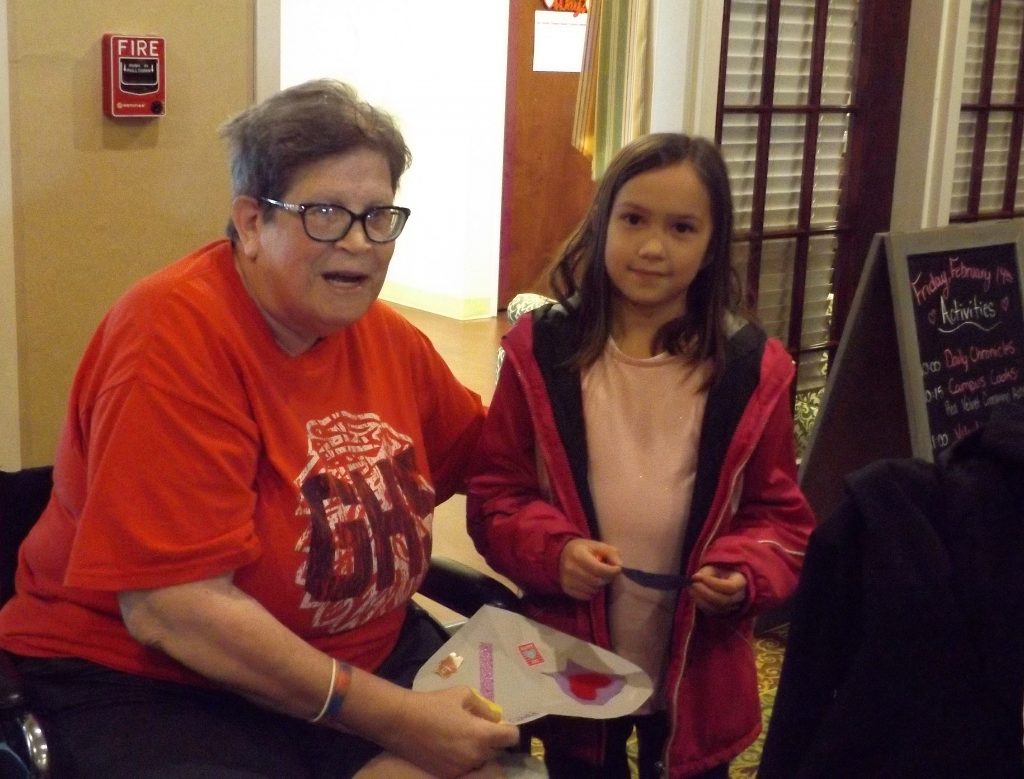 Denise Fedorow
Audrey Wallach of St. John the Evangelist School, Goshen, gives a handmade Valentine to Sue Kirkpatrick, a resident at Waterford Crossing Health Center in Goshen. Audrey and her siblings, along with several other families from St. John, visited the nursing home on Valentine’s Day to hand out the cards and carnations. The event was organized by the St. John’s Moms group, which, along with offering support to one another, strive to teach their children to live out their Catholic faith in the community.