AUBURN — Today, over 8.5 million youth lack supportive, sustained relationships with caring adults. Individuals in the Diocese of Fort Wayne-South Bend can change that by becoming a mentor with Catholic Charities.

This National Mentoring Program was created by the Office of Juvenile Justice and Catholic Charities USA in a response to increasing school attendance and preventing truancy in at-risk youth. Working with ages 9-17, Catholic Charities is looking for mentors who can commit to one year with the program.

Learn more about how to make an impact in a local child’s life by attending an open house Tuesday, April 23, 4-6 p.m. at Immaculate Conception Church, 500 E. Seventh St., Auburn.

MISHAWAKA — “What are you discussing as you go on your way?” The question Christ put to the two disciples on the road to Emmaus is the same question He puts to married couples today. Life gets busy, and it is easy to settle for relating to God and each other in a superficial way. Couples who would like to deepen their relationship with each other and with Christ, may consider attending this annual diocesan retreat given by Deacon Fred and Lisa Everett April 27 and 28 at Lindenwood Retreat and Conference Center, Plymouth.

The Everetts have been married for over 30 years and have worked together in marriage and family ministry for more than three decades. During the retreat, they will help couples look at where they have been, where they are now and where God is leading them. Cost is $195 per couple and includes overnight accommodations and all meals.
For more information and to register, visit www.diocesefwsb.org/MarriageandFamily. For questions, contact Lisa Everett at 574-234-0687 or [email protected].

MISHAWAKA — Students of the Fine Arts Department at Marian High School in Mishawaka earned a grand total of 113 awards in the prestigious Scholastic Art Competition in January.  Under the direction of Kitty Gunty and Gina Bonewitz, the students won 22 Gold Keys, 28 Silver Keys and 63 Honorable Mentions. The Gold Key winners will go on to compete at the national level.

At an awards ceremony Feb. 3 at the Century Center in South Bend, more awards were announced. Apisara Sunantra won an American Voice Award and a $100 stipend for her print titled “Throw Back ‘90s.” Kelly Skwarcan won the Northern Indiana Pastel Society Award and a $100 stipend for her drawing titled “Into the Woods.” Rue Desmarais was recognized with a Silver Key for his portfolio and was given a $1,000 scholarship, and Noah Majewski, a freshman, won a Gold Key at regionals and a Silver Award at the national level for his photograph titled “My Fast Childhood.”  Majewski was invited to pick up his winning medal at Carnegie Hall in New York City.

Bonewitz was recognized for excellence in teaching and Gunty won the Ann Hamilton Award for Inspired Teaching.

All of the award-winning artwork was on display for public viewing during March at the Warner and Community Galleries of the South Bend Museum of Art in the Century Center. 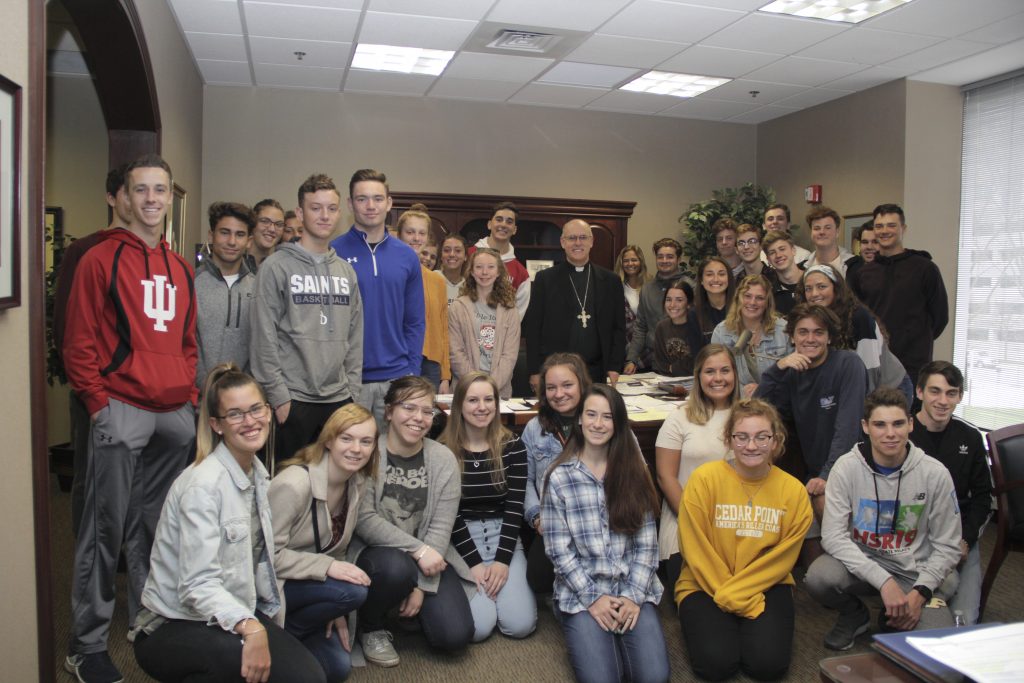 Students from Bishop Dwenger High School, Fort Wayne, who are learning about vocations toured the Fort Wayne offices of the Curia in the Archbishop Noll Catholic Center, downtown, Wednesday, April 10. The students and their teacher, Tom Kinney, and chaperones were guided throughout their visit by Bishop Kevin C. Rhoades and enjoyed an opportunity to eat lunch with him. — Jodi Marlin 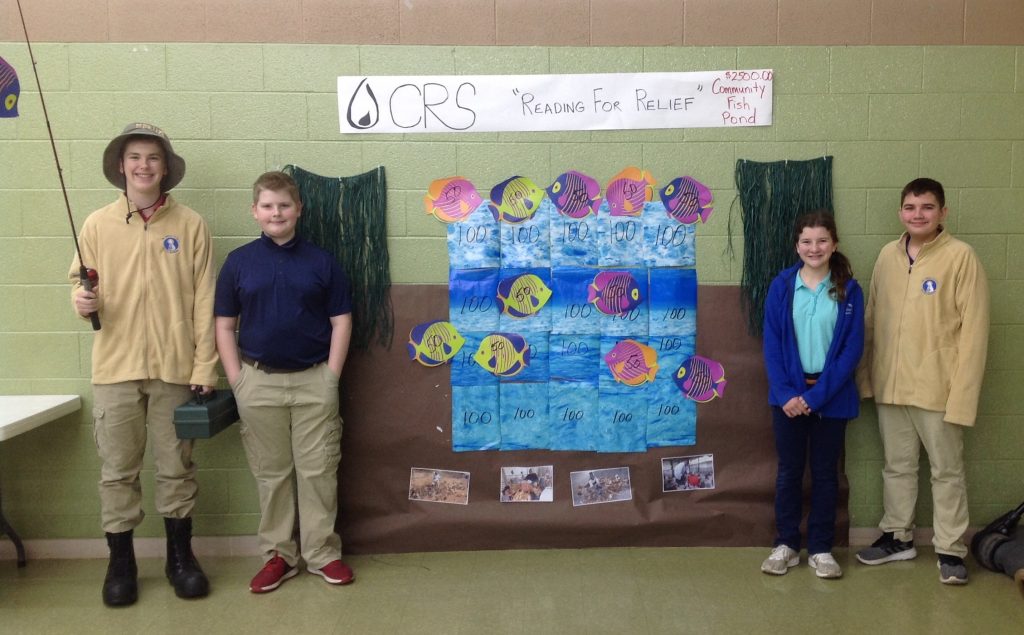 St. Mary of the Assumption School students in Avilla recently put their faith into action and turned their reading skills into help for the less fortunate. The students fulfilled a campaign to read books for which they had accepted pledge donations for the number of pages read. The determined students, led by the Student Council and media specialist Patricia Benedict, raised $2,650 and collaborated with Catholic Relief Services to provide a fish pond and chickens to parishioners of a Catholic church in a village in Ethiopia. — Provided by Tina Ball