Crews reached a milestone Thursday, April 5, in the construction of St. Francis Chapel on the University of Saint Francis campus, Fort Wayne. At about 9:30 a.m. the cupola, which will be the pinnacle of the chapel and the highest point on campus, was raised into place by a crane and then secured. The new emblem of the school’s Catholic identity is expected to be completed in the fall, and plans call for a cross to be placed atop the center of the cupola. — Joe Romie

FORT WAYNE — The Office of Vocations of the Diocese of Fort Wayne-South Bend and Father Andrew Budzinski of St. John the Baptist Parish invite Catholics across the diocese to attend the ordination to the diaconate of seminarian Spenser St. Louis in Rome.

The Fall Italy Pilgrimage will take place Sept. 18-29. Travelers will spend two nights in Venice, one in Siena, three in Assisi and four in Rome; they will also have the opportunity to attend the diaconate ordination at the Vatican.

Daily Mass will be celebrated, with Father Budzinski presiding.

The price of $4,500 per person is based on double occupancy and includes roundtrip motorcoach transportation to Detroit, roundtrip airfare from Detroit to Venice and Rome to Detroit, all transfers, breakfasts, daily dinners, tour guides for the entire trip, tickets to the diaconate ordination Mass, travel guard insurance, taxes and fees. A $1,000-per-person deposit is required.

Call or email parishioner Jeff Krudop at 260-434-6660 or [email protected] to secure a reservation.

FORT WAYNE — Bishop Luers High School senior Mitch Gigli was the recipient of the Sertoma Award, which honors an outstanding student-athlete, in March. Based on the core criteria of scholastic achievement, athletic distinction and demonstrated leadership, the Sertoma Award is the same today as it has been for over six decades.

At Bishop Luers High School, Gigli has served as vice-president and president of the National Honor Society, has been a Student Council representative for four years, treasurer of the Student Leadership Board, a student ambassador and a Sodalitas service leader.

At his parish, St. Elizabeth Ann Seton, Fort Wayne, Gigli serves as an usher. The son of Mike and Michele Gigli, he plans to study actuarial science at Purdue University.

Often considered the Heisman Trophy of Fort Wayne, the Sertoma Award recognizes the achievements of the student-athlete within the classroom and upon the arena of athletic competition. The Sertoma Award recipient represents the inner strength and determination within the human spirit to succeed at the highest level of accomplishment.

Each generation of Sertoma Award winners has contributed to society by excelling in areas of education, business, medicine, law and the arts.

Deadline to apply for Sigstein grants is July 1

HUNTINGTON — The deadline for applying for 2018 grants from the John Joseph Sigstein Foundation is July 1.

From their founding in 1922 by Father John Joseph Sigstein, Our Lady of Victory Missionary Sisters have been dedicated to living the mission of Jesus. They proclaim the Word of God, foster justice, stand in solidarity with those living in poverty and oppression, and promote the development of leaders. The John Joseph Sigstein Foundation was created to offer grants to organizations that will extend their approach to mission.

The Victory Noll sisters, as they are known, have served the people in mission centers across the United States. Through this foundation, they continue to have a presence in these areas. The foundation was established to promote and sustain the mission of God according to the charism of Our Lady of Victory Missionary Sisters in solidarity with all persons, especially those living in poverty and oppression.

The grant process is underway and applications are currently being accepted. Organizations applying for a grant must have 501(c)(3), or equivalent, status and be geared toward effecting systemic change.

Characteristics on which programs eligibility for funding will be judged include: promoting justice for those living in poverty and oppression; empowering persons to contribute to a more just and peaceful society; protecting and sustaining the environment, God’s creation; and contributing to the well-being of families.

Grant applications are available for download at www.olvm.org/jjsfoundation. For more information contact the foundation by email at [email protected], or by regular mail at John Joseph Sigstein Foundation, 1900 W. Park Dr., Huntington, IN 46750-0109. 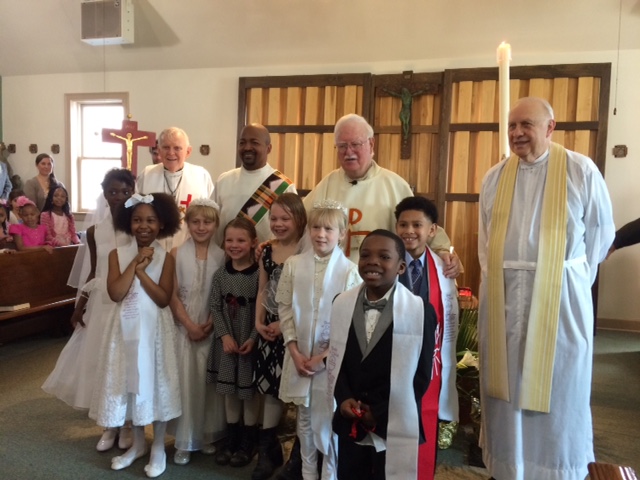 Josh Price, Jr., received the sacraments of initiation — baptism, confirmation and first Eucharist — at the parish’s Easter Vigil celebration. He stands, in front, with clergy and seven parish youth who made their first confession on Holy Saturday and received their first Communion on Easter Sunday at St. Augustine Parish, South Bend. — Mickey Price