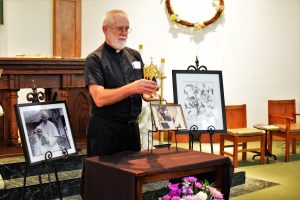 Father William Sullivan, pastor of St. John the Baptist Parish in New Haven, calls attention to a reliquary containing a first-class relic of St. Teresa of Kolkata during a prayer service held on her feast day, Sept. 5, at the parish. One prayer service took place during school hours, for the children, and another in the evening for parishioners and the public.

FORT WAYNE — The University of Saint Francis Department of Philosophy and Theology has announced the lineup of speakers for its 2017-18 Fall Lecture Series. On Sept. 13 the first of the series, “Fake News and the Fathers of Suspicion: Learning from Freud, Marx and Evagrius,” by Dr. Adam DeVille, has already taken place: Other topics, times and locations are as follows.

Oct. 11 — “The Message of Fatima: Then and Now,” by Sister Jacinta Krecek; Brookside Ballroom, 7 p.m.

All lectures are open to the public and free to attend. For more information visit philosophy.sf.edu.

MISHAWAKA — Marian High School is among the elite in preparing students for college, with 96 percent of graduating seniors ready for college-level coursework, according to a report issued by the Indiana Commission for Higher Education. This makes Marian tied for fourth in the state and the only local high school in the Top Ten.

According to Principal Mark Kirzeder, the school has a 100 percent graduation rate. Earning dual credit for college during high school is a key metric in ensuring success at the college level, and 83 percent of the Marian class of 2017 earned three or more college credits; 72 percent of these received over 15 college credits.

Marian students have unparalleled opportunities in the realm of science. Under the direction of Department Chairman Ken Andrzejewski, Marian science scholars achieved tremendous honors in 2016-17:

1. Six of fourteen students in the state selected to present their science research at the Indiana Junior Science and Humanities Symposium were from Marian, two of whom advanced to the National Symposium, finishing with a second place and an honorable mention.

3.Sixteen students were enrolled in the Advanced Science Research course and eight in the Independent Study program.

4. The Indiana Academy of Science awarded 11 grants to Marian students who applied based on their individual research.

5.  One student was selected to represent the state of Indiana in the Stockholm Junior Water Prize competition.

6.  For three of the past five years, Marian has won first place in state at the Indiana Junior Academy of Science competition.

7.  Thirty-Five Marian students over the past 27 years have been selected to compete at the International Science Fair.

Parents, faculty, staff and administration are dedicated to fulfilling the mission of Marian High School and living out the school’s motto of “Learn. Serve. Lead.” 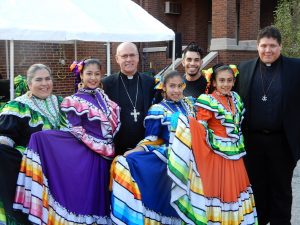 NOTRE DAME — A musical performance featuring the illuminated images of a handwritten Bible will be held at the University of Notre Dame on Sept. 24 at 2 p.m. Sacred art from The Saint John’s Bible will be projected on a large screen in Leighton Concert Hall at the DeBartolo Performing Arts Center during a unique vocal and instrumental concert that draws the audience into a meditation on Holy Scripture.

“Illuminating the Incarnation: A Musical Meditation on The Saint John’s Bible” will feature a 10-voice schola, two violinists and a keyboardist. Additionally, dance and Scriptural proclamations will accompany the display of illustrations from the Bible. Concert attendees will sit onstage with the performers to mimic salon-style concerts of the 19th century where musicians played for their audiences in living rooms.

The event will begin with a short presentation on the history and production of The Saint John’s Bible.

The seven volumes of The Saint John’s Bible Heritage Edition will be on display at the performing arts center for attendees to view. Calligrapher Donald Jackson, who spoke at Notre Dame in October, collaborated with Benedictine monks at Saint John’s Abbey and University in Collegeville, Minnesota and numerous scribes and artists to produce the manuscript.

Tickets cost $5 and can be purchased at performingarts.nd.edu. Seating is limited to preserve the intimate setting for the concert. Contact Brett Robinson, director of communications, McGrath Institute for Church Life, 574-631-6109, [email protected]

Fort Wayne-area black Catholics: The church is looking for you

FORT WAYNE — When Jesus saw the crowds, he had compassion for them, because they were harassed and helpless, like sheep without a shepherd.  Then he said to his disciples, “The harvest is plentiful, but the laborers are few; therefore, ask the Lord of the harvest to send out laborers into his harvest.” — Mt 9:36-38

The mission of the Black Catholic Advisory Board is as follows: “To help guide the diocese to seek and propose ways to effectively meet pastoral, social and cultural needs relative to Catholics of African descent; and to strive for the evangelization of our faith communities, the unchurched and the broader Church in order to promote unity, pride and understanding in the Church and Community.”