Equestrian Order of the Holy Sepulchre of Jerusalem investiture

INDIANAPOLIS — The North Central Lieutenancy, USA, of the Equestrian Order of the Holy Sepulchre of Jerusalem (covering the states of Illinois, Indiana, Kentucky, Michigan, Ohio and Wisconsin) held its annual meeting Oct. 20-22 in Indianapolis. The event culminated in the investiture of 49 new knights and dames in the order. Father Jacob Meyer, pastor of St. Monica Parish, Mishawaka, along with John and Patricia Becker of St. Vincent de Paul Parish, Fort Wayne, and Kirk and Adele Doran of St. Matthew Cathedral Parish, South Bend, were among those knighted by Raymond Leo Cardinal Burke, who presided over the investiture ceremony.

For further information about the order, visit www.eohsjnorthcentral.org. 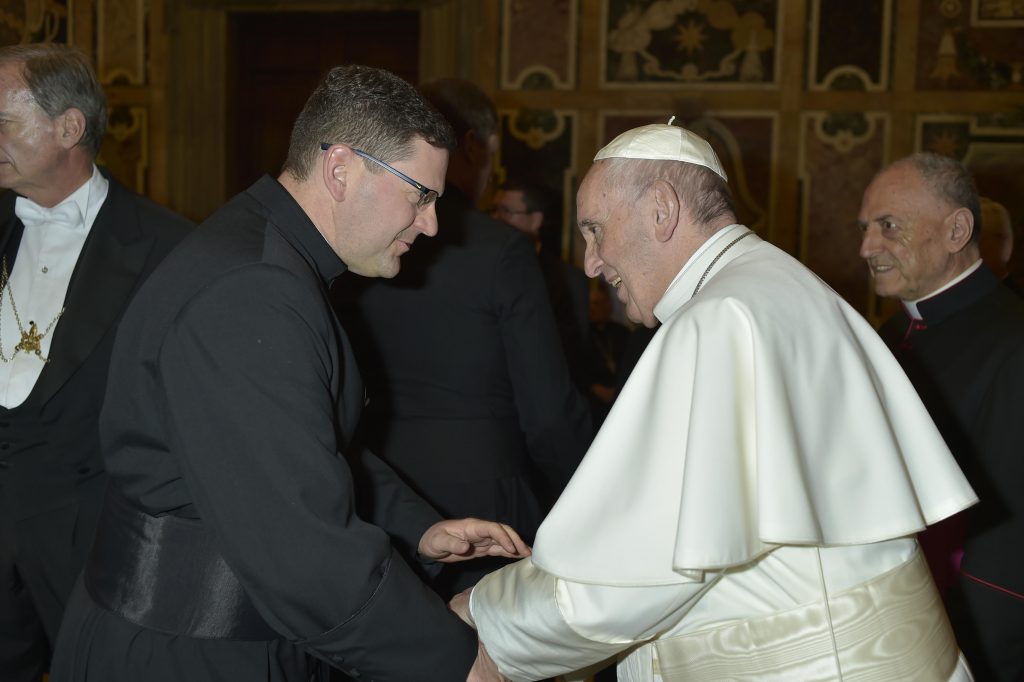 Photos by L’Osservatore Romano Two priests of the Diocese of Fort Wayne-South Bend, Father Mark Gurtner, left, and Father Jacob Runyon, right, were received in audience by Pope Francis on Nov. 25 at the Vatican. The audience took place following a Mass celebrated by the pope for participants in the “Course promoted by the Tribunal of the Roman Rota” on the subject of the new matrimonial process, which intends to “strengthen the faith of the holy people of God through charity.” 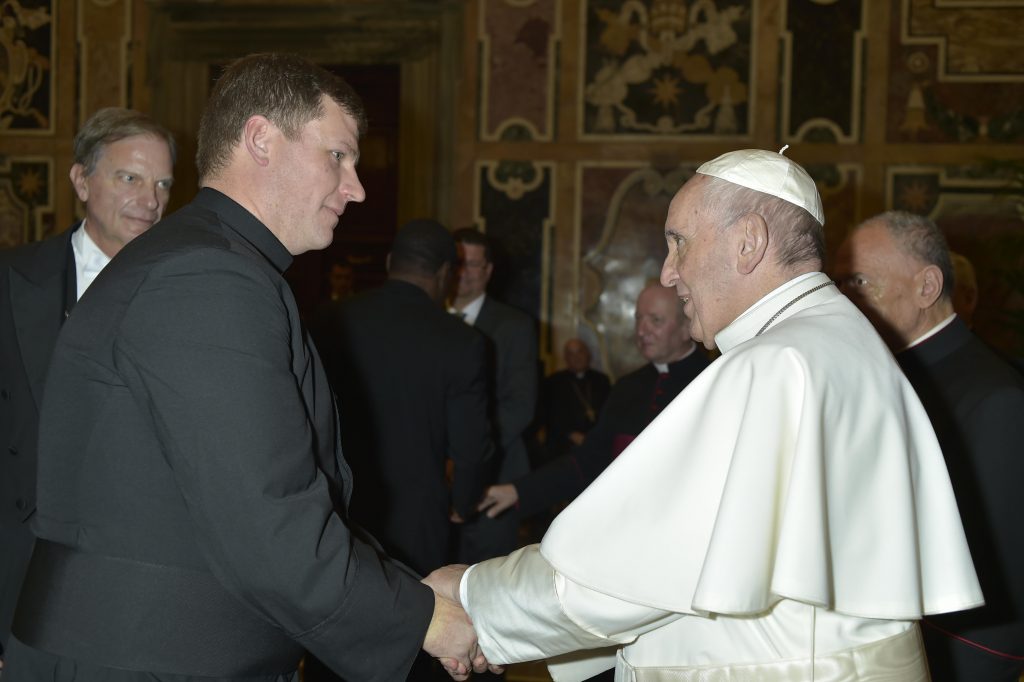 FORT WAYNE — The University of Saint Francis presents the lecture “Incarnate Wisdom Scripture” by Sister Felicity Dorsett, assistant professor of theology. The lecture will be on Dec. 10 at 3 p.m. in the Brookside Ballroom (former Bass Mansion), 2701 Spring Street.

In the writings of the Old Testament, the idea of “Christ-as-Wisdom” is foreshadowed. This Christ-as-Wisdom theme is taken up by New Testament writers, and Sister Dorsett will examine these passages in the context of Christmas and Christ’s birth.

Free and open to the public, the lecture is sponsored by the USF Department of Philosophy and Theology and the School of Liberal Arts and Sciences. For additional information contact Angie Springer at 260-399-8066 or [email protected].

NOTRE DAME — Mary and Jay Flaherty, together with their alma mater, the University of Notre Dame, will contribute $50 million in support of the University and its founding religious community, the Congregation of Holy Cross, to broaden and deepen the work of both institutions in service to the Catholic Church.

The $50 million in support will be expended in three ways.

The Flahertys have made a $20 million gift and Notre Dame has added another $10 million for the reconstruction and ongoing maintenance of Corby Hall, the on-campus residence and center of hospitality for the Holy Cross community of priests and brothers. The building will continue to bear the name Corby Hall.

The Flahertys also are making a separate $5 million gift to the congregation to benefit its aging religious.

Notre Dame, which has a long tradition of supporting its founding order, will donate $15 million to the congregation – $10 million for general needs and $5 million to establish an endowment in the university’s Office of Mission Engagement and Church Affairs to strengthen collaboration between the university and congregation throughout the world. 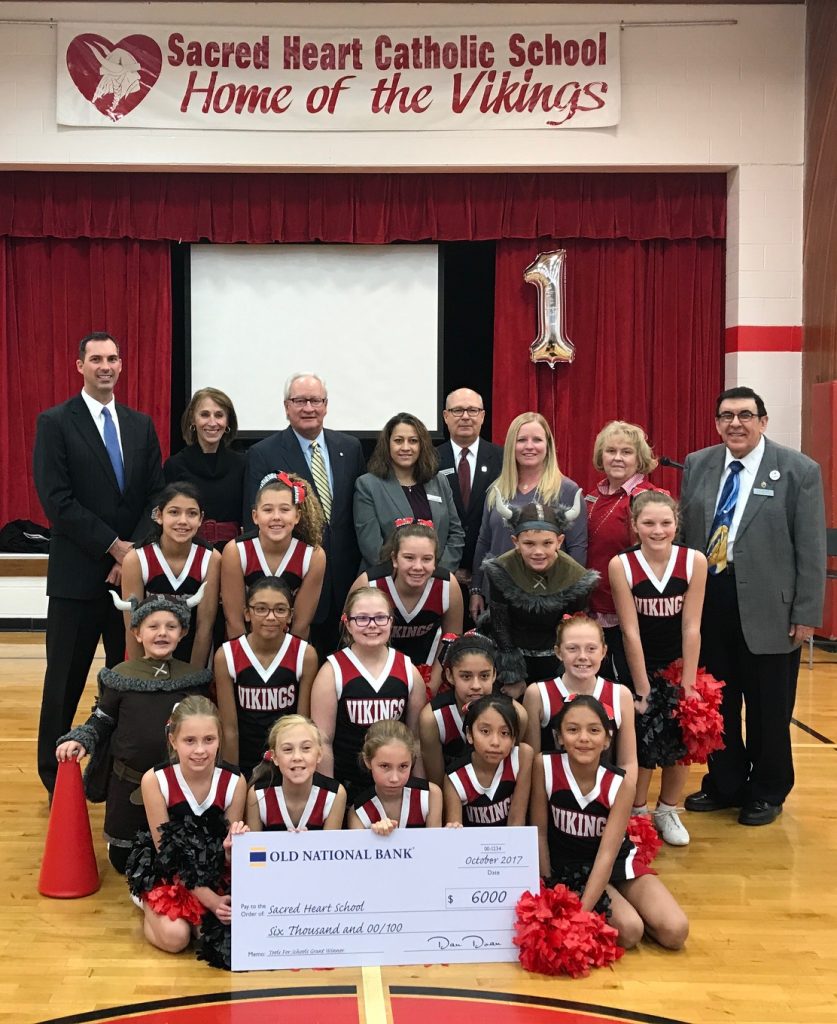