“Finally, be strong in the Lord and in the strength of His might. Put on the full armor of God, so that you will be able to stand firm against the schemes of the devil.” – Ephesians 6:10-11

Nearly 60 men from across the Diocese of Fort Wayne-South Bend answered this battle cry Feb. 11-13, united by the words of St. Paul in his letter to the Ephesians. The Armor of God Winter 2022 Retreat, held at St. Felix Catholic Center in Huntington, called men of God to change the world by making an impact. It also challenged its attendees to address the “why” behind this call by reflecting on the importance of their mission. 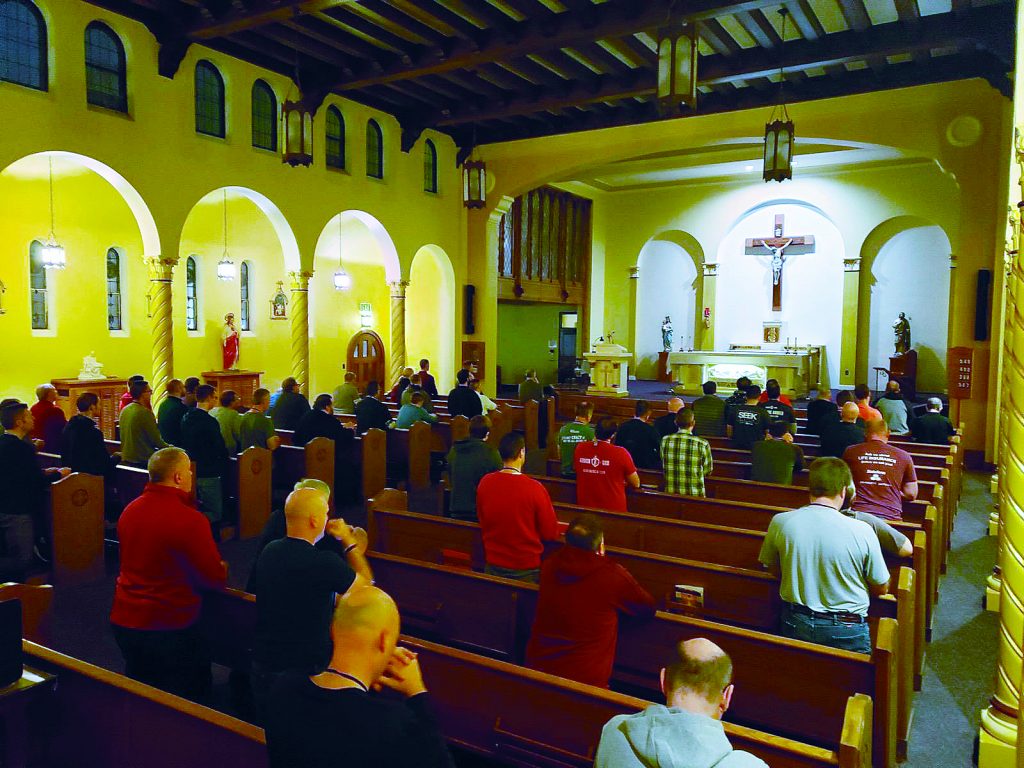 Photos provided by Tommy Lapsley
Men from around the Diocese of Fort Wayne-South Bend came together to discern their calling as fathers and spiritual leaders at the Armor of God retreat at St. Felix Catholic Center in Huntington Feb. 11-13.

Armor of God is a men’s apostolate that was formed by lay parishioners of St. Vincent de Paul Parish in Fort Wayne. Its mission is to “arm men to be the spiritual leaders that God designed them to be in their homes, workplace, and churches.” The group hosts monthly spiritual briefings at St. Vincent de Paul, but its events are open to men of any parish and at any stage in their spiritual journey. Armor of God also holds a retreat every six months, and while this was its fourth retreat since the group’s inception in 2020, it took on a distinctly new shape.

“Every one of our retreats is going to be different,” said Rob Gregory, Armor of God chairman of the board. “This time, we had more dedicated time for the men to be on their own and with their battalions, as well as we force them to discern a core mission and laminate it and walk out there with contact information for a group of men that they can continue to group with thereafter. I am very proud of what we did on this retreat.”

A total of 13 different parishes were represented at the retreat, including ones in Angola, Granger, Warsaw and even Indianapolis. Father Jay Horning, who serves as the Armor of God spiritual advisor, made it clear in his opening comments that he was touched by the commitment of the attendees.

“Thank you for wanting to grow,” he said to the men present. “I am proud of you and I love you.”

This set the tone for a series of speakers who shared powerful and personal testimonies over the course of the weekend. Each talk was focused on a different “why” that men were challenged to contemplate, such as why holy fraternity is necessary, why the Mass is essential, why they are Catholic and why the Church needs these men now. After each message, men would break off into their small groups, or battalions, to discuss the topic further before reporting their deliberations back to the main group.

Shawn Dundon, who serves as Armor of God battalion committee chair, said he was struck by the theme of fatherhood in particular.

“I think there’s been a lot of people who have presented who’ve talked about the importance of a fatherly role,” said Dundon. “If we don’t live up to that, the effect that it can have, from a positive standpoint or a negative standpoint, depends on how we treat that. I think that’s one thing I always challenge myself with.”

The retreat was also deeply rooted in the sacraments. Father Daniel Whelan, parochial vicar of Our Lady of Good Hope Parish in Fort Wayne, spent his entire weekend at St. Felix, celebrating Mass with the men on Saturday afternoon. That evening, Father Whelan and Father Horning led the group in eucharistic adoration and Benediction, while also being available for reconciliation. Both priests finished the night with a healing service. The retreat concluded with Sunday Mass, celebrated by Father Daniel Scheidt of St. Vincent de Paul.

By the end of the weekend, many of the men in attendance had experienced firsthand the impact of holy fraternity.

“I think it’s everything,” said Nick Miles, a parishioner at St. Elizabeth Ann Seton in Fort Wayne. “Without it, I don’t think I’d be able to talk out a lot of what I struggle with, and there’s just something about that fraternity with each other that helps us as men grow together.”

Pat McLaughlin, a parishioner at St. Mary in Huntington, recognized both the importance of men willing to share their hearts with each other and the lack thereof in today’s society.

“We’re a minority, I think, and it needs to become that we’re more of a majority,” said McLaughlin. “To have other men that you can invite in, trust in, with your faith and your spirituality makes it easier, in my opinion.”

The challenge of any retreat is taking the mountaintop experience and living it out at home, in the workplace and in the community. Miles, for one, said he is ready for the challenge.

“I’m going to try to make an invigorated effort at sustaining my holiness, through fraternity. Just understanding that I need to lean on my brothers a little bit more to remain close to God.”

It’s a divine pursuit that Father Horning said he can already see at work in these men.

“I think the biggest impact that I’ve had is the result I see afterward, which has been men who authentically are embracing not just their masculine role, but also are embracing their role as leaders of their families, leaders of the Church,” said Father Horning. “So, I left with a great confidence and a great joy that I have warriors. I have comrades. I have people with me to go into battle for the future of the Church and for souls.”

Armor of God’s next spiritual briefing will be held on March 16 at St. Vincent de Paul’s Msgr. John Kuzmich Life Center, while the fall 2022 retreat is set for the weekend of Oct. 21 at St. Felix Catholic Center. 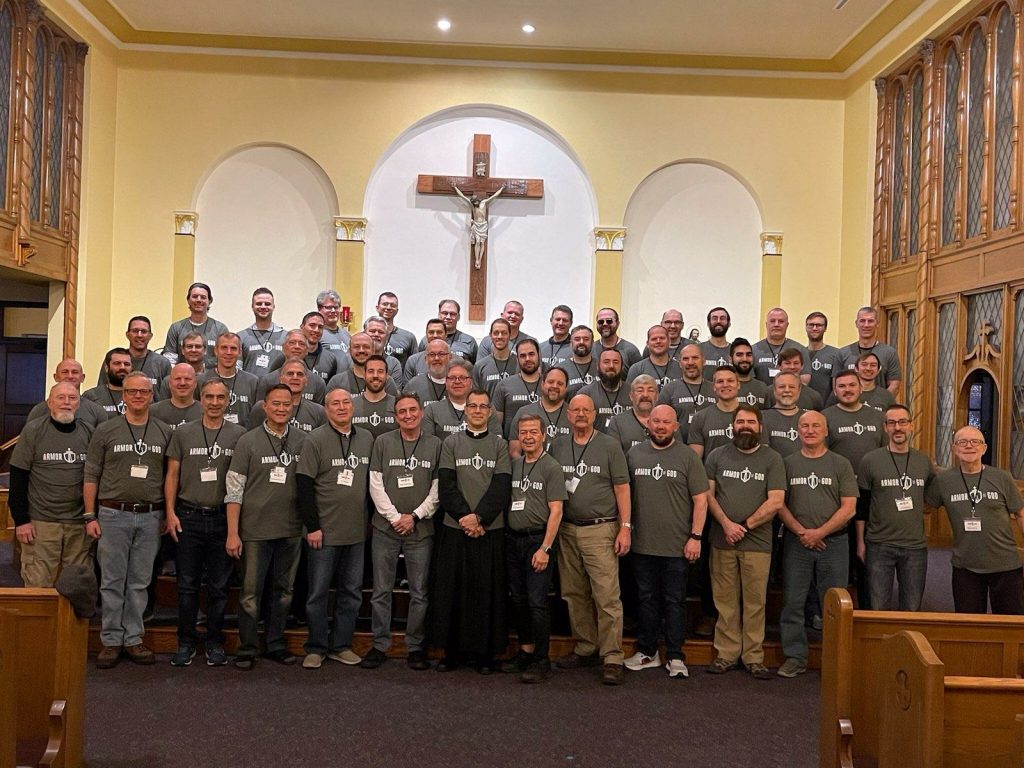