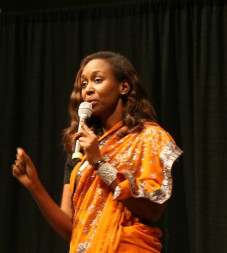 For more photos from the conference visit the photo gallery.

FORT WAYNE — A powerful message of mercy and forgiveness was witnessed by more than 800 women from throughout the Diocese of Fort Wayne-South Bend at the Arise Women’s conference on Saturday, Sept. 24.

The conference, titled “Offer Forgiveness and Receive Peace,” was sponsored by the Office of Spiritual Development and Evangelization and cosponsored by Redeemer Radio AM 1450. It enjoyed a new and larger venue for its faith-filled audience at the Allen County War Memorial Coliseum this year.

The Arise conference, in its second year, began with a special Mass of Holy Mary, Queen and Mother of Mercy celebrated by Bishop Kevin C. Rhoades, who wore a chasuble depicting Mary of Czestochowa. In his homily, Bishop Rhoades reflected on the mercy of God and how Jesus reveals that message in the Gospels.

“The message of divine mercy is at the heart of the Gospel which our world so desperately needs to hear,” Bishop Rhoades said. “This is the message which our speakers today will share with us.”

Bishop Rhoades reminded the rapt audience that “We honor Mary today as the Mother of Him who was Mercy Incarnate. She has given to the world Mercy Himself and she shares in this attribute of her Son. She teaches us the gracious love and mercy of her Son and she intercedes for us with the merciful love of a mother for her children.”

Those words were brought to life in the inspiring account shared by the day’s first speaker, Rwandan genocide survivor Immaculee Ilibagiza, whose DVD and detailed personal testimony spoke of the traumatic events that took place in 1994 when she and seven other women went into hiding in the cramped bathroom of a pastor’s home in Rwanda in an attempt to escape death. After 91 painstaking days she was able to escape and subsequently learned that most of her family were among the close to a million people who had been brutally murdered by Hutu militia extremists. In her powerful testimony, the passionate mother of two spoke of the stringent process of deepening her prayer life that culminated in her decision to forgive the man who murdered her mother and brother.

“The rosary brought me to see the grace of forgiveness,” said Ilibagiza humbly, admitting her deep fear of and anger toward the militia men.

Over time, as she meditated on Christ’s passion, she realized that the murderers were “blinded by hatred … and had clouded judgment.” She came to understand that God is the Father of all and said, “If you need mercy — why not the killer? … Forgiveness brings peace and freedom.”

She went on to describe how she became an author and speaker who is passionate about sharing her story of mercy, hope and love and has written several books, including New York best seller “Left to Tell; Discovering God Amidst the Rwandan Holocaust” (Hay House, 2006). Proceeds from her work go to her Left to tell Chariable Fund which directly benefits children orphaned by the genocide. Additionally, she and her one remaining brother have returned to the ruins of her parents’ home and rebuilt it into a community house of peace and hope.

Concluding the first session, Ilibagiza admonished the audience that “no matter what happens, hold on to God. Know there is always hope. If you are conflicted about whether you want to be right or be kind, choose kindness.”

The humble message of love and forgiveness was not lost on the women in attendance. Rhonda Noll of St. Vincent de Paul Parish in Fort Wayne was touched by Ilibagiza’s story and said, “It was amazing — all the horrible things that happened to her and that she can go back and forgive. She rebuilt her parents’ home and is still reaching out. It’s touched me how she’s made this her purpose.”

Immaculate Conception, Auburn, parishioner, Carleen Park agreed that Ilibagiza’s testimony was “an eye opener.” She said, “We’re so busy everyday that we sometimes don’t take the time to see our blessings.”

Throughout the day the sacrament of Penance was offered in an adjacent area by 13 confessors from around the diocese. Book and vendor tables offering various Catholic items and events were also available, as was a book signing by Ilibagiza.

Following lunch, sister of the Servants of the Immaculate Heart of Mary Sister John Sheila Galligan, professor in the Department of Theology at Immaculata University in Pennsylvania, spoke on secular vs. Christian forgiveness.

She described secular forgiveness as being about “me,” whereas Christian forgiveness is always about the other. “It’s not just for me. It’s a gift I freely give to the other. … It’s a gift, because they don’t deserve it,” said Sister Sheila.

And, she said, even if the other does not respond to the gift, it becomes a release from all the bitterness of unforgiveness. “Then you leave it to God,” she said.

Sister Sheila cautioned the women that forgiveness is sometimes a long process to be worked through, beginning with acknowledging the intensity and duration of one’s anger. “We have to address that first,” she said, adding that only then can forgiveness take place.

One practical tool that Sister Sheila offered was instruction on a blessing prayer, where the other’s name is inserted into the prayer of well wishes. Sister Sheila’s assignment to the women present was to “pray for two people you love who have hurt you, for the next month.”

“Sometimes they change,” she said with a smile. “But we always change!”

Sister Sheila’s message, with its practical application, was thought provoking for many of the women in attendance.

Barb Williams, parishioner at St. Pius X Parish in Granger was invited to the conference by her daughter Melanie, who saw it as a “mother-daughter bonding time to grow in faith together.” Williams said, “I was looking forward to sister’s talk about the practical ways to bring forgiveness to daily living. We need to live our lives with forgiveness.”

Retta Kohrman of St. Charles Parish in Fort Wayne agreed and said, “God wants us to get into the depths of faith, love and mercy — not just the surface.”

Following a short break the women returned to once again hear Immaculee Ilibagiza speak, this time on her experience with Our Lady of Kibeho, who appeared to eight young people in a remote village near her home prior to the genocide.

Ilibagiza, who holds a rosary throughout her presentation, spoke of Our Lady’s messages informed through the students that insisted that “we pray sincerely and with forgiveness.” Kibeho is the first Vatican-approved Marian site in Africa.

Ilibagiza went on to explain that in her country dancing accompanied many ceremonies and that Our Lady of Kibeho was charmed by the dancing of the children gathered in the village.

The powerful message of love and mercy was then performed on stage and in the audience as Ilibagiza asked the women of the conference to come to their feet and dance with her to music of her country. In closing, the gracious and compassionate Ilibagiza pledged, “May God heal our hearts. … I will keep you in my heart.”

A recently released documentary “If Only We had Listened,” produced by Immaculee Iligabiza and Sean Bloomfield reveals the miracles and prophecies of Kibeho. The informative and moving documentary is now available on DVD. For more information visit www.kibeho.net.

To learn more about Immaculee Ilibagiza and her powerful message of forgiveness and hope visit www.immaculee.com.