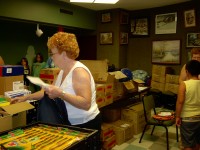 Mary Muzzillo fills backpack with school supplies for a child in need.

AUBURN — Giving of yourself — your time and talent — has long been a cornerstone of the Catholic Church. This honored tenant is fully realized in northern Indiana through Catholic Charities’ Retired and Senior Volunteer Program, or RSVP. The long-standing program brings together area seniors who want to give back to their communities and a long list of agencies who desperately need volunteers. The result is a match made in heaven.
RSVP, also known as Senior Corps, is America’s largest volunteer network for people age 55 and over. The nationwide program boasts over 500,000 volunteers across the country who are tackling tough issues in their communities. 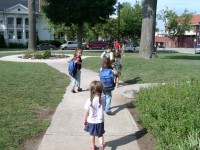 Shown is a group of children after having received their backpacks filled with school supplies.

Catholic Charities sponsors the northern Indiana Retired Senior Volunteer Program through the Corporation for National and Community Service. The RSVP office in Angola serves DeKalb, LaGrange, Noble and Steuben counties, while St. Joseph and Elkhart counties are served by a RSVP office in South Bend. The Auburn bureau has close to 900 volunteers who generously give their time and talents to 120 different sites throughout the community, including hospitals, schools, nursing homes, parks and other nonprofit entities.

Patti Sheppard, Senior Corps supervisor in Auburn, has been with the organization for nearly 30 years. She loves her job and explains one of the reasons she’s stayed with it, “I am so fortunate to work with people who want to make their community a better place to live.”
She goes on to say, “To give of yourself freely like our volunteers do is simply amazing.”

In addition to the 120 volunteer sites, RSVP of Auburn also hosts a number of programs within its building, including the Community Center of Caring Food Pantry. Now in its fifth year, the food pantry works to put food on the table of hungry individuals and families throughout DeKalb County. In 2008, RSVP helped get food to 4,150 families which translates into more than 14,400 individuals.

What RSVP gives back to the community doesn’t end there. The Auburn office also works to screen children for amblyopia, commonly known as “lazy eye.” The condition can be easily treated if diagnosed early in life, usually by the age of three. Otherwise, it can permanently impair vision. RSVP volunteers have been trained as screeners, traveling to area preschools, day care or community events to test children for free.

The Gift of Warmth program is another worthwhile volunteering effort carried out by RSVP in Auburn. Coats, hats, mittens and scarves, many of them handmade by Senior Corps volunteers, are collected for people in need. Many of these items go to the homeless, who may otherwise not have any protection against cold weather. Last year, working in conjunction with local factories, The Gift of Warmth distributed between 1,200 and 1,500 coats.
Other programs carried out at the Auburn office range from filling backpacks for underprivileged students each school year to disaster preparedness training provided by the Office of Homeland Security and the Red Cross.

Away from the RSVP office, you can find volunteers throughout the community. “Our volunteers are at so many different places — anywhere there is a need, really,” says Sheppard. One of those places is Auburn’s popular World War II Victory Museum where volunteers give tours and serve as guides. “We are lucky to have some World War II and Korean War veterans placed at the museum,” explains Sheppard. “It’s a great opportunity for them to share their unique perspective — a perspective that won’t be around forever.”

Although RSVP is designed for people aged 55 and older, anyone who is interested can join. Sheppard says her office’s oldest volunteer is 95, although she’s had two volunteers reach the age of 101. She sees the Senior Corps as a way for older members of the community to remain active and vibrant, “RSVP gives people a way to make friends, get out of the house and connect with the community. It’s also a great way for seniors to share their wonderful wealth of knowledge.”

One of the major strength of the program is its flexibility, letting the participants choose where and when they want to volunteer and how involved they want to be. Some volunteers help at several locations while others stick to one site or program for long periods of time. In addition, individuals are placed at site based on their interests and skills. Often, volunteers choose to remain in fields they’ve worked at for years, such as retired teachers signing on to tutor struggling students. However, any necessary training is provided by the placement sites, so volunteers also have the option of getting involved in something completely new to them.

For anyone interested in volunteering for RSVP, the process is simple. If you live in any of the six counties, including DeKalb, LaGrange, Noble, Steuben, St. Joseph and Elkhart, contact either the Auburn or South Bend office. The next step is filling out a simple registration form. Finally, RSVP will call you to discuss your interests, talents and schedule. “It’s very easy to get involved,” says Sheppard, “and there’s always a need out there that has to be met.”