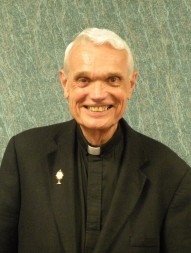 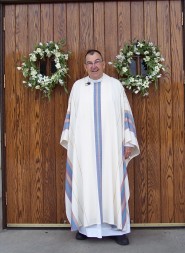 Father Barry England stands in front of the main doors to St. Bavo Church, built in 1904 to serve the Belgian people of Mishawaka.

MISHAWAKA — On a recent Sunday morning Father Barry England, pastor of St. Bavo Parish in Mishawaka, stood on the sidewalk in front of the church, greeting parishioners after Mass, as he usually does. That day, however, the greeting was bittersweet as parishioners stopped to express their sadness that Father England will be leaving St. Bavo to retire on June 23.

“We just adore him, and we’ll miss him greatly,” said Sue Alwine, who has been St. Bavo Parish secretary for 20 years. “But we’re so happy for him. He deserves this more than anyone I know: He’s a wonderful pastor and a wonderful boss and has done a great job here. It’s nice to know he’ll enjoy his retirement. We’re happy for him but sad for us.”

Father England has served the diocese in priestly ministry for 37 years, the last 15 as pastor of St. Bavo Parish. Now he’s looking forward to some quiet time to rest, pray, read and brush up on his golf game with a lesson or two.

“I’m really appreciative of Bishop Rhoades allowing me to retire while I’m still in relatively good health,” Father England told Today’s Catholic, and he noted with satisfaction that a significant number of young men are studying for the Priesthood in this diocese who will follow in the footsteps of the retiring priests.

Father England has chosen the perfect venue for all the retirement activities he anticipates: an apartment at Holy Cross Village on the campus of Holy Cross College, with easy access to the college chapel and library, as well as the University of Notre Dame Burke Golf Course right across the street. He also hopes to attend some of the programs and lectures at Notre Dame and Saint Mary’s College, as well as Holy Cross College.

In addition to those nearby assets, his apartment in the Riverside building at Holy Cross Village has an especially good vibe, for it had been the retirement apartment of another diocesan priest, the late Father Leonard Chrobot.

While Father England is retiring as full-time pastor of a parish, he still will be exercising his priestly ministry when local priests need a helping hand, doing what he loves most about being a priest: ministering to the people and celebrating the sacraments.

“Being a parish priest is where the action is,” he said, pointing out that a priest ministers to the people from birth to death and tries to be present to the people through bad times as well as good times.

“Your presence means more than anything” in difficult situations, Father England explained, saying that advice applies to laity as well: “Even if you don’t know what to say, that’s okay; just be there.”

After his ordination in 1968, Father England was assigned as associate pastor at St. Mary Parish, Huntington, where he also was named master of ceremonies for the Huntington Deanery and area chaplain of the Diocesan Catholic Committee on Scouting.

He then served as associate pastor at St. Charles Borromeo Parish in Fort Wayne from July of 1971 to January of 1979, when he was named pastor of St. Joseph Parish at Roanoke and St. Catherine Parish, Nix Settlement. During his time there, Father England led a study for the diocese to determine the feasibility of establishing a new parish in Aboite Township, which was experiencing a population boom. The result of that study is St. Elizabeth Ann Seton Parish, established in 1988 and now one of the largest parishes in the diocese.

While leading St. Joseph and St. Catherine parishes, Father England was appointed chaplain for the Diocesan Council of Catholic Women and was made a judge on the diocesan marriage tribunal, where he served for four years.

In 1982, Father England was appointed pastor of Queen of Angels Parish in Fort Wayne, where the bishop also appointed him to the board of directors of United Way of Allen County. From 1988 to 2000, he was pastor of St. Anthony Parish in South Bend before moving on to his last assignment at St. Bavo, where he also took on the role of chaplain to the Mishawaka Knights of Columbus Council 1878.

One of the greatest joys of the Priesthood for Father England has been seeing the gift of faith in people who live their Christianity every day, he said, and he added that he also has appreciated the support of parish staff and parishioners and seeing them take ownership in different aspects of the parish.

With his duties as a parish priest as well as his outside appointments, Father England kept very busy, he said, but he learned something new every day.

“As a pastor you wear many hats, and I loved the ministry part,” Father England said. “I won’t miss attending meetings, though,” he quipped.

HUNTINGTON — “… And the wise man’s heart knows times and judgments; for there is a time and a judgment for everything.” — Eccl 3:5.

As Father John Pfister at age 75 senses that time’s toil on his body makes retirement a sensible judgment, he recalls an event far back in time when he was 9 and a highway accident claimed the life of his father, his hero, when he made the judgment to become a priest.

From that early age to the time of ordination is quite a stretch; when asked what his thoughts on May 28, 1966, were as Bishop Leo A. Pursley placed the oils of Holy Orders on his hands, Father Pfister replied, “I was a “lifer”… having spent six years at Our Lady of the Lake Seminary at Lake Wawasee and seven years at Catholic University in Washington, D.C., so for a long time I had looked forward to “getting out” and living life as a priest. So as I lay prostrate on the floor of the cathedral in Fort Wayne and heard the choir singing the litany of the saints I thought — ‘Golly … here I am … we made it!’”

He was chaplain of the athletic department and after five years, became guidance director at Bishop Dwenger.

On July 1, 1969, Father Pfister was appointed diocesan director of religious vocations, an office he would hold for a number of years and a cause which he continues to hold close to his heart.

The phone rang. A cultured voice combining authority and kindness said that “Bishop (William E.) McManus would like to see you … etc.” Such calls launch a squadron of belly butterflies in full flight at high speed … making one wonder, what have I done, or what am I going to do? The answer in this case meant that Father John Pfister was to receive his first pastorate at St. Jude Parish in Fort Wayne.

Although he had always pictured himself involved in parochial life, this summons came at a time when he deeply enjoyed teaching, his vocational work and the involvement with the sporting activities at Bishop Dwenger. However, once installed as a shepherd, he fully savored the phrase, “I know mine and mine know me.”

This love of parish life and of the families there became a comfortable arrangement for eight years and seemed like it could go on and on. But then the phone rang again and this time it was Bishop John M. D’Arcy who “wanted to see him” and the message was  “John, I need you at St. Mary Church of the Assumption in South Bend.”

It was bittersweet to leave “his first parish,” but once again, he found more loving families and friends in South Bend and served there for six years when his next assignment brought him back to Fort Wayne as pastor of Queen of Angels. After 11 years at Queen of Angels, life there was so good that he thought, “This is where I’ll end my days,” when once again a visit to the chancery meant another new assignment and this time he was going home to Huntington.

It was nearly full circle for Father Pfister. He was in his hometown but not his home parish. Huntington has two parishes — Sts. Peter and Paul and St. Mary — and between the two of them they have served the faithful for nearly 300 years and blend harmoniously with a combined school system.

So after 49 years of active Priesthood, Father John Pfister will retire from St. Mary’s and looking back, he considers himself richly blessed. As a priest, his favorite ministries were saying Mass and hearing Confessions. Through the Mass, he brought Jesus to people and people to Jesus. As a confessor he shared the joy of a person being absolved of sins and getting a new start. Looking back at his footsteps, he sees those of Christ. Quietly he says, “I feel good about giving my life in this way.”