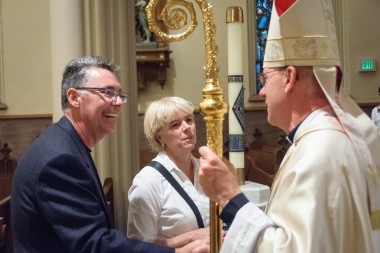 FORT WAYNE — Health care professionals and members of the Dr. Jerome Lejeune Catholic Medical Guild of Northeast Indiana gathered on Wednesday, Oct. 8, to hear remarks by Matthew Hanley, a senior fellow at the National Catholic Bioethics Center, during his visit to the Fort Wayne area.

The evening began with the second annual White Mass for all medical workers and their families which was celebrated by Bishop Kevin C. Rhoades at the Cathedral of the Immaculate Conception. Mass was followed by a banquet at St. Mary Mother of God Church nearby where Hanley was the featured speaker on the subject, “Ideological Medicine: Serving Politics, Not People.”

“Ideology and ethics are antithetical terms,” Hanley began. While ethics is a set of moral principles or rules of conduct based on right and wrong, ideology is a body of thought guiding a political or social program which derives its ideas from feeling and sensation. Ideological medicine, then, caters to popular whim rather than what is morally right for patients.

Hanley referred to the current Pink October breast cancer awareness campaign as an example. While the campaign promotes “full-on awareness,” it promotes mammograms as a safety measure. While mammograms provide early detection of breast cancer, they are not a preventative measure, he argued. Women can help protect themselves from breast cancer by giving birth, nursing those babies and avoiding altogether the carcinogenic birth control pill. We don’t hear about those preventative measures in the secular press, said Hanley.

Hanley also spoke at length on the AIDS epidemic in Africa. He has traveled extensively there promoting the Catholic Church’s response to the problem and has authored the book “Affirming Love, Avoiding AIDS; What Africa Can Teach the West,” which was awarded a best book prize by the Catholic Press Association.

The popular government-promoted risk reduction techniques of condom use, treatment of sexually transmitted infections (STIs), counseling and testing have not led to a decreased risk of AIDS. Instead, many studies have shown that HIV prevalence rises along with condom sales.The Catholic Church teaches abstinence and fidelity as solutions to the AIDS problem, said Hanley, and that has shown marked success in recent years. “It is never the role of the Church or its agencies … to help people do the wrong things more efficiently or safely,” he pointed out.

In conclusion, Hanley said that medicine needs a higher view of man. The problem of risk reduction as a philosophy is the implication that self-destructive behavior is unavoidable and that man has no capacity to change. Enter the Catholic health care professional who must witness to a higher moral and ethical truth, said Hanley. In an era of ideological medicine, he or she must avoid the “fashions of the day” and serve as witness to God’s love.

Dr. Tom McGovern, president of the Catholic Medical Guild and host of the evening’s event, closed with a plea to those in attendance. “Unless we band together, we will fall apart due to the pressure of our culture. … Be Catholic first,” he said.