There’s a new set of local reasons to celebrate Black Catholic History Month, observed each November as a time for looking back and looking ahead.

The reasons emerge out of the University of Notre Dame archives department, which in 2016 took up preservation of an abundant number of documents and photos donated by the National Black Catholic Clergy Caucus. The archivists have now created online resources to aid public access to the organization’s 50 years of records.

No one has sorted through the historical treasure more enthusiastically than Deacon Mel Tardy, who serves St. Augustine Parish in South Bend and was elected in July to serve as president of the NBCCC for the next two years.

“I wanted to learn more about the organization” in order to be more effective in the advocacy and planning position he now holds, said Tardy, who also works at Notre Dame. “It really humbles me, because I think of some of the people who have served in this role and the impact the organization has had over the years.”

Caucus members include African American bishops, priests, brothers, deacons and seminarians. It was founded not long after the assassination of the Rev. Martin Luther King Jr. in 1968.

Amid the sometimes violent racial tensions that followed, Deacon Tardy said, members of the clergy felt a duty as black Catholics to respond with urgent comments and proposals that would address racism within the Church in America. 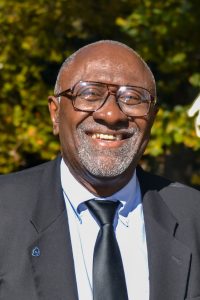 Brother Roy Smith, CSC, who works on the campus of Holy Cross College, Notre Dame in South Bend, recalled being moved by the story of those founding days, given the perspective he gained later during his term as NBCCC president. One reaction in 1968 was an address made to the assembled U.S. bishops by New Orleans Auxiliary Bishop Harold Perry, SVD, a caucus member who at the time was the country’s only African American bishop.

Bishop Perry cautioned at the time that the Church must not be seen as a racist institution. He relayed proposals such as the ordination of additional black bishops, as well as leadership actions in support of predominantly black parishes and schools.

“I get humbled and teary-eyed, thinking of what he did and the courage it took,” Brother Smith said in an interview with Today’s Catholic. He saw the event as part of a compassionate, ongoing effort to prevent African Americans, struggling with issues of identity and justice, from feeling they had to “choose between being black and being Catholic.”

NBCCC archives, assembled by the group over many years and now catalogued by Notre Dame, help shed light on the responses considered both in the short term and in the years that followed, Deacon Tardy said.

“The conversations were not easy,” he remembered, but the caucus helped generate changes that over time have shown good will and showcased the persistent, forgiving nature of African American Catholics.

The records of numerous meetings, conferences, surveys and reports provide evidence of the steps taken and their productive results. The caucus successfully advocated for nationwide observance of Black Catholic History Month, the creation of Church oversight groups to stimulate interracial dialogue and the establishment of the Institute for Black Catholic Studies to form leaders at historically black Xavier University of Louisiana.

The design of the NBCCC, grounded in the role of ordained clergy, excluded religious sisters from membership, but this led to the founding of the National Black Sisters’ Conference. That and other groups created in succeeding years, such as one for African American deacons and their wives — the National Association of Black Catholic Deacons — have built strong collaborations with the caucus to consider issues and convene meetings, Deacon Tardy said.

He added that amid continuing discussions about black-white relations and current concerns about trends, including a serious shortage of religious vocations among African Americans, the archives deserve increased attention because they can give hope. Young people in the black community who say “show me somebody like me, and I’ll follow” now can find more examples of productive engagement.

A prodigious collection of photos through the years gives visual evidence of collaborations and participation in formal and informal Church life. Images from one NBCCC event show an address by Sister Thea Bowman, who died in 1990 and has been declared a Servant of God as the first step in the path toward sainthood.

This is seen as a source of encouragement, alongside the fact that five other African Americans also are being considered for canonization. One of them, Venerable Father Augustus Tolton, was the subject of a nationally touring play sponsored by the Diocese of Fort Wayne-South Bend in April 2018.

Brother Smith said scholars and other writers need to tap into the rich details of the archives, which can yield a fuller story of the Catholic Church from an African American perspective.

The caucus and its archives necessarily look back at history as a basis for insight but primarily are focused on progress for the future, Deacon Tardy said. A new strategic plan for the group lists six priorities: vocations, evangelization, education, membership engagement, social justice initiatives and appropriate cultural expression in liturgy.

Another major development with local impact will occur in July 2021, when the caucus will partner with other African American groups to hold a joint conference on the Notre Dame campus. Resources from the archives will be on display, and black Catholic clergy and religious from around the country will gather for Mass with the local community in the Basilica of the Sacred Heart.

The university’s attachment of an online caucus index to numerous other resources of American Catholic history found throughout archives means that a wealth of information is newly available and able to grow. Actual observation of archived materials must still be scheduled through university channels, but retired senior archivist Kevin Cawley reported last year in American Catholic Studies newsletter that an online search at the archives.nd.edu website yields “about 4,050 results.”

The bottom-line result, as Brother Smith put it, is an education that too many Catholics have not yet experienced. “The archives are a wonderful thing to have so future generations can see that there have been, and are, active black Catholics, concerned black Catholics.”

The lesson ties in with the bold mission of the NBCCC as it begins its second 50 years of service to the African American Catholic community through its clergy, Deacon Tardy said. The archives tell “the story of a people who, despite challenges and difficulties, remain faithful to the Church and the promises of the Church.”