INDIANAPOLIS (CNS) — Expressing sorrow for the loss of life in yet another mass shooting in the U.S., this time at a FedEx facility in Indianapolis, Archbishop Charles C. Thompson prayed for the victims and their families.

He also prayed that “these senseless acts of violence will stop.”

“Once again our nation is mourning the loss of lives in a mass shooting and this time it is eight of our own neighbors who were killed at the Indianapolis FedEx Ground center,” Archbishop Thompson said. “We pray for the victims and loved ones of those who were murdered as well as those who were injured.”

The facility is near the Indianapolis International Airport and the shooting took place the night of April 15. CNN quoted a police official as saying law enforcement arrived to “a very chaotic scene, with victims and witnesses running everywhere.” 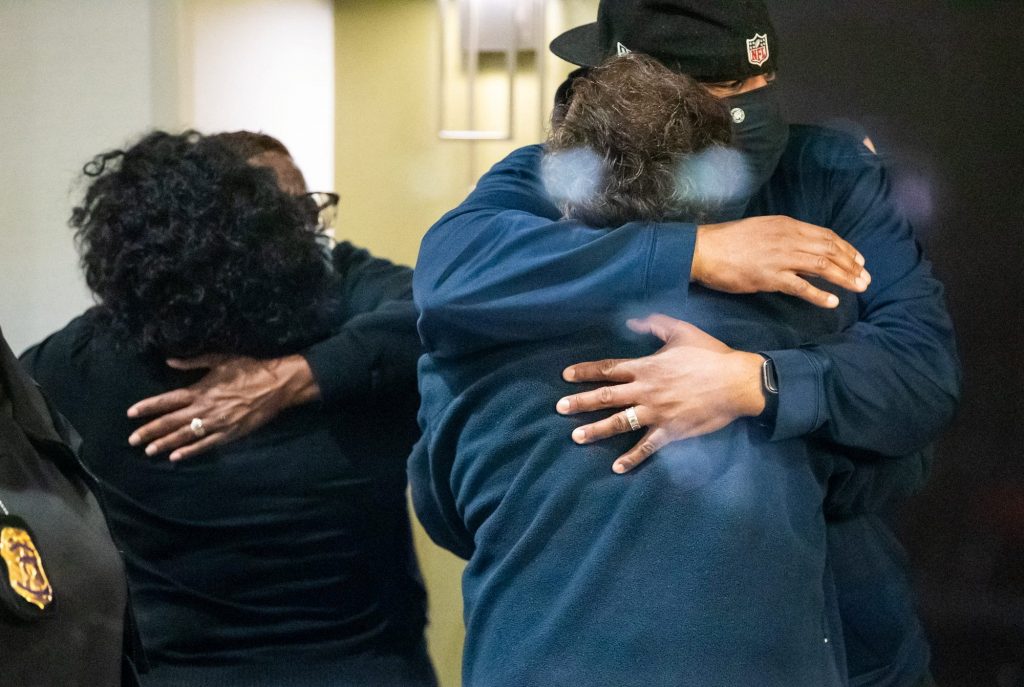 People embrace after learning their loved one was safe after a mass casualty shooting at the FedEx facility in Indianapolis April 16, 2021. Eight people died in the attack and several others were injured in the mass shooting. Afterward the gunman took his own life, according to police. (CNS photo/Mykal McEldowney, IndyStar via Reuters)

Eight people were killed and several others were wounded by a gunman who killed himself after his shooting spree. In a late afternoon story April 16, The Associated Press said the shooter had been identified as 19-year-old Brandon Scott Hole of Indiana, a former employee who last worked for the company in 2020.

“We again need prayer and concrete acts of charity for the families, and for all victims of violent crime, said Archbishop Paul S. Coakley of Oklahoma City, chairman of the U.S. bishops’ Committee on Domestic Justice and Human Development.

“Again and again, we react in horror to these violent acts, but many cannot agree on how to stop them,” he said in a statement issued late April 16. “In the spirit of Easter, let us pray for renewed reverence for the gift of life, and faith that by the grace of God, we can always begin again and work toward peace.”

Deputy Police Chief Craig McCartt told AP and CNN that witnesses said the gunman “got out of his car, and pretty quickly started some random shooting” in the parking lot then went inside the facility and continued shooting.

By the time police arrived, he had not gotten too far inside and “apparently killed himself shortly before police entered the building,” AP said.

According to April 19 news reports, the motive for the shooting was still being investigated. Hole was known to federal and local authorities, after his mother raised concerns about his mental state and said he had a potential for violence, according to three law enforcement sources familiar with the matter who spoke to CNN. However, Hole was able to buy two assault rifles legally.

“The U.S. Catholic bishops have long supported changes in the law to control the sale and use of firearms,” the Indianapolis archbishop said in his statement. “May we all recognize that we are made in the image and likeness of God and continue to do what we can to end this senseless violence and to live together in peace.”

Archbishop Coakley likewise said the U.S. bishops “continue to support a number of policy measures to try to reduce homicides and suicides.”

“In this Easter season, when we are reminded that there is always hope, even when we seem to be at a dead end, I would ask our political leaders, and all people of goodwill, once more to examine this issue and propose prudential solutions,” he said.

“It is good that President (Joe) Biden and some leaders in Congress are drawing renewed attention to this. For a comprehensive and long-lasting path to peace, it will take bipartisan cooperation,” Archbishop Coakley added.

Four of the eight who were killed were members of Indiana’s growing Sikh community.

About 75 people attended a vigil at Monument Circle in downtown Indianapolis the afternoon of April 18 while a similarly sized group gathered in the rain to pray at City Hall in nearby Beech Grove in the evening.