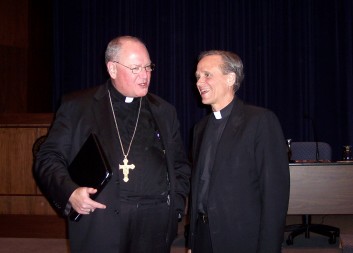 NOTRE DAME — Archbishop Timothy Dolan of New York spoke at the University of Notre Dame Dec. 6 to inaugurate the university’s Project on Human Dignity. The project is a new program of Notre Dame’s Institute for Church Life that will offer events to help define and defend the concept of human dignity.

Archbishop Dolan, who also serves as president of the United States Conference of Catholic Bishops, noted that when the faithful think of Catholic doctrines, they usually think of doctrines such as the Trinity, the Incarnation, the Redemption and the Eucharist.

“I wonder why we never include the Doctrine of the Dignity of the Human Person?” the archbishop asked. “It’s pivotal; it’s way up there; it’s normative. As the Catechism of the Catholic Church teaches, ‘Man alone is called to share, by knowledge and love, in God’s own life. … This is the fundamental reason for his dignity. Being in the image of God, the human individual possesses the dignity of a person, who is not just something, but someone.’”

He stressed that the doctrine of human dignity is a “central doctrine of our faith” and is so important that it should be taught children along with the Sign of the Cross and memorized the same way older generations memorized the “Baltimore Catechism.”

The doctrine of human dignity is in fact so central, he said, that it “cleanly fits in with the other core dogmas of our religion.” It mirrors the eternal love of the Trinity; it is shown in the Incarnation when God took on our nature; and it is proven by God’s Son dying to redeem us.

Archbishop Dolan noted that the human dignity doctrine may seem novel, but it has a long history: It gave rise to Christian morality with its emphasis on the protection of life, respect for the person, care for the vulnerable, defense of women, babies, children, family, elders and slaves. The doctrine also gave rise to the greatest system of healthcare, education and charity the world has ever known.

“The Church, which has as a primary doctrine the Dignity of the Human Person, is not a shrill, crabby, nay-saying nag, but a warm, tender, gracious mother who invites, embraces, and nurtures her children, calling forth from within the truth, beauty and goodness she knows is within them,” the archbishop observed.

If we truly believe the doctrine of human dignity, it would make a difference in how we live our lives and treat others, and it would be “life-saving,” he said.

“If we are ‘divinized,’ reflections of God, created in His image and likeness … then we ought to treat ourselves and others only with respect, love, honor, and care,” Archbishop Dolan said, noting that the “others” include everyone: the unborn, the immigrant, the person on death row, the homeless, the sinner.

However, he cautioned that this doctrine that gave rise to the “grand tradition of respect for human rights” also calls us to “duty and responsibility.” He cited Blessed Pope John Paul II, who said “Genuine freedom is the ability to do what we ought, not the license to do whatever we want.”

In the question-answer period following Archbishop Dolan’s lecture, an audience member cited a letter from Holy Cross Father John Jenkins, Notre Dame president, to Kathleen Sebelius, Secretary of Health and Human Services. That Sept. 28, 2011, letter urged that the definition of religious employer in the rules for the new healthcare law be broadened to provide conscience protection. Father Jenkins noted that the current rules put Notre Dame in the “impossible position” of being required either to provide services and insurance coverage contrary to Catholic teaching, or to discontinue employee and student health care plans.

The questioner said that non-Catholics also attend and work for Notre Dame who believe that contraception and sterilization are moral. He asked how this “conflict between two consciences” could be resolved without offending the equal human dignity of either side.

Archbishop Dolan replied that he was “grateful” Father Jenkins had taken a “brave and courageous stand” on this issue.

“Our religion would require us to respect the rights of all and never to denigrate them,” he said. “However, it would also obviously require us to obey our own consciences and follow the allegiances of our own faith.”

With a “defined community” that stands for a given set of values, people expect that community to live out the demands of the faith it professes, Archbishop Dolan explained. So, it is not a judgment against people who do not share the faith, but rather an insistence on the rights of conscience and insistence that the government would never have the right to compel violation of conscience.

“That of course is not only a Catholic principle,” Archbishop Dolan said, but also a principle of our country. So, while Father Jenkins is making a religions claim, “He also is calling America back to its most cherished principles that never would we force someone or an institution to do something contrary to its conscience.”

Another audience member asked Archbishop Dolan for concrete ways to affirm human dignity. The archbishop passed along advice he heard from Pope Paul VI when he was a seminarian in Rome: When you see people, smile.

““When we try our best to radiate in a very simple, practical way a smile, an openness, a nod of greeting, we do two things: First, We acknowledge the dignity in the other person, and secondly we say ‘We as well have that and have something to give.’”

This acknowledgement is like the new response in Mass to “The Lord be with you,” when we say “And with your spirit,” he continued.“We are acknowledging in the other person that the spirit is there, the hint of God, the trace of God, the icon; and we look at that and smile, and that just speaks volumes.”