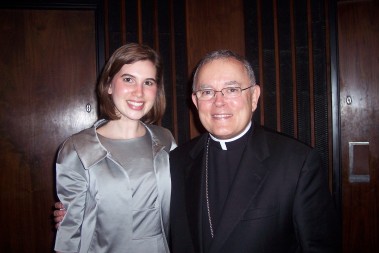 NOTRE DAME — Why is there so much disunity among Catholics on the question of Catholics in political life standing clearly with the Church on major moral issues like abortion? When Archbishop Charles J. Chaput of Denver was asked that question after his April 8 keynote address for the University of Notre Dame Right to Life Club’s spring lecture series, he was quite frank:
“The reason … is that there is no unity among the bishops about it,” Archbishop Chaput responded. “There is unity among the bishops about abortion always being wrong, and that you can’t be a Catholic and be in favor of abortion — the bishops all agree to that — but there’s just an inability among the bishops together to speak clearly on this matter and even to say that if you’re Catholic and you’re pro-choice, you can’t receive Holy Communion.”

Individual bishops probably do take such a stand privately more often than anyone knows, the archbishop noted, and he said he is not in favor of refusing Communion without giving private notice ahead of time to the person. He emphasized, however, that pro-choice Catholics should be told that they will not be given Communion, and not to present themselves to receive.

Archbishop Chaput said that he and others have been trying to move the bishops’ conference to speak clearly on this issue for a number of years. However, there is a fear, he said, that if they do so, the bishops might somehow disenfranchise the Catholic community from political life, making it difficult to get elected if a Catholic politician has to hold the Church’s position on issues like abortion and gay marriage.

This strategy clearly has failed, he continued, “So let’s try something different and see if it works. Let’s be very, very clear on these matters,” and he asked the audience to “Help me to convince the bishops on that subject.”

Archbishop Chaput himself has been very clear on the topic of Catholics in public life, setting forth much of his philosophy in his book “Render Unto Caesar: Serving the Nation by Living our Catholic Beliefs in Political Life” (Doubleday Religion), which came out shortly before the presidential election of 2008. In that book, he urged Catholics to use the faith as the foundation for renewing American society in the 21st century.

The title of his April 8 keynote at Notre Dame, “Politics and the devil: Living in a world of unbelief,” touched on many of the topics in his book.

“There is no such thing as morally neutral legislation or morally neutral public policy,” Archbishop Chaput told the audience. “Every law is the public expression of what somebody thinks we ought to do. The question that matters is this: Which moral convictions of which somebodies are going to shape our country’s political and cultural future?”

The answer is obvious, Archbishop Chaput continued: “If you and I as citizens don’t do the shaping, then somebody else will. That is the nature of a democracy. A healthy democracy depends upon people of conviction working hard to advance their ideas in the public square respectfully and peacefully, but vigorously and without apologies.”

Most people root their moral convictions in their religious beliefs, he explained, for what we believe about God shapes what we think about the nature of the human person and our idea of a just society. And if a citizen fails to bring his moral beliefs into our country’s political conversation and work for them publicly and energetically, he said, the defeat of his own beliefs will be insured.

The idea that the separation of church and state should force us to exclude our religious beliefs from guiding our political behavior makes no sense at all, he continued:
“If we don’t remain true in our public actions to what we claim to believe in our personal lives, then we only deceive ourselves, because God certainly isn’t fooled: He sees who and what we are. God sees that our duplicity is really a kind of cowardice, and our lack of courage does a lot more damage than simply wounding our own integrity; it also saps the courage of other good people who really do try to publicly witness what they believe. And that compounds the sin of dishonesty and the sin of injustice.”

Archbishop Chaput said that the moral and political struggle today in defending human dignity is becoming more complex. “Abortion is the foundational human rights issue of our lifetime,” he said, adding that “You can’t build a just society and at the same time legally sanctify the destruction of generations of unborn human life.”

Working to end abortion doesn’t absolve us from our obligation to serve the poor, disabled, elderly or immigrants, he hastened to add, “But none of these other duties can obscure the fact that no human rights are secure if the right to life is not.”

The archbishop told the students that nothing we do to defend the human person, no matter how small, is ever unfruitful or forgotten. Such actions touch lives and move hearts in ways one can never fully understand, he said. He urged the audience not to underestimate the beauty and power of the witness they give in pro-life work, saying that he came to Notre Dame to encourage the students, but also to draw friendship and strength from them.

“God loves ordinary, everyday people who keep God’s word and stay faithful to His commandments and sustain the life of the world by living in it with your own goodness,” Archbishop Chaput said. “That’s the work you’re called to do, no matter where God leads you after Notre Dame. … If you speak up for the unborn child in this life, someone will speak up for you in the next, when we meet God face-to-face.

“ … Virtue does matter. Courage and humility, justice and perseverance do have power. Good does matter, and the sanctity of human life will endure. It will endure because young men and women — like yourselves and those of us who are older — remember that if God so loved the world that He gave His only Son, then the odds look pretty good, and it’s worth fighting for what’s right.”

Archbishop Chaput delighted South Bend people in the audience by telling them that he felt at home in the city because his great, great, great, grandfather was Pierre Navarre, the first white settler to permanently settle in what is now South Bend. Navarre married a Potawatomi woman named Angelique, and their children were baptized by Father Stephen Badin — the first Catholic priest to be ordained in the United States — and by Holy Cross Father Edward Sorin, founder of Notre Dame. As a member of the Prairie Band Potawatomi Tribe, Archbishop Chaput is the first Native American archbishop.