Except for, perhaps, those living out vocations in the Roman Catholic Church or who work in the administration of a diocese, ecclesial and parochial terminology can be confusing.

Ecclesial language is used with precision, including the various titles given to priests who serve in parishes or for the diocese. Often, the name given to a diocesan priest’s assignment is really a job description, indicating the type of service he has been asked by the episcopal authority — the bishop — to perform at that parish or for the diocese.

Within the Diocese of Fort Wayne-South Bend, some of the assignments Bishop Kevin C. Rhoades has given to a member of the presbyterate – the priests of the diocese – include vicar general, episcopal vicar, pastor, parochial vicar and administrator. Each of these assignments have in common the mandate of Jesus to teach, sanctify and lead the people entrusted to their care. The goal of all pastoral ministry is the salvation of souls: All priests strive to carry out their ministry after the likeness of the great high priest, Jesus Christ.

In accordance with Can. 475 §1-2, in each diocese the bishop must appoint a vicar general who is provided with the powers of the ordinary, the bishop, according to the norms of canon law. The vicar general assists the bishop in the governance of the whole diocese. As a rule, one vicar general is to be appointed, unless the size of the diocese, the number of inhabitants or other exigent pastoral reason exists.

By virtue of office, the vicar general has the same executive power belonging to the diocesan bishop by law — namely, the power to place all administrative acts except those which the bishop has specifically reserved to himself, or which require a special mandate of the bishop by law. (Can. 479 §1)

The vicar general — always a priest — serves at the pleasure of the bishop who appointed him, so there’s no set term, said vicar general Father Mark Gurtner. If the appointing bishop is transferred to another diocese or passes away, then the vicar general’s duties cease as well.

“It’s work that’s necessary and is done in service of our diocese,” said Father Gurtner. “That’s the part, for me, that is fulfilling. I know I’m doing work that is very necessary for the diocese and very helpful for Bishop Rhoades, I hope.”

As of July 1, Bishop Rhoades has appointed — for the first time in recent diocesan history — a vicar for clergy, Father Matthew Coonan. According to Can. 476, a diocesan bishop can appoint one or more episcopal vicars when the “correct governance of a diocese requires it.”

Episcopal vicars manage a specific part of the diocese, a certain type of affairs in the diocese or are over the faithful of a specific rite or over certain groups of persons. Over their specific affair, rite or group, they possess the same ordinary power as a vicar general. 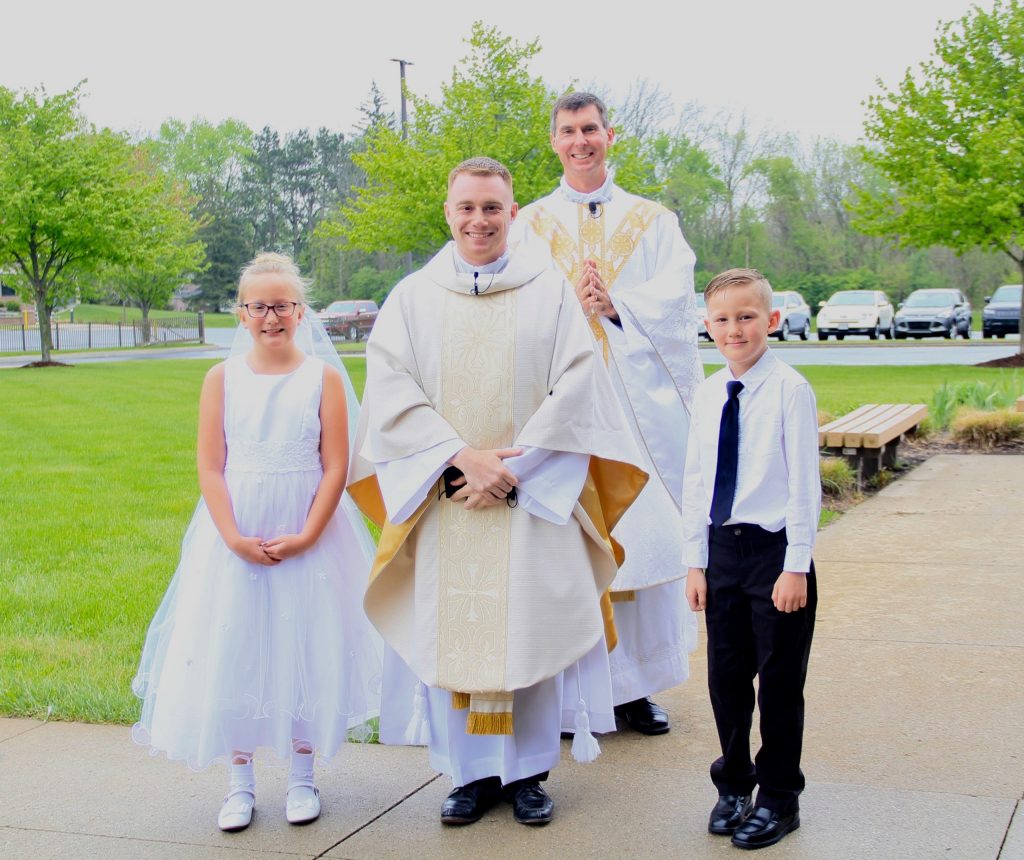 File photo
Father Daniel Scheidt, in back, and Father Jay Horning celebrate with first communicants after a Mass at St. Vincent de Paul Parish, Fort Wayne. Father Scheidt is pastor of the parish: Father Horning is a parochial vicar, which is a priest assigned to assist in the pastoral duties of a parish under the authority of the pastor.

As stated in Can. 519, the pastor of a parish assigned to him, exercises “the pastoral care of the community committed to him under the authority of the diocesan bishop in whose ministry of Christ he has been called to share, so that for that same community he carries out the functions of teaching, sanctifying, and governing, also with the cooperation of other presbyters or deacons and with the assistance of lay members of the Christian faithful, according to the norm of law.”

A parochial vicar is a priest who is assigned to assist a pastor in the pastoral ministry of the parish. Prior to 1983 and the promulgation of the most recent Code of Canon Law, this position was called the “associate pastor” or “assistant pastor,” as both are priests in good standing who are given the responsibility to pastor a parish.

A parochial vicar can be assigned either to assist in exercising the entire pastoral ministry of the whole parish, a determined part of the parish, a certain group of the Christian faithful of the parish, or even to assist in fulfilling a specific ministry in different parishes that are engaged with each other in that ministry.

The obligations and rights of a parochial vicar, besides being defined in canon law, diocesan statutes and the letter of the diocesan bishop to the parochial vicar, are more specifically determined in the mandate of the pastor.

Unless the letter of the diocesan bishop expressly provides otherwise, a parochial vicar, within the norms of canon law, substitutes for the pastor at pastoral functions when the pastor cannot be present. 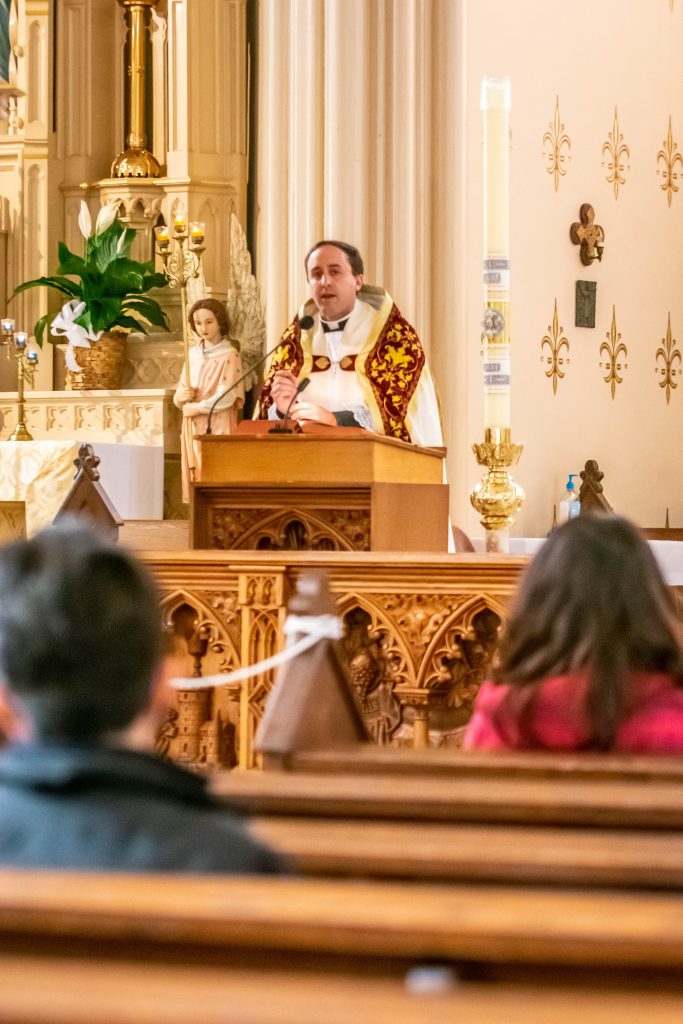 When a parish is “vacant,” meaning that the pastor has retired, been transferred to another assignment or is incapable of exercising his duties as a pastor, the bishop may choose to facilitate the appointment of a new pastor by first appointing a temporary parochial administrator. For example, an administrator may be appointed to assist at a parish at which the current pastor has a long-term illness or is facing a long-term recovery, at a parish to which the bishop’s intended new appointment as pastor is delayed in being able to transfer to the parish, or in any number of situations in which immediately appointing a new pastor is not possible or desirable. In general, an administrator has the same duties and scope of authority as a pastor; however, these may be limited by the bishop.