VATICAN CITY (CNS) — The Apostleship of the Sea is celebrating its 100th anniversary and changing its name to “Stella Maris,” the Latin title of Mary, Star of the Sea, and the name by which most of the Catholic centers for seafarers are known.

As the maritime industry is struggling with the impact of COVID-19 and hundreds of thousands of sailors are stuck on ships, the men and women who staff and volunteer as part of the Catholic Church’s Stella Maris outreach must “be inventive and find new ways to be present on the docks and be a church that sails with the people of the sea,” said Father Bruno Ciceri, the Vatican-based international director of Stella Maris. 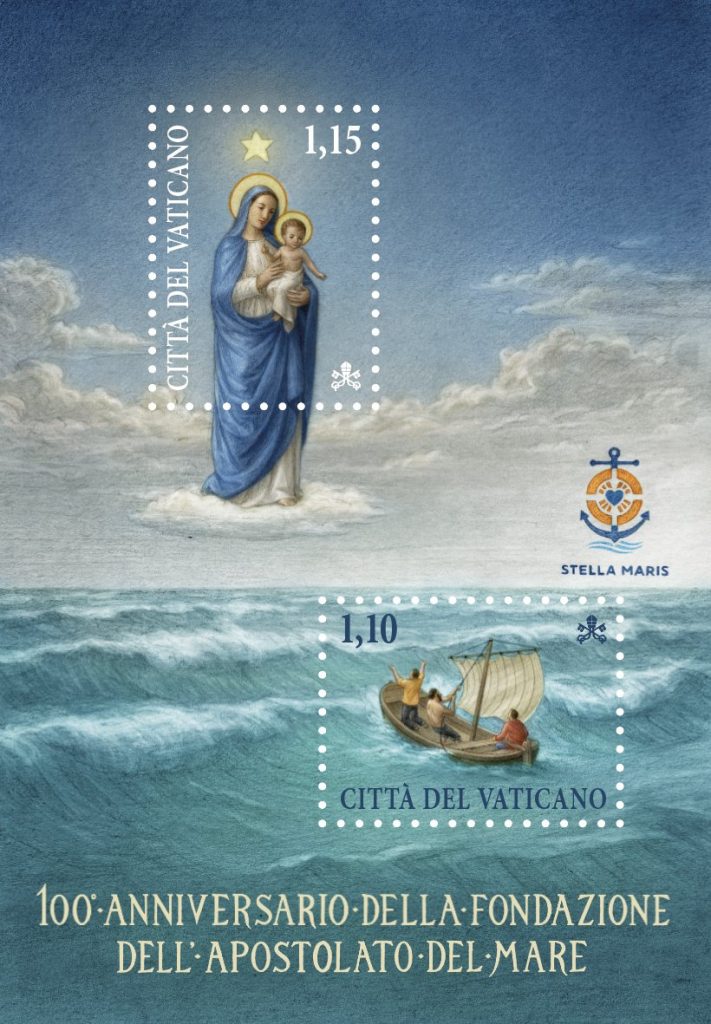 A Vatican postage stamp celebrates the 100th anniversary of the Apostleship of the Sea, a pastoral ministry for fishermen and those who work at sea. The Vatican announced the organization will be officially known as “Stella Maris” (Star of the Sea), which is a Marian title. (CNS photo/Vatican stamp and coin office)

The Vatican announced the name change and released a new logo for the organization Sept. 28.

According to a press briefing Sept. 25 by the U.N. International Maritime Organization, COVID-19 travel restrictions and quarantines mean some 400,000 seafarers across the globe are stuck at sea or in an endless quarantine on ships in port and have been for months. And the 400,000 seafarers who normally would replace them have been left without jobs.

“Let us use this opportunity as we assume the name Stella Maris and refresh our logo to similarly renew and refresh our ministry to seafarers, fishers and their families,” Father Ciceri wrote in a letter Sept. 24 to the 230 chaplains and thousands of volunteers who staff Stella Maris centers and reach out to sailors in more than 300 ports in 41 countries. In pre-COVID-19 times, they would visit 70,000 ships each year and interact with more than 1 million seafarers.

Before the COVID-19 pandemic, members of the Stella Maris apostolate planned to meet Oct. 4 in Glasgow, Scotland, where the ministry began in 1920, for a congress and a 100th anniversary Mass.

In a letter encouraging local celebrations instead, Cardinal Peter Turkson, prefect of the Dicastery for Promoting Integral Human Development, told members of the apostolate, “We are called to be open to the Spirit of renewal and find new ways and means to be the church sailing with the people of the sea.”

Change is nothing new, especially for those working with seafarers, he said.

“Throughout the years, the maritime industry has changed enormously with the building of new larger and computerized ships, manned by smaller multinational, multicultural and multireligious crew, docking in ports far away from cities. These circumstances together with piracy, criminalization, abandonment and lastly the COVID-19 have increased the stress, the fatigue and the isolation of the crew.

“One of the distinctive characteristics of the work done by the pioneers of the Stella Maris was ships’ visits carried out with dedication and enthusiasm, first along the banks of the River Clyde and after according to the development of the apostolate all over the world,” the cardinal said.

“Since then, the structures and designs of the ports have changed but not the needs of the seafarers and fishers, who every time they dock are yearning to contact their families, to seek advice for a contractual problems or simply would like to talk,” he said. “Because of the many restrictions imposed by the COVID-19 pandemic, our practical way of ministering has changed dramatically, but what should not change is the substance of our service that is a ‘ministry of presence.’ Let us make use of all the instruments that the technology offers us to be present in the lives of the people of the sea offering friendship, support, encouragement and continuous prayers.”