While there are dozens of parishes in the Diocese of Fort Wayne-South Bend, many Catholics only frequent their home parish to celebrate Mass and partake in the sacraments. A centuries-old Holy Thursday devotion, however, challenges people to visit seven churches in a single evening.

After the celebration of the Mass of the Lord’s Supper on Holy Thursday, April 14, priests will place the Eucharist on the altar of repose for adorers to praise and keep watch, as Jesus asked his disciples to do in the Garden of Gethsemane. Many Catholics within the diocese will travel to seven local parishes to keep watch with Christ as part of this annual international tradition.

The instructions for this pilgrimage are simple: Visit seven churches during Thursday evening’s Eucharistic watch to pay homage to the Lord. Parishes will have Eucharistic Adoration after the conclusion of Mass – prospective participants just need to map out their desired route between parishes.

This long-standing tradition, known colloquially as “church hopping,” also affords Catholics the opportunity to visit other parishes in the diocese that they may not have otherwise attended. As they adore the Lord, they can take advantage of the variety of beautiful architecture and religious art to recall Christ’s passion, glory, and resurrection in preparation for the upcoming Easter season. 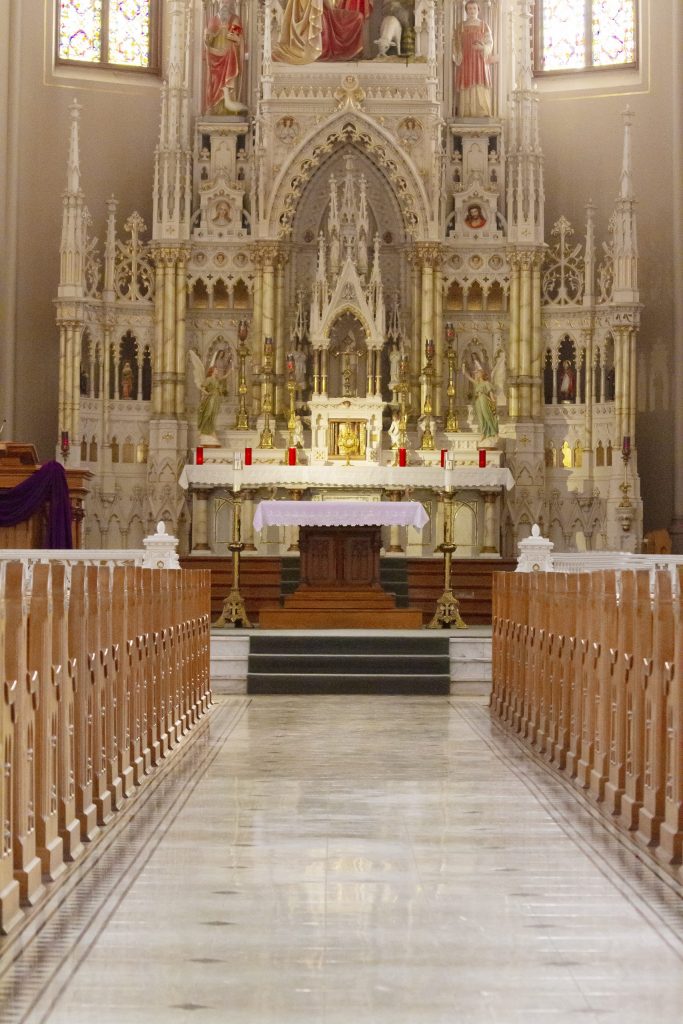 Shawn Witchey has participated in the tradition twice, and says that visiting different churches – especially those with cultures that contrast with his home parish – remains a high point for him during the yearly pilgrimage. Witnessing prayer in other languages, Witchey says, was one of the best parts in his experience with church hopping. “It just opens up so much more exploration of the faith and how people do things.”

Witchey says that he also mentions this idea of exploration to prospective pilgrims, emphasizing that Holy Thursday offers a prime opportunity to do so. “It’s not something that most people get to do very often, to visit other churches.”

The start of this tradition is often attributed to St. Philip Neri, who lived in the mid-16th century. St. Philip Neri and his companions initiated the pilgrimage as a counter to the “party atmosphere” that lingered after the pre-Lent Carnival season, according to The Compass News, the newspaper from the Diocese of Green Bay in Wisconsin. The Penn State Newman Community website states that pilgrims would prayerfully travel to the seven churches of Rome on the initial outset of this tradition, which is likely the origin of the tradition’s numeric specifications. The number seven also has particular significance in scripture as a symbol of “perfection” or “completion.”

Some Catholics utilize a list of stations and scriptural readings to amplify the solemn meaning of their Holy Thursday pilgrimage. These seven stations recall the seven locations that Christ visited between his arrest after the Last Supper and subsequent death on Good Friday.

The Eucharistic watch on Holy Thursday recalls a particular aspect of Scripture as well. In the Gospels, Jesus asks his disciples to keep watch with him in the Garden of Gethsemane. In a similar way, modern disciples of Christ keep watch in anticipation of the remembrance of Jesus’ impending passion and death.

Matthew wrote in his Gospel: “Then Jesus came with them to a place called Gethsemane, and he said to his disciples, ‘Sit here while I go over there and pray.’ He took along Peter and the two sons of Zebedee, and began to feel sorrow and distress.”

Parishes in the Diocese of Fort Wayne-South Bend will emulate this eucharistic watch, with parishioners filling the role of the disciples, “keeping watch” for varying durations. Prospective pilgrims should check with the seven parishes they wish to visit for specific adoration times. Those who feel as though travel may not be possible or those looking a different devotion in which to partake that evening can check with their home parish to see if there is a Holy Hour yet to be filled during the night watch.

The Holy Thursday ‘church hopping’ tradition remains a solemn, powerful and exciting way to contemplate Christ’s passion, death and resurrection as the Church closes this season of Lent. Regardless of the individual parishes visited, no matter the local culture, the same Lord stands ready to greet all visitors in Eucharistic Adoration on the evening of Holy Thursday.