The scenario is familiar today: A young adult leaves home to pursue education or take a job in a place far from family and friends. Adapting to new surroundings, a new job and new people becomes overwhelming. He or she knows the Church is important, but how does one become part of a new faith community? 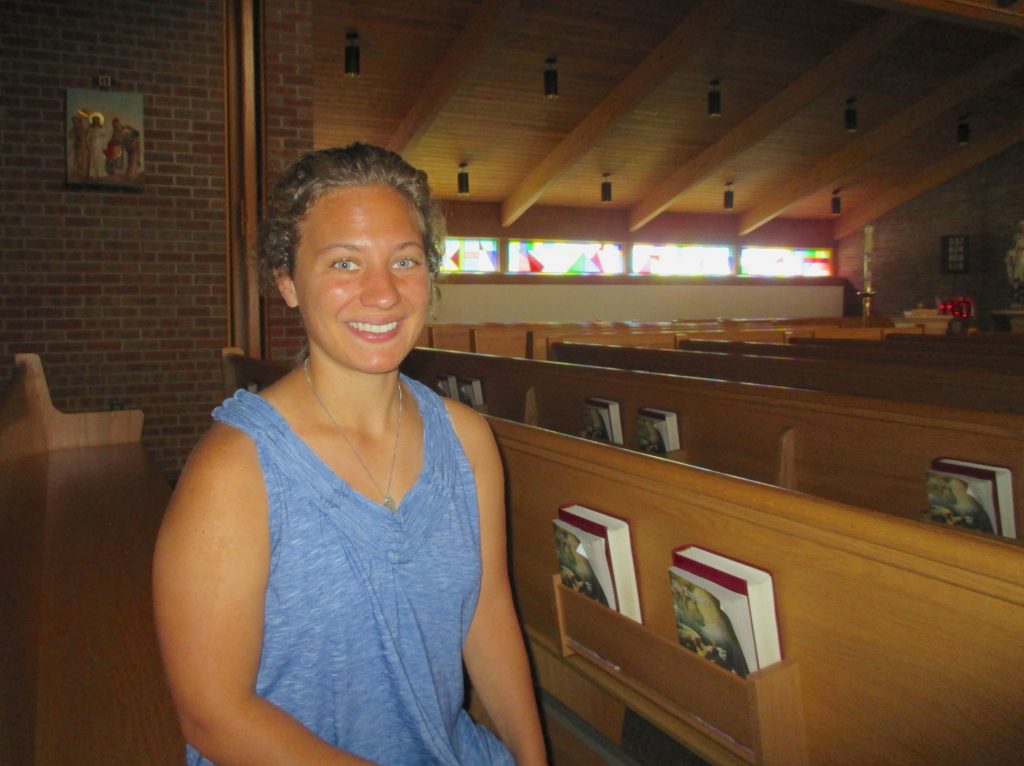 Aileen Hurd is a young adult in the Elkhart area who credits the Young Adult Ministry of the Diocese of Fort Wayne-South Bend for helping her grow personally and spiritually as she finished college and began her career.

Aileen Hurd of Elkhart knows all too well the feelings of dislocation and disassociation that all of that newness can bring.

“I grew up Catholic in a very involved family. I was an altar server. I went to Catholic school. I really loved my faith,” Hurd recalled.

After high school, she came to Indiana and studied for her undergraduate degree at Saint Mary’s College.

“My life in college was very disintegrated” at that time, she admitted. She struggled with mental health issues that surfaced in high school, after her parents’ divorce when she was in middle school.

Returning home to Connecticut after graduation, Hurd found herself trying to reconcile the disconnect between her life and the faith she had so loved.

She attended graduate school at Northeastern University in Boston, and there began a journey of healing that started her return to a deep faith. “I would go to St. Francis Chapel in downtown Boston for Mass and reconciliation and eucharistic adoration.” She sensed a new relationship with God unfolding.

Hurd completed her master’s degree in speech pathology and found a job back in Indiana with the Elkhart school district.

“I came here in 2014, and the first year was really difficult. My job was my whole life.” Although she became a parishioner at St. Thomas the Apostle Parish, Hurd wasn’t aware of activities and programs specifically for Catholic young adults. “But I was really grateful for the churches that had eucharistic adoration.”

When she finally came upon the programs offered in the Diocese of Fort Wayne-South Bend, one of her first significant experiences was during the group’s trip to Arise Encounter Milwaukee in November 2015. She remembers vividly the moment that she felt the urge to ask one of the keynote speakers to pray with her.
“It was a really significant day for me,” Hurd said. It not only was a landmark moment in her relationship with the Lord, it also brought her together with other young adults who valued their faith and were vibrant in their practice of it.

She also credits Sean Allen, diocesan director of Young Adult Ministry, with offering programs that help to enliven and nurture faith. Young adults are identified as men and women in their late teens, 20s and 30s, who are single, married, divorced or widowed. Some young adults have children; others do not. The young adult programs offered cover a broad range including service opportunities; Theology on Tap evenings; the Alpha program, which explores the Christian faith; a discipleship series; and retreats and pilgrimages such as the upcoming World Youth Day in Panama in January 2019. A group of diocesan young adults, including Hurd, also recently spent eight days walking the Camino de Santiago, a popular pilgrimage route in northern Spain.

“The Young Adult Ministry has been helpful to me in learning how to have relationships as an adult. Many of us are not married. We’re away from families,” Hurd said. “There is real suffering with loneliness that can stunt our growth.”

Young Adult Ministry is among the ministries funded by the Annual Bishop’s Appeal. Thirty percent of the more than $5 million projected as this year’s goal goes toward evangelization efforts that include not only Young Adult Ministry but Hispanic Ministry, the Black Catholic Congress, diocesan retreats and conferences, ministries to married couples, families and separated and divorced people, pro-life activities and communication tools such as Today’s Catholic, the diocesan news source.

To learn more about the activities and programs of Young Adult Ministry in the Diocese of Fort Wayne-South Bend, go to www.diocesefwsb.org/yam.