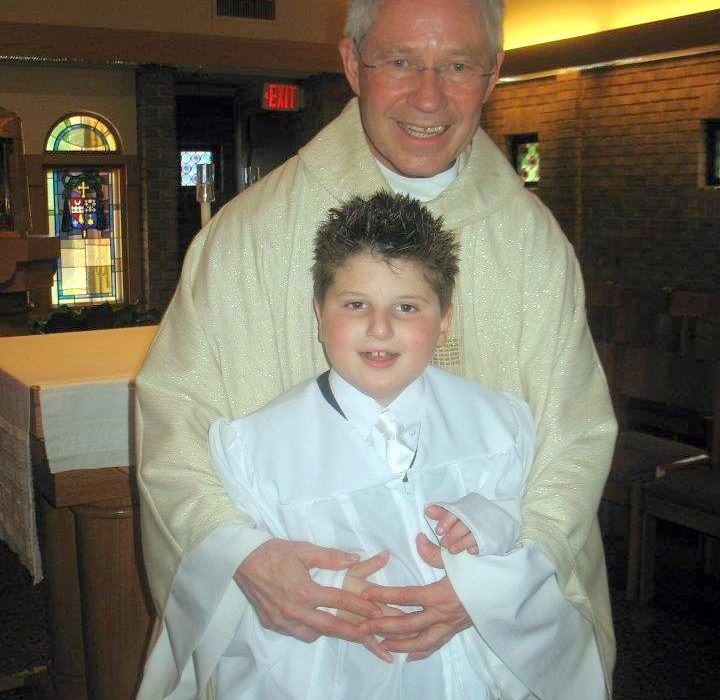 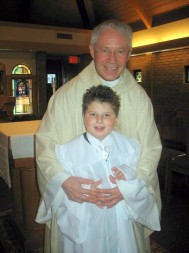 GRANGER — Mother Teresa said, “Every time you smile at someone, it is an action of love, a gift to that person, a beautiful thing.” John Russell Grover, known by family and friends as JR, has a smile and a laugh that give pleasure to all who encounter him.

Born on May 17, 2004, to St. Pius X parishioners John (JJ) and Marisa Grover, JR struggled to eat and sleep during the first two years of his life and was hospitalized several times in local hospitals. It was not until November of 2004 that neurologists at Riley Hospital in Indianapolis diagnosed JR’s condition as Angelman Syndrome.

Angelman Syndrome is a rare neurogenetic abnormality with symptoms such as severe cognitive delay, lack of speech and sleeping and feeding difficulties. Marisa remarks that the best part of Angelman Syndrome is the characteristics of excessive happiness and laughter.

While JR understands most of what his parents tell him, he has been unable to communicate verbally with those around him. Currently JR is learning sign language that has helped him express some of his needs.

Marisa looks forward to the time when she and JR will finally be able to verbalize the love they have for one another. “One of my most comforting thoughts is that when we both enter heaven we are going to have a conversation that will last for years! I know one day I will hear his sweet voice speaking to me and then I will know I am in heaven,” Marisa says.

One member of the Grover household that JR does not have difficulty communicating with is his 14-month-old brother Henry. “JR and Henry absolutely adore each other. It is like they have their own special unspoken language. They babble back and forth and it seems like they know what the other one is thinking,” beams Marisa.

JJ and Marisa credit the St. Pius X community and especially the pastor, Msgr Bill Schooler, for their support in meeting the challenges that accompany a child with special needs.

“My husband and I were both blessed to attend Christ Renews His Parish (CRHP) retreats at St. Pius,” Marisa remarks. “We met so many wonderful men and women through CRHP and they have prayed us through some of the most difficult times in our journey so far.”

Msgr. Schooler, who had a brother with Down syndrome, has been a source of comfort for the family while JR had been hospitalized and at the parish, Marisa emphasizes.

“Father Bill has been the ultimate example of a loving father to our family,” she says. “Each Sunday JR leaps out of his pew and runs up to give Father Bill a giant hug.”

She continues, “It makes us feel so at ease to know that we are in a parish where JR is fully accepted the way that he is. Father Bill has told us on many occasions that he doesn’t care if JR runs all around the church during Mass. He is one of God’s special children and has a special place in our church!”

The Children of St. Angela de Merci, a catechetical program at St. Pius, is designed for students with special needs or disabilities and has been an important influence in JR’s faith formation.

Teacher Maureen Hemmerling recalls the groundwork she and co-teacher Cathy Witucki developed for JR as he prepared for his First Communion.

“Knowing what his parents wanted to accomplish, we loosely planned what we wanted to do. We used picture cards, music and repetition with JR to accomplish goals that were set for him. I felt honored to be part of this experience and so proud of him as he received Communion for the first time,” says Hemmerling.

Because of the St. Angela de Merci program, the Grovers noticed a difference in JR’s demeanor at church.

“He loves to sit right in the front row and watch every step that our priest makes. He looks straight at the crucifix as if Jesus is talking directly to him. I believe that Jesus does talk to him because he is our angel on earth,” says Marisa.

One of the highlights of the last year for the Grover family was a private Mass for JR’s First Communion on May 19 in the parish chapel. Marisa recalls the event with appreciation, love and pride.

“JR was glowing with pride,” she says. “I think I could almost see a halo around his little head and I am sure there were wings under his white gown.”