Hundreds filled the nave of St. Peter’s Basilica, Vatican City, beneath Gian Lorenzo Bernini’s Altar of the Chair, one of the dominant features of the basilica, on Sept. 29. Here, Sam Anderson and Zane Langenbrunner, along with 21 of their classmates at the Pontifical North American College in Rome, were ordained to the diaconate by Bishop Austin A. Vetter of the Diocese of Helena, Montana, who had been invited to celebrate ordination. Bishop Vetter himself had been ordained to the diaconate in the same location, served for six years as Director of Spiritual Formation for the college, and even ordained his nephew to the diaconate that day. 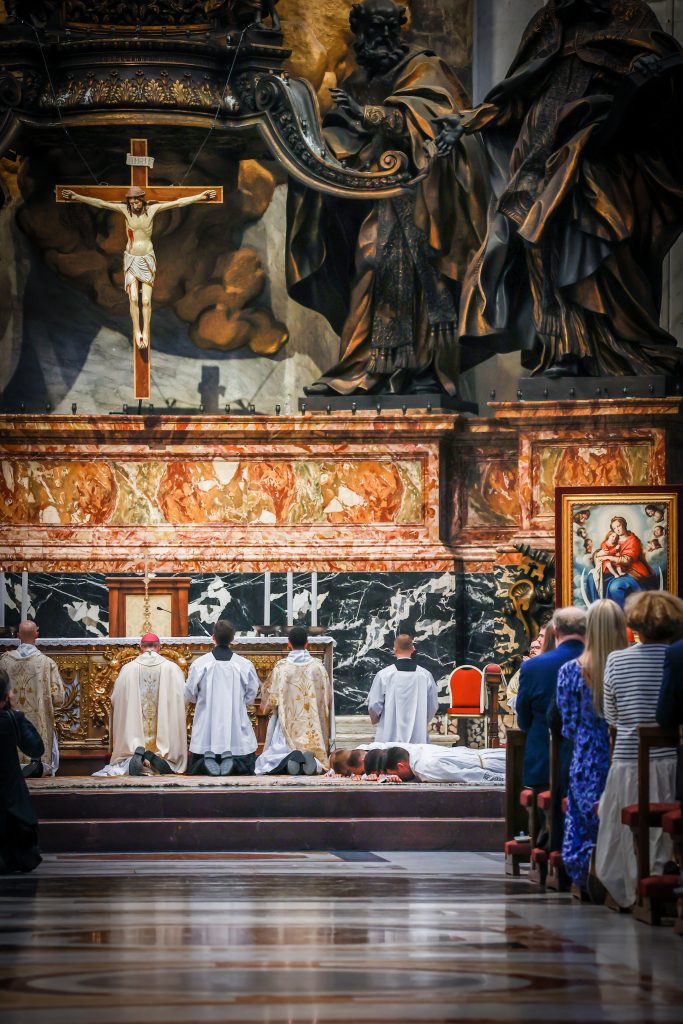 Jennifer Barton
Bishop Anthony A. Vetter of the Diocese of Helena, Montana, kneels below the Altar of the Chair in St. Peter’s Basilica, Vatican City, on Sept. 29 during the Litany of Supplication as he ordained 23 men from the Pontifical North American College to the diaconate, including Deacons Sam Anderson and Zane Langenbrunner.

Several priests and fellow seminarians of the Diocese of Fort Wayne-South Bend journeyed to Rome in support of their brothers and to witness the joyous occasion.

Held on the Feast of the Archangels, Bishop Vetter called upon the 23 deacon candidates to reflect on each of the three archangels’ missions in his homily: fighting against Satan, heralding the good news of Jesus Christ, and healing God’s people as Michael, Gabriel, and Raphael did.

He then told them: “Men, Jesus is alive, and in a very powerful way today, you’re proclaiming with your whole selves that you believe that and are willing to lay down your lives in humble service to Jesus and His Church. Get to work in God’s field, His vineyard. You have been waiting years for this day, so get to work.”

He then listed the three tools they would use to complete God’s work: obedience, life-giving celibacy, and prayer.

“Obedience to your bishop, and in doing this, you’re being obedient to the One Bishop, Jesus Christ Himself, not doing your own will, but the will of the One who sent you. Life-giving celibacy. If it’s not life-giving, men, you will be lifeless; bitter, boring, tired, lonely, and living in self-pity. Who wants that? And prayer. The Liturgy of the Hours, sanctifying all time to the Church and the entire world. … When we get to heaven, I think we’re going to be shocked at the difference our praying the breviary has meant to the world and for the world.”

Bishop Vetter also called them to go into the streets – the streets of which he spoke were the deacons’ college hallways – and to give themselves spiritually to those who walk the halls beside them every day. “It is a beautiful thing to be tired at the end of a day because of hard work. And no work should be beneath you.

“Finally, you’re a group of talented, happy, holy, healthy men with great gifts, but you’re also weak and broken, still in need of a savior, and you have one – the only one, Jesus Christ. … And you may know, too, that those archangels are on your side, the messengers of Jesus Christ who is indeed alive.” 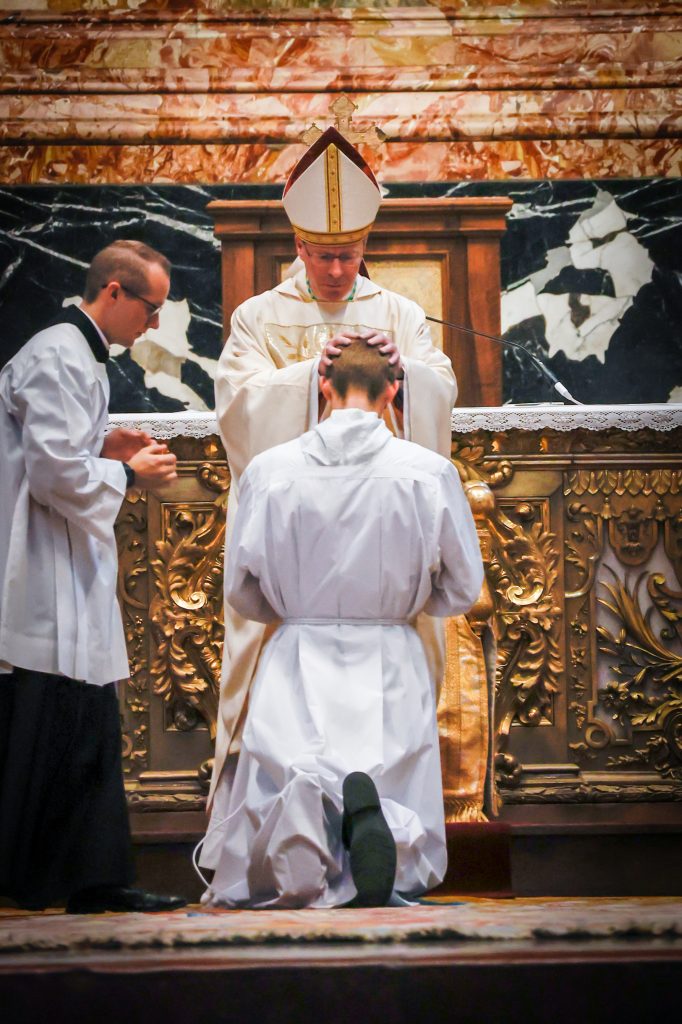 Bishop Anthony Vetter lays his hands on the heads of the two deacon candidates from the Diocese of Fort Wayne-South Bend. — Jennifer Barton 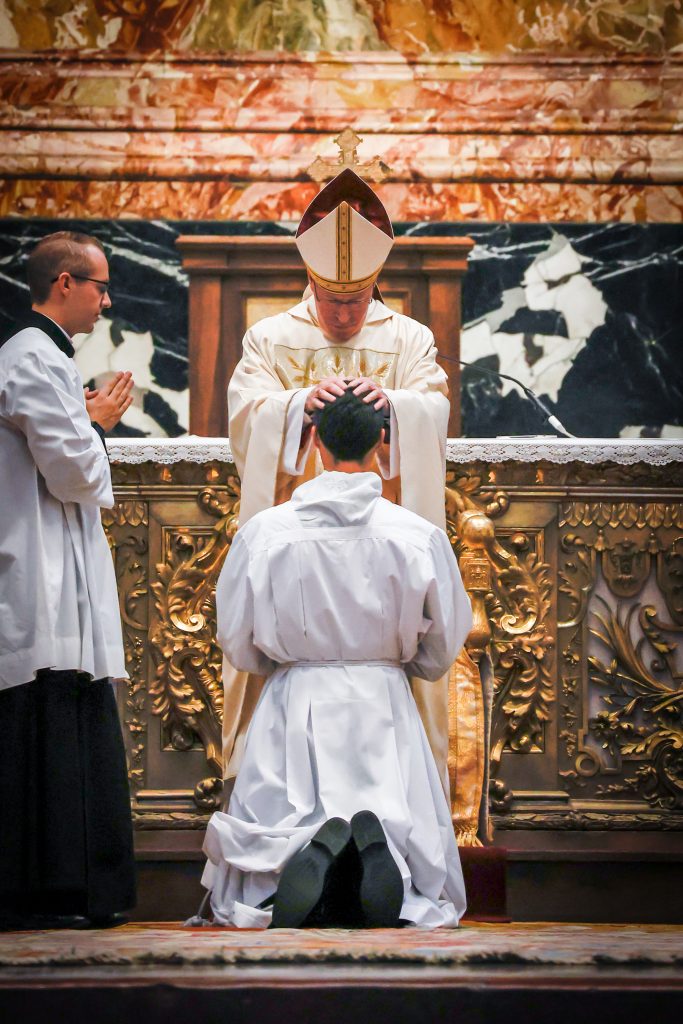 After the homily, candidates came forth one by one and professed their obedience to their respective bishops before laying prostrate in front of the altar as the all-men’s choir from the North American College sang the Litany of Supplication over them. After this, Bishop Vetter laid his hands on each candidate, saying the prayer of ordination, followed by the vesting of the new deacons. Deacon Jacob Schneider vested Deacon Anderson and Deacon Brian Florin vested Deacon Langenbrunner.

For both new deacons, it was a special honor to be ordained in the greatest of all churches in the Eternal City. Deacon Anderson called it “Truly a privilege, a special blessing, not only to be in a basilica of such historical and spiritual importance, surrounded by so many people who’ve made the trip, especially for this. It’s truly a beautiful, sacred space.” 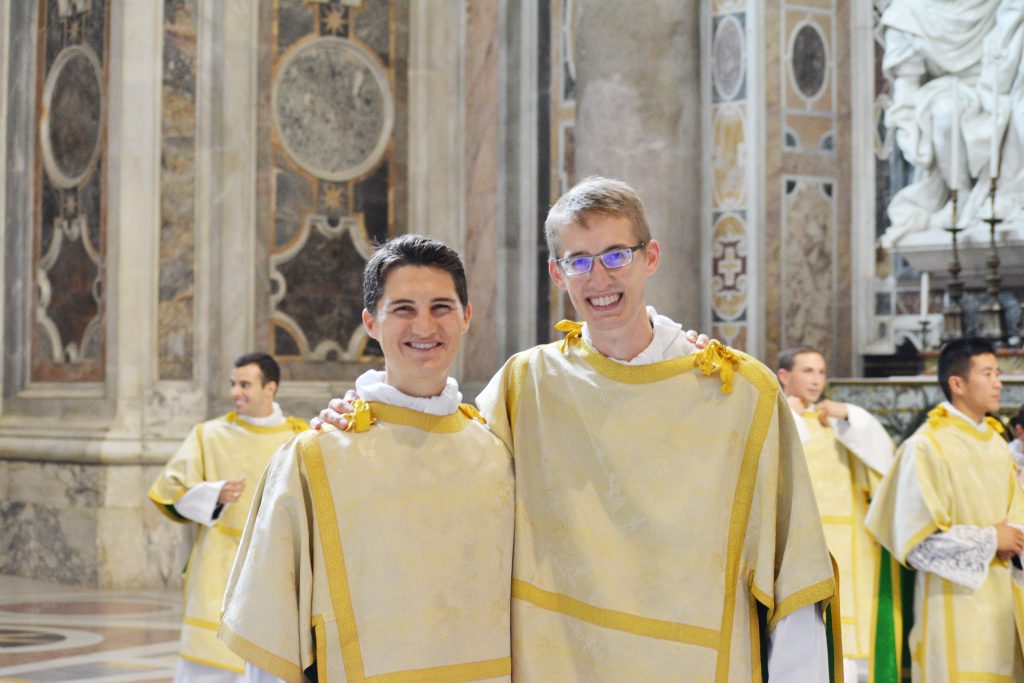 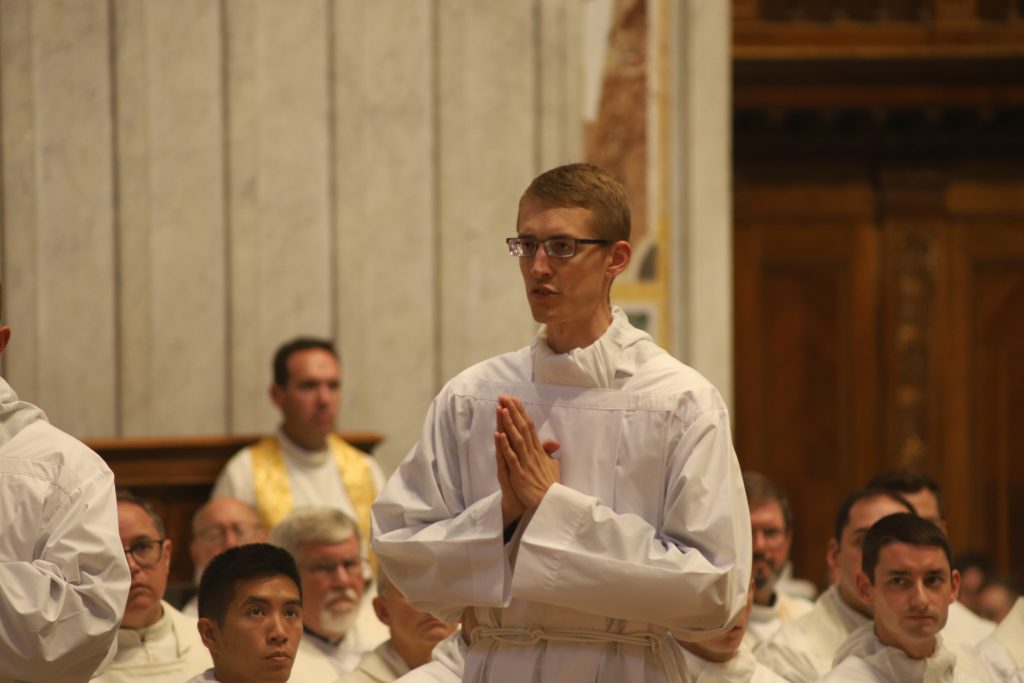 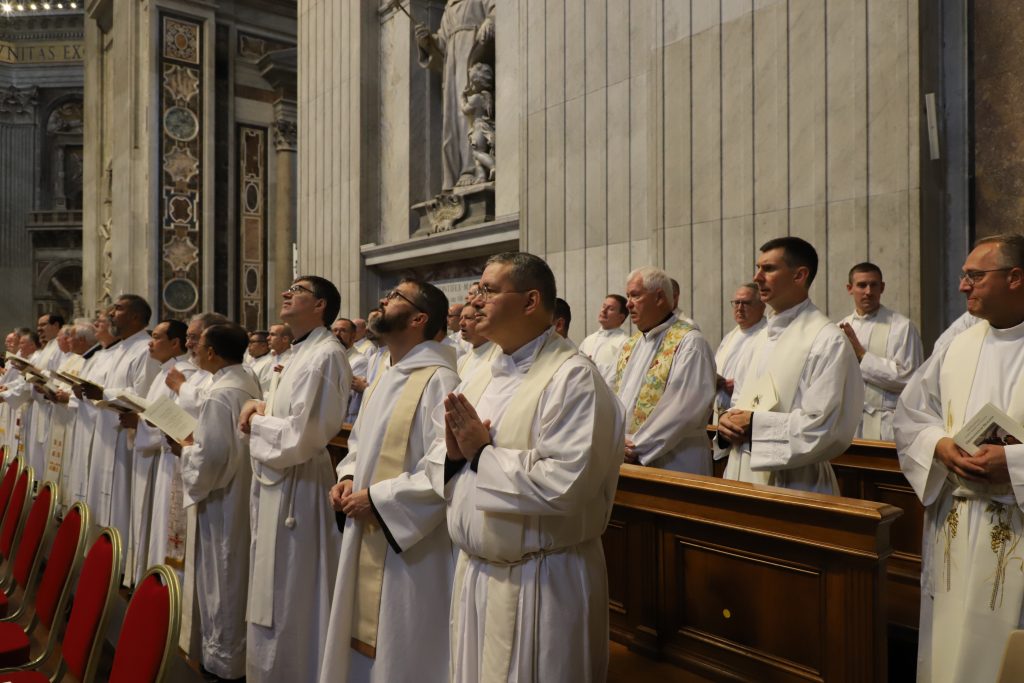 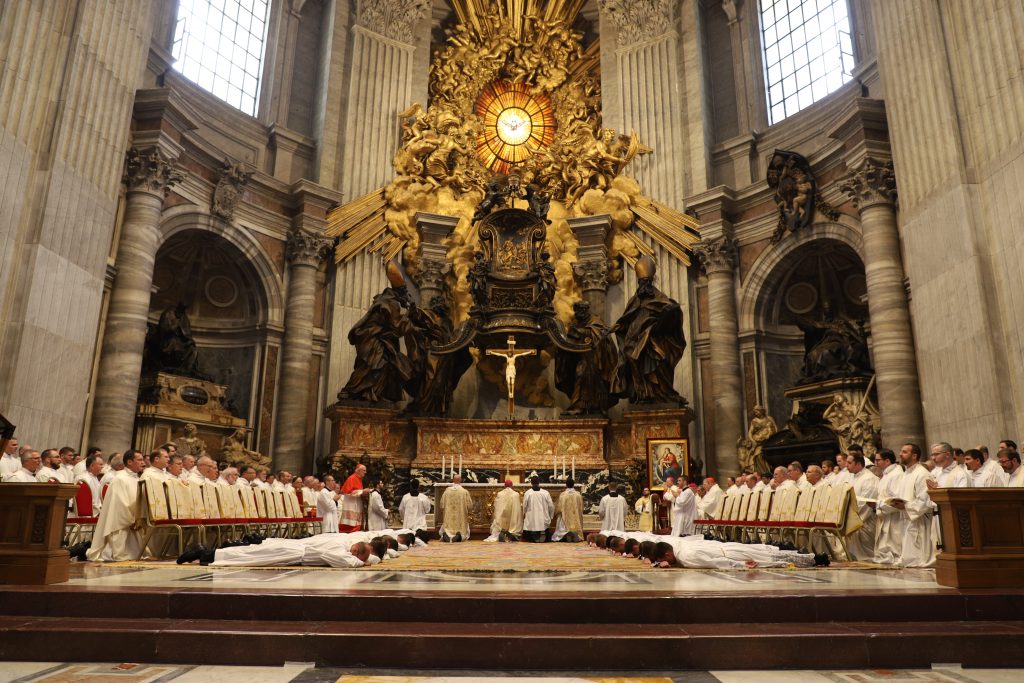 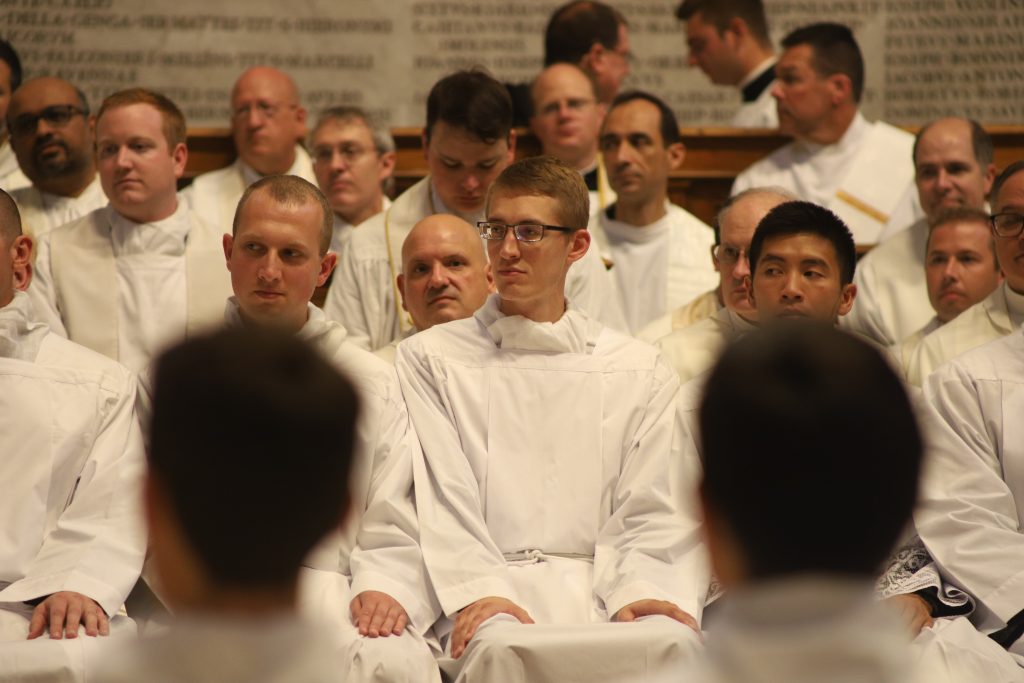 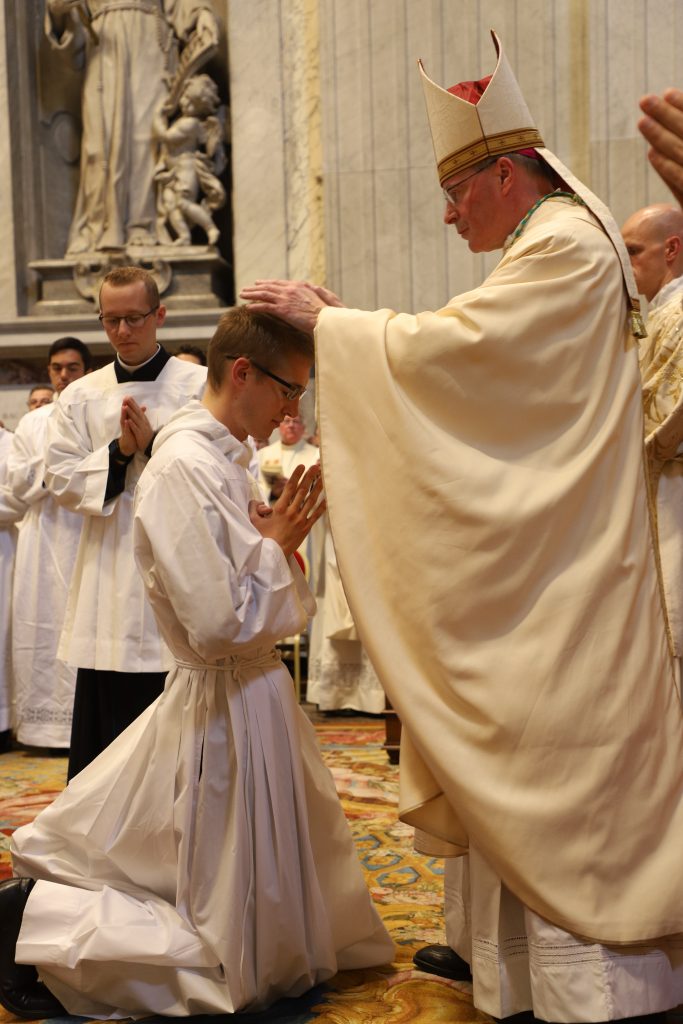 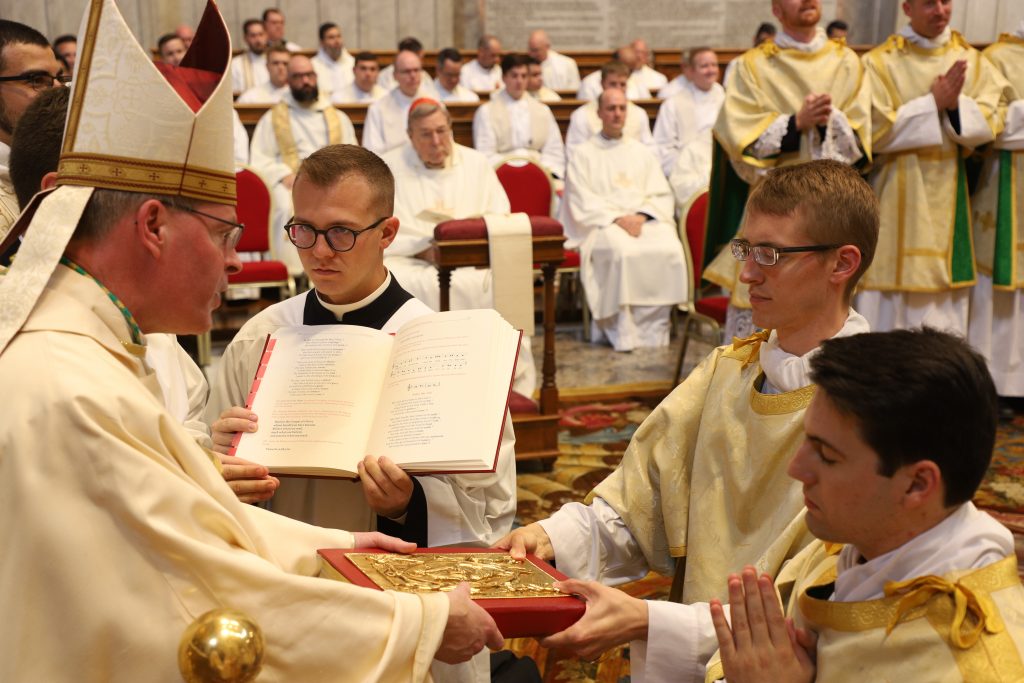 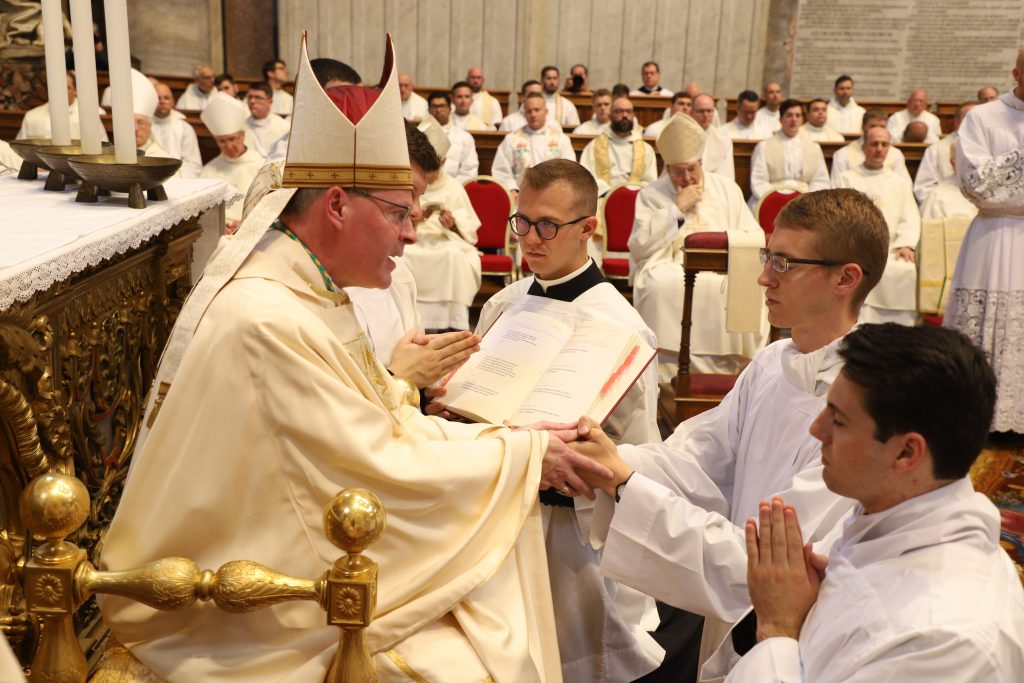 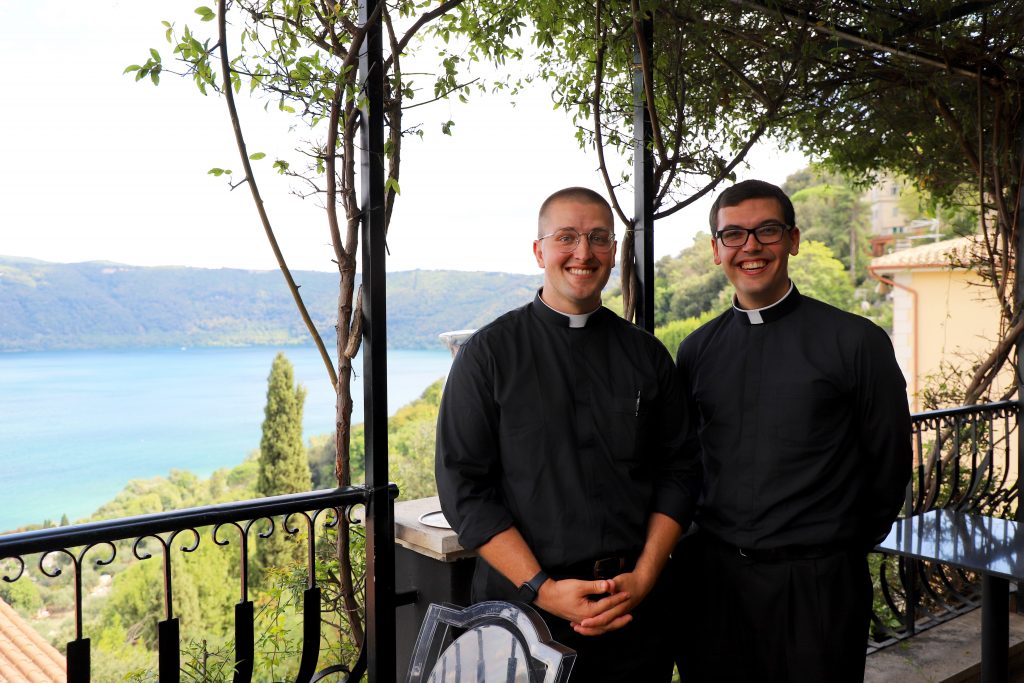 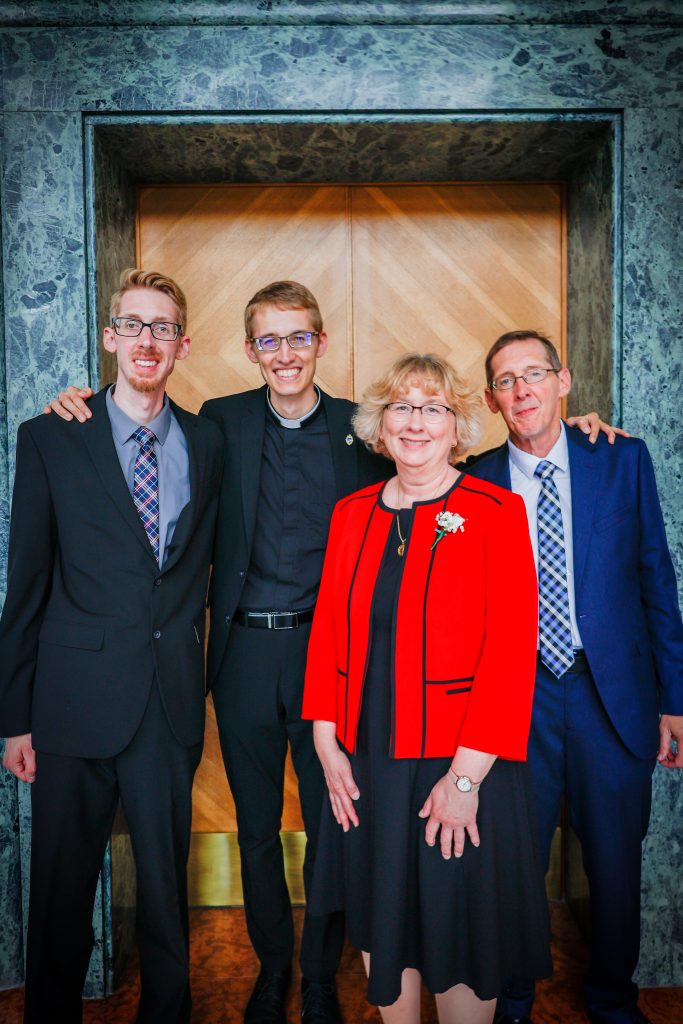 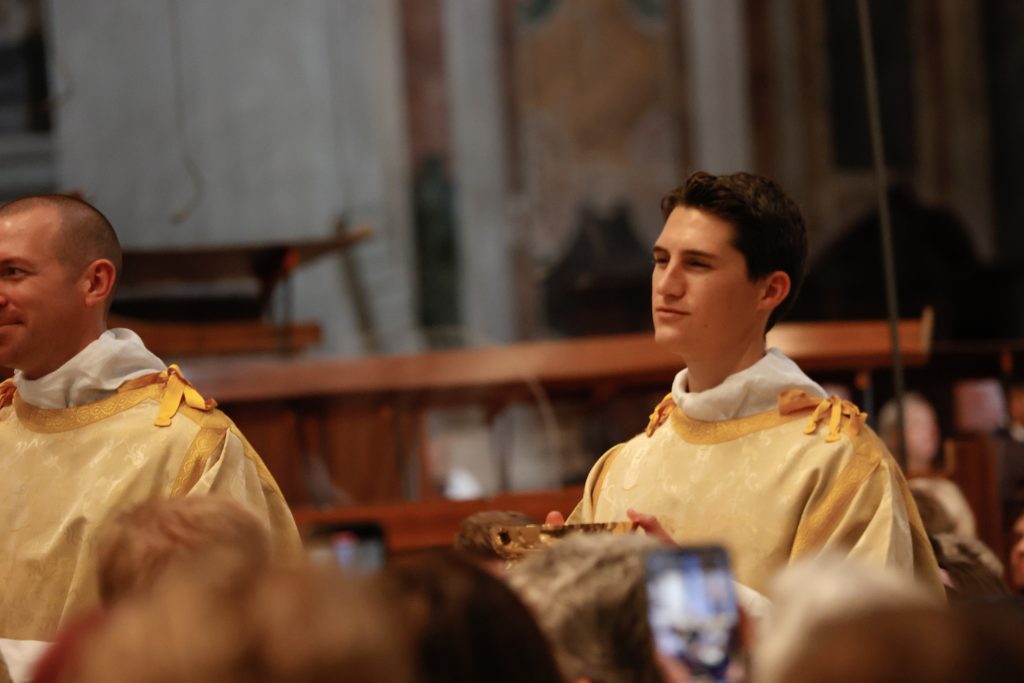 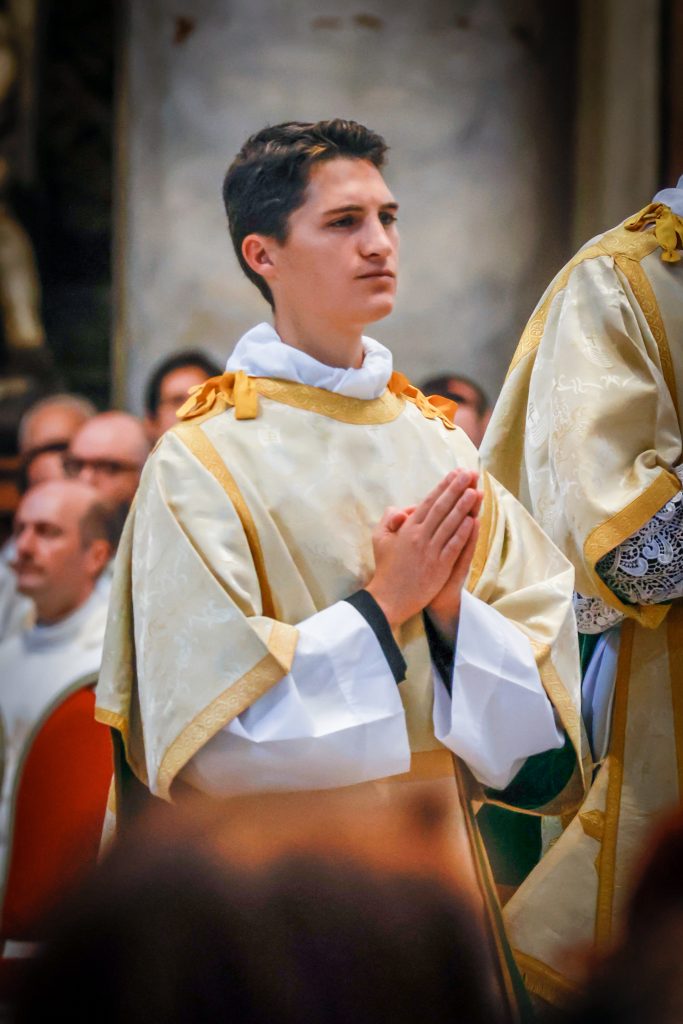 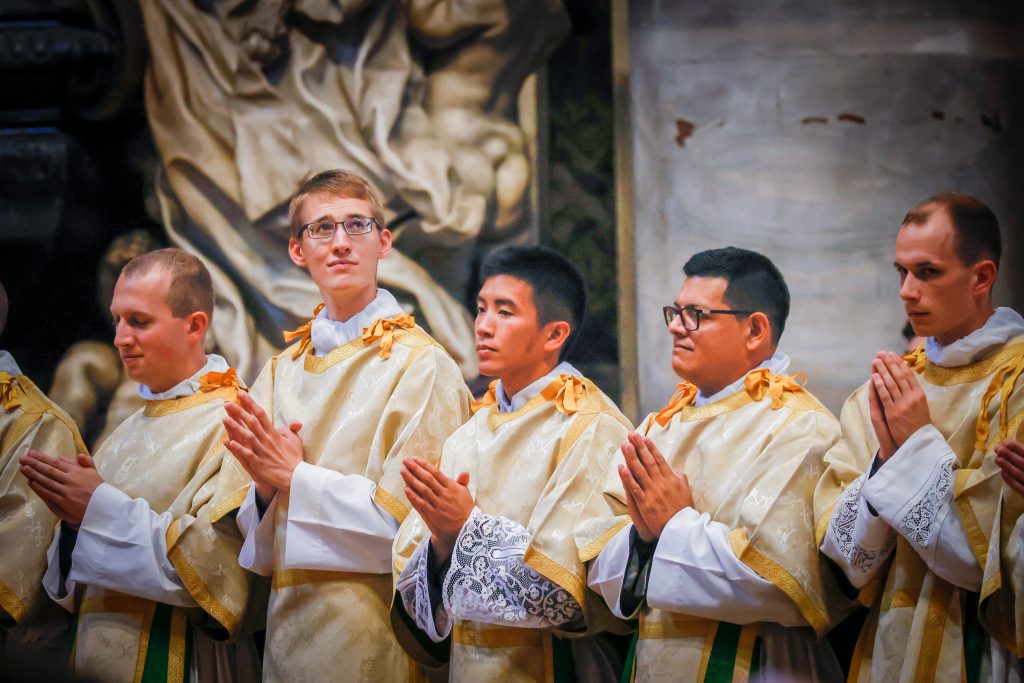 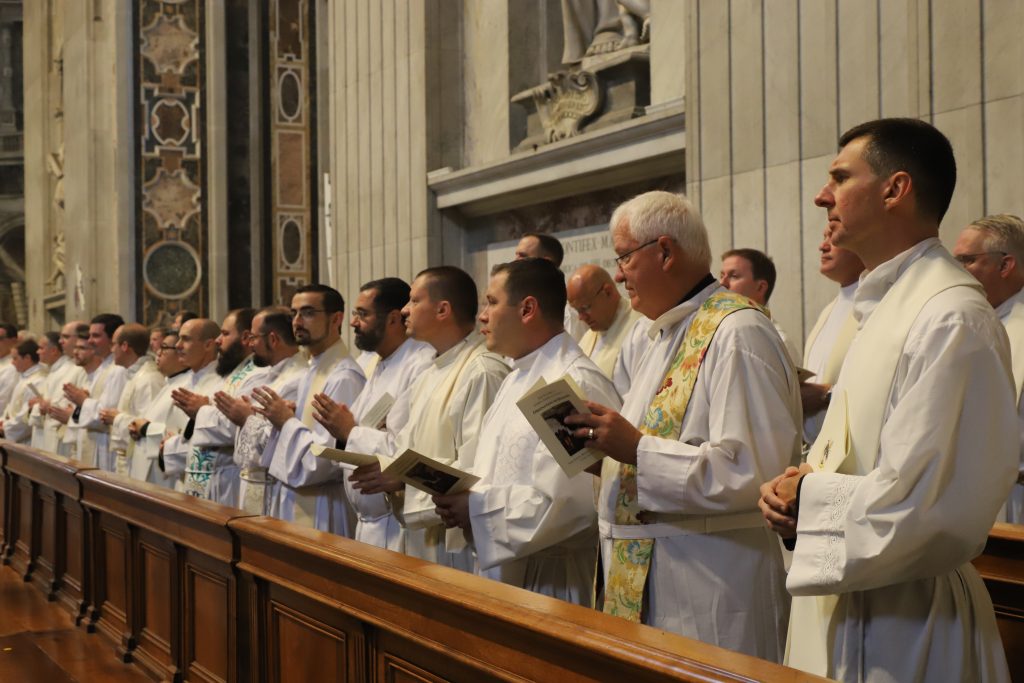 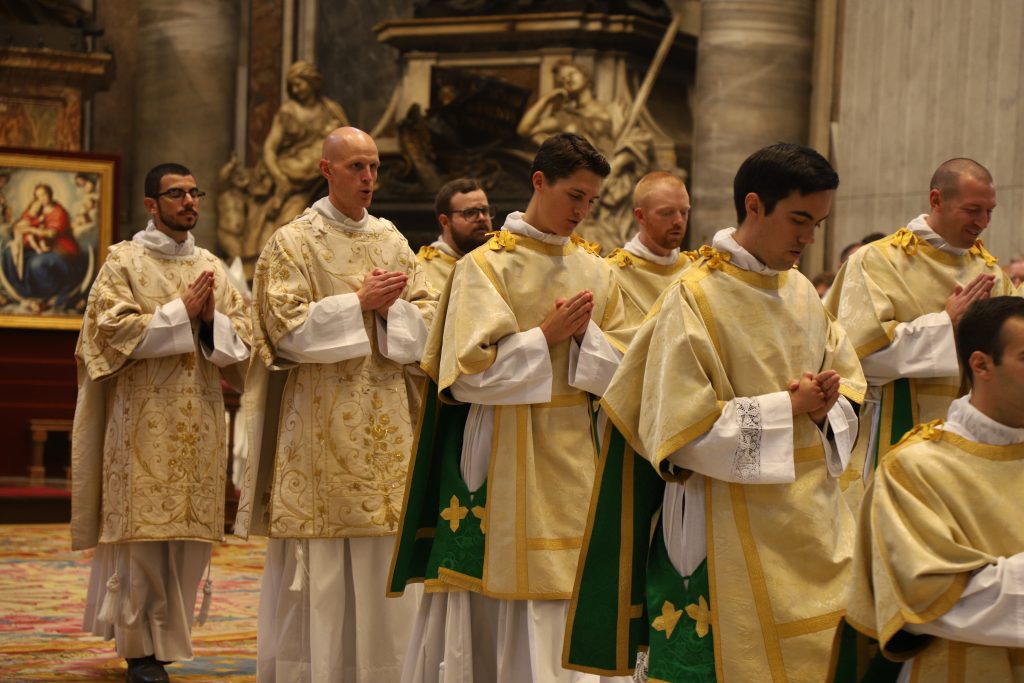 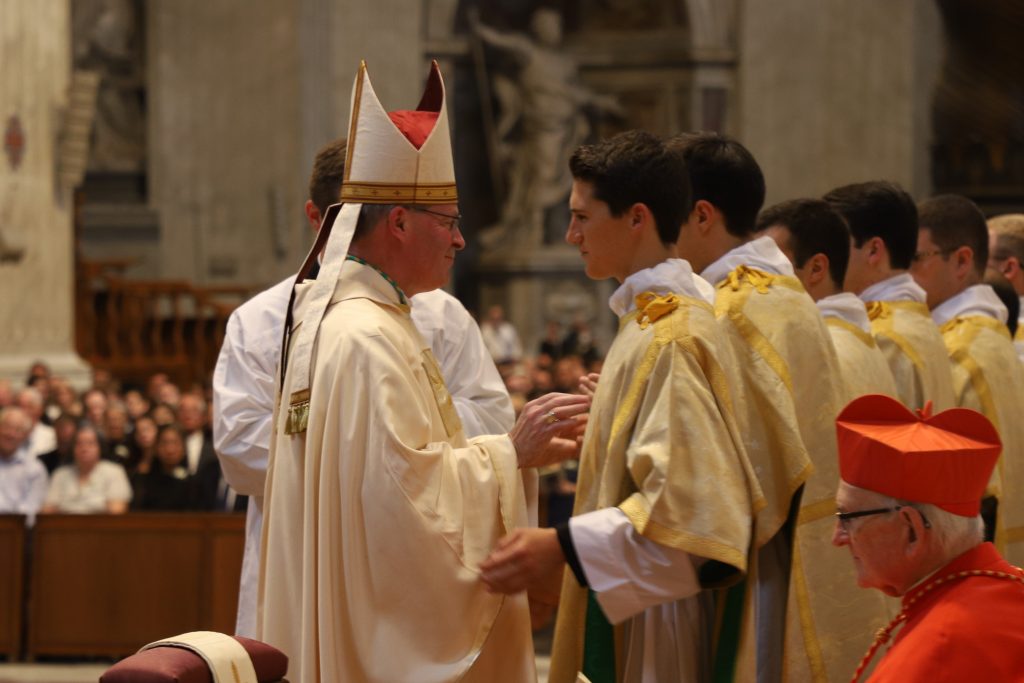 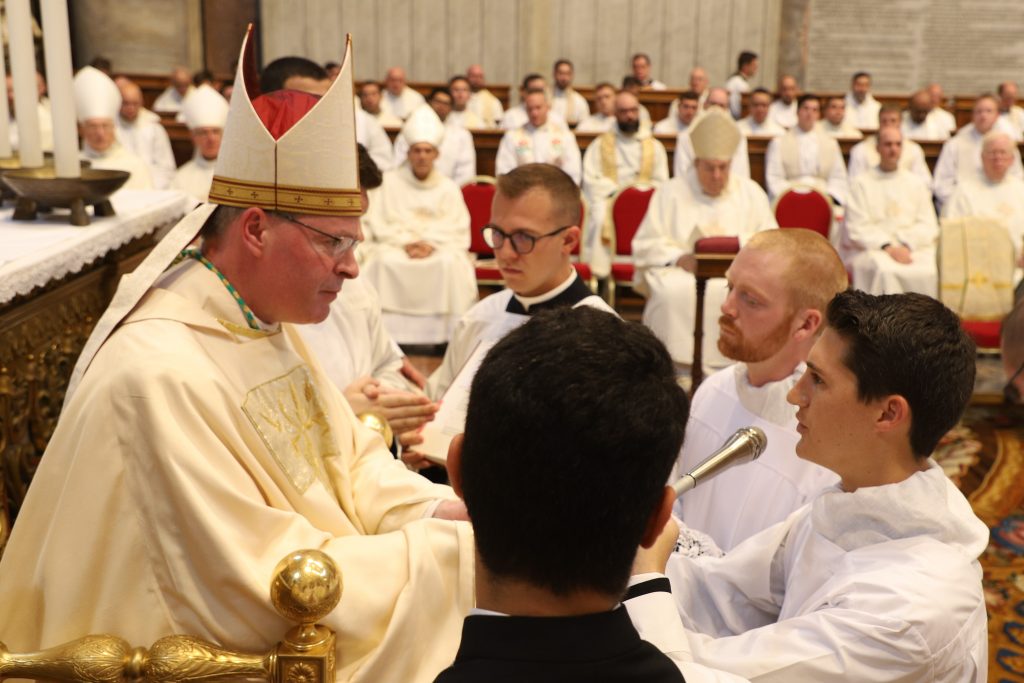 He was grateful for the family members and friends who were able to travel to Italy simply to show him their love and support and said, “I just pray it’s an opportunity for them to encounter the love of Christ themselves.”

While many family members and friends could not make the trip, there were other blessings that the new deacons received in being ordained in Rome. Deacon Anderson spoke of the family atmosphere at the NAC, saying, “All the seminarians at the North American College put many hours into it, the ceremony — praying for the liturgy, singing in the choir, masters of ceremonies, guys working as ushers — everyone in the house was involved in putting this week on for both the pilgrims and those who were not here.”

That community is what he expects to carry home to the Diocese of Fort Wayne-South Bend. “I know we’re just going to bring that back to the diocese, hopefully bring everything we learned here back to the service of the people,” he said. 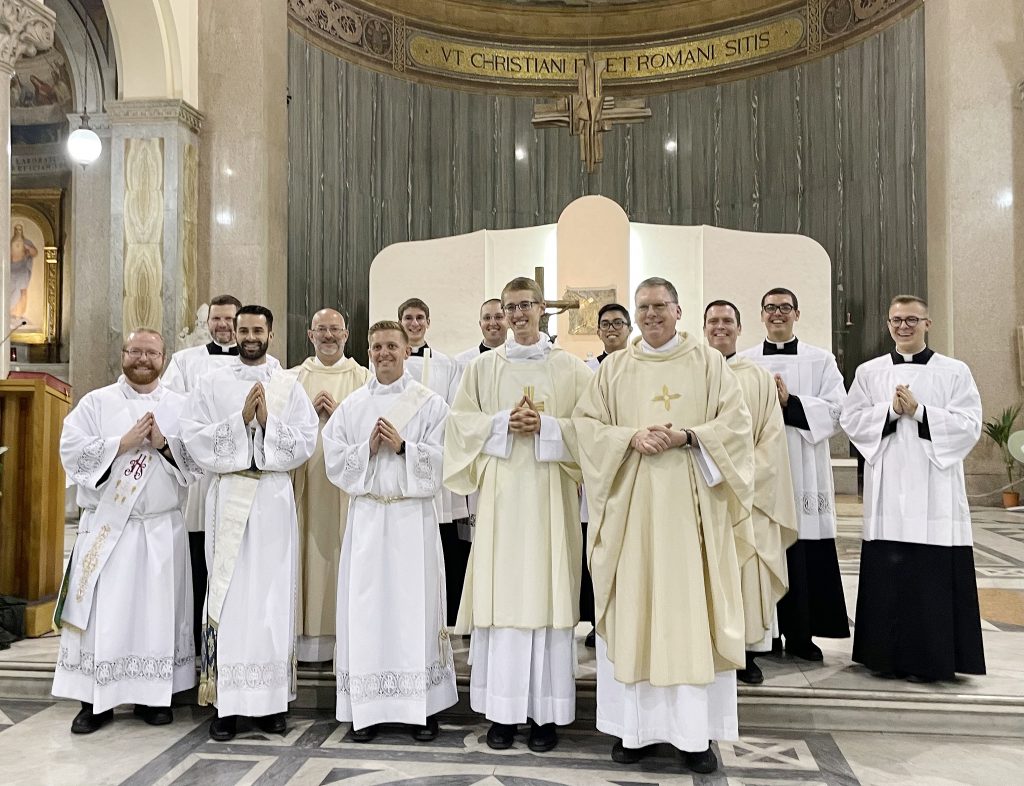 Provided by Father Mark Gurtner
Deacon Zane Langenbruner’s first Mass as a deacon at San Patrizio, the National Church of the United States in Rome. 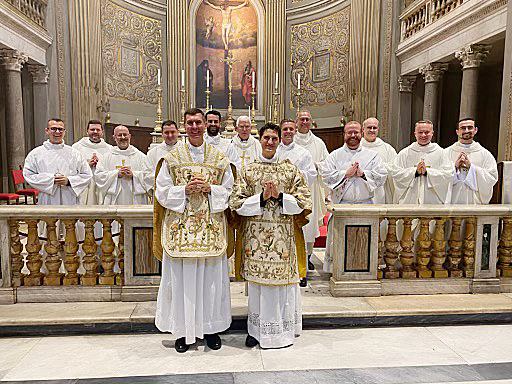 Deacon Langenbrunner spoke of his gratitude to be ordained with his fellow classmates, and anticipates his priestly ordination with his fellow deacons back in Indiana. “It was really special. Those were all guys that I arrived with three years ago. We’ve been through a lot of ups and downs over those three years, grown a lot together, done a lot of formation together, so it was really a great culminating moment of what the Lord has been doing in us in the seminary in the last couple of years.”

He reported that many of the deacon candidates embraced each other in the sacristy just prior to the ceremony. “I think we just kind of sensed the gravity of the moment … I felt more than anything grateful that I was going through this with those guys.” The reality of his ordination, he said, hit him on the evening before the ordination as he said his nightly prayers, knowing that the next day he would be saying them as a deacon.