Given the beauty of the architecture at St. Adalbert Church, South Bend, it’s understandable why it has been nicknamed “the cathedral of the west side.” The fact that such a magnificent church, with gorgeous stained glass windows, numerous arches, intricate gothic styling and triple spires, was built not from wealth but from the sweat of hard-working Polish immigrants, makes it even more impressive.

St. Adalbert has a rich background that’s closely tied to the history of Polish immigrants to the South Bend area. The parish was the last and the largest of four Polish Roman Catholic Churches founded in South Bend.

According to a history book printed for the parish’s 50th anniversary, Polish immigrants started settling in South Bend around 1868, even in the face of what were, at one point, determined to be insurmountable obstacles. They formed fraternal aid societies, whose members then organized to build churches. The St. Adalbert society became official in 1905 with 80 members. Its land committee went house-to-house, taking collections and offerings that varied from $.05 to $.25 per family. When a total of $402.10 had been collected two lots were purchased and then sold in order to purchase land on Olive Street, between Huron and Grace, where the present church, school and rectory are located. The parish also held many socials, bazaars and picnic fundraisers. In the fall of 1909 the foundation for the combination church and school building was laid. 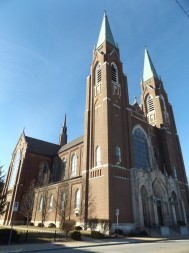 St. Adalbert’s first pastor, Father John Kubacki, was greeted by a huge delegation waiting to follow his car in a huge procession, carrying banners. More church societies were formed before the church building was even completed, including the Young Ladies Holy Rosary Society, The Children of Mary, The St. Joseph Young Man’s Society, the Woman’s Holy Rosary Society and more. The first baptism was performed in the rectory on Aug. 4, 1910.

A dedication for the new church/school took place on Sept. 4, 1911, with Bishop Paul Rhode, the first Polish bishop in the U.S. and auxiliary bishop of the Chicago diocese, presiding. The church was on the first floor, eight classrooms on the second and the parish hall on the third. The following fall the Felician sisters from Detroit came to open the school. The sisters had living quarters in the school until the new and present rectory was built at the rear of the church. The three-story brick rectory — the largest in the city — was completed in June 1915.

Although not in the recorded history, St. Adalbert pastor Father Paul Ybarra, CSC, said the rectory was built so grandly — with stained glass windows, even — in the hope it would become the seat of the bishop. 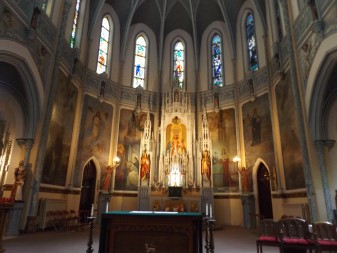 The beautiful sanctuary altar at St. Adalbert Church has statues of St. John the Evangelist on the left and St. Adalbert on the right. The murals on the walls surrounding the sanctuary depict different saints and Biblical scenes.

The large gothic church that is St. Adalbert today was built in 1926 at a cost of $230,000. Bishop John Francis Noll officiated at the church’s dedication Mass on April 25, 1926 — the feast of St. Adalbert. According to the history book, 9,000 people, including 32 local and out-of-town priests, societies from all four Polish churches, the mayor and other city officials joined in the procession and celebration.

The church building has changed little since that time. Numerous stained glass windows tell the story of the Catholic faith: The seven sacraments are represented on the windows surrounding the altar, and the two largest windows on the north and south side depict the Feast of Cana and Christ with the little children. Statues of saints circle the entire church, each in its own niche. Murals of saints and Bible scenes are painted on the walls in the front of the church. Many of the stained glass windows and murals in the parish feature Polish inscriptions.

Father Ybarra said it is a “beautiful space to celebrate Mass,” and added that he often feels the angels are watching him, as a mural facing the altar has angels looking that direction.

St. Adalbert is still an immigrant church, but now Masses are celebrated in Spanish and English instead of Polish and English. When St. Stephen Church was closed in 2003, its Hungarian and Spanish parishioners were divided between St. Casimir and St. Adalbert. Father Ybarra was assigned to the now-combined parishes in July 2016.

Linda Zakowski Shaw grew up at St. Adalbert, and her parents still live across the street. Her grandfather helped to get the church built, collecting those nickels, dimes and quarters. Her parents spoke Polish, but Shaw didn’t. When she attended St. Adalbert school she said there were about 600 kids — two classes for each grade level, and back then there was no restrictions on the number of students per class. She remembers when St. Adalbert Hall burnt down in the early 1970s, because that was where her parents’ wedding reception was held. Parish leadership decided at the time that rather than rebuild, they would make the parish hall on the first floor of the school.

Shaw started working for the parish part-time and has been full-time office manager for many years. Father Ybarra is the eighth pastor she’s worked for, starting with Father Eugene Kazmierczak. “The parish has evolved and sometimes change is hard,” she admitted, noting it was particularly an adjustment for everyone when the merger happened. But they have a beautiful church, and if something hadn’t happened to increase attendance they might’ve lost it, she said. “I think we’ve progressed a lot,” she added, smiling.

Of the approximately 1,000 families at St. Adalbert, 90 percent are Hispanic. Father Ybarra cites the young, Latino population as one of the parish’s strengths.

“The community is growing — we’re able to fill St. Adalbert for the Spanish Masses,” he said. In fact, the Hispanic community is starting to spill over into the English Masses. It’s interesting, he noted, that there are multiple generations at the Spanish Masses, but mostly seniors at the English Masses. Older Polish-Americans are still connected to the parish and make up a good part of the English community: Polish hymns are still sung during Masses, but Mass in Polish is no longer offered. Father Ybarra is “totally open to doing a Polish bilingual Mass again,” though.

Ministries in English that have long histories include the Harvest House Senior Group, in which 100 seniors meet once a month for Mass, meals and social times including bus trips. The Felician Sisters Auxiliary is still very active and helps support the Polish community as well, as do the Felician Sisters. St. Adalbert also has a large St. Vincent de Paul Society.

A bilingual youth group recently restarted, led by Deacon Ryan Pietrocarlo, and has about 30 kids, 18 of whom took part in the Right to Life March in Washington, D.C. in January. There’s also an 18-35 young adult team.

Christ Renews His Parish started in English at the parish, but is now being held only in Spanish. A few of the largest Spanish ministries include Grupo de Oracion, a charismatic prayer group carried over from St. Stephen, and Grupo de Matrimonios, a charismatic group focused on marriage and family. There are about 100 members in each.

Father Ybarra would like to see more involvement in the church and would like to build up the attendance at English Masses again.

“This is their heritage — this is still their church,” he said, adding that, for the most part, the second and third generations who grew up in the parish no longer attend.

St. Adalbert has a vibrant school community, with approximately 230 students in pre-kindergarten through eighth grade. The Felician Sisters who started the school are still a part of it today. Principal, Andrew Currier came to St. Adalbert five or six years ago, according to Father Ybarra, who said he turned the school around and got it up to an “A” grade for state testing.

Currier created a “house system” with the students in third-eighth grades. There are four houses named after notable members of the Holy Cross order: Children in different grades are grouped together into a “house” designated with a particular color of ties and T-shirts. The idea is to create unity and combat bullying.

The school and parish have a strong connection to Notre Dame: Several of the teachers are or were Alliance for Catholic Education teachers, and they work with the program to help provide classroom training for those still in the program. He said they also receive funding from some Notre Dame events. St. Pius X, a sister parish, also provides generous support for the students.