WASHINGTON (CNS) — When it comes to the three pillars of Lent, almsgiving is a little bit like the middle child, not always getting the attention that prayer and fasting do.

The word hardly rolls off the tongue and people don’t talk about it as they might discuss what they are giving up for Lent or how they might be praying more or reading spiritual books during the 40 days before Easter.

A February editorial in America magazine described almsgiving as the “under-practiced, under-encouraged Lenten discipline” and pointed out that in the magazine’s 110-year-old archives, a search for prayer and fasting in article titles had thousands of examples but a similar search for almsgiving yielded just two results. 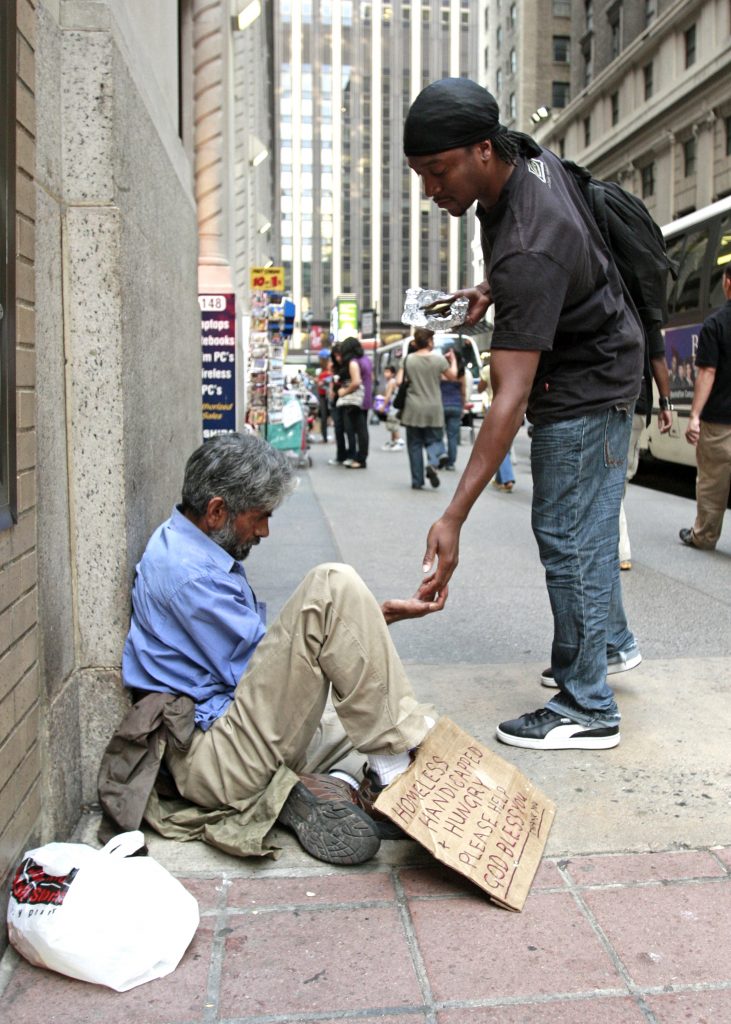 A pedestrian gives money to a homeless man sitting outside St. Francis of Assisi Church in New York City. Almsgiving, donating money or goods to the poor and performing other acts of charity, is one of the three pillars of Lent, along with prayer and fasting, but some say it gets the least attention. (CNS photo/Gregory A. Shemitz)

Almsgiving is defined as donating money or goods to the poor and performing other acts of charity. The Catechism of the Catholic Church describes it as “a witness to fraternal charity” and “a work of justice pleasing to God.” The practice of giving to help those in need runs through all the major faith traditions.

Christians might have good reason not to talk about their almsgiving practices since biblical warnings are pretty clear on guidelines of keeping this practice quiet.

For example, in Matthew’s Gospel, Jesus has this to say: “When you give alms, do not blow a trumpet before you, as the hypocrites do in the synagogues and in the streets to win the praise of others.”

But out of sight in this case should not mean out of mind.

The Old Testament is full of reminders about the need to give alms. A passage from the Book of Tobit goes a step further by saying “almsgiving saves from death and purges all sin.”

So, if believers know that they should give, why isn’t this discipline more of a Lenten topic of conversation?

Jesuit Father Bruce Morrill, the Edward A. Malloy professor of Catholic studies at Vanderbilt University Divinity School in Nashville, Tennessee, said one possibility is that so much of the religious practice of Lent is shaped by images that represent what people are trying to do with their faith — ashes, for example, or fish on Fridays.

“Almsgiving is not easily recognizable,” nor does it necessarily demonstrate religious devotion as prayer and fasting do with their focus on personal holiness, he said.

He pointed out that the practice of giving to those in need was not recognized for its spiritual value even in the New Testament. Jesus spoke about being asked: “Lord, when did we see you hungry and feed you, or thirsty and give you drink?” and His response was if they did this for “the least of these” they also did it for Him. 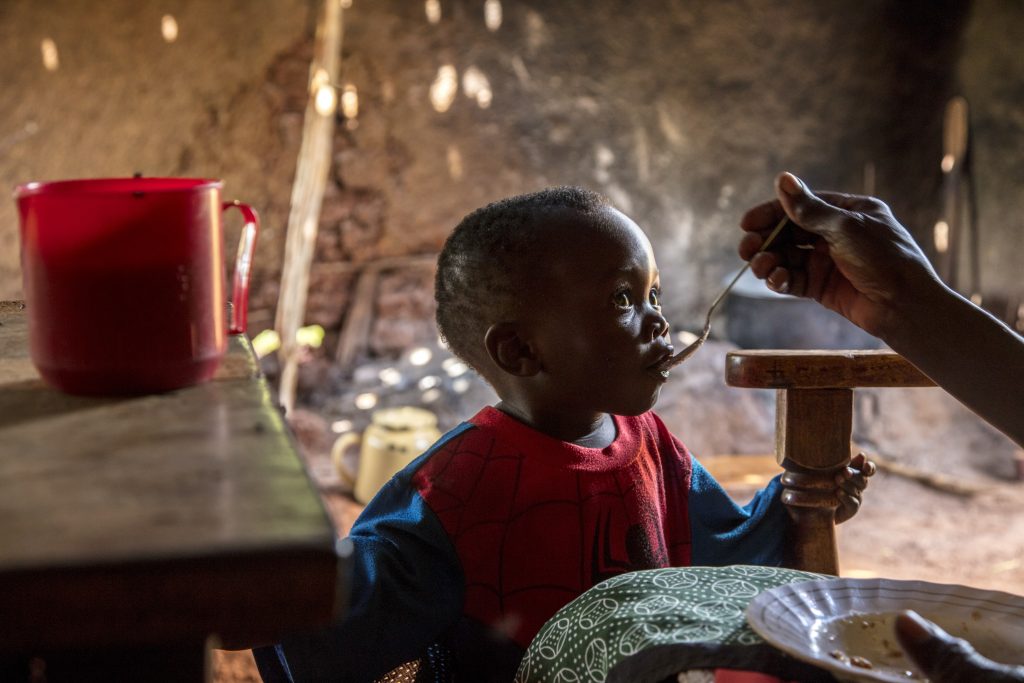 A grandmother who has been part of a Catholic Relief Services’ program for family nutrition shares her lunch with her youngest of seven grandchildren in the kitchen of the family home in Konjiko, Kenya, May 1, 2019. Lenten alms donated through the CRS Rice Bowl program support the agency’s work in roughly 45 different countries. (CNS photo/Georgina Goodwin for Catholic Relief Services)

Since the Second Vatican Council, Father Morrill said, the Church has made more of an effort to connect worship and prayer to moral activity, and many Catholics have made the connection that fasting is not just to be pious but should have practical measures: taking the money that would have been spent on food or drink, for example, and setting that aside to give to the poor.

That is the whole idea behind Catholic Relief Services’ Rice Bowl, the small cardboard box for collecting donations to help those supported around the world by CRS, the U.S. bishops’ overseas relief and development agency. Since its inception in 1975, CRS Rice Bowl has raised nearly $300 million. Last year, nearly 14,000 Catholic parishes and schools across the U.S. participated in the program.

One of the suggestions on the website is to follow meatless recipes it provides from around the world and to put the money saved from not buying meat into the Rice Bowl.

Deacon Nicholas Szilagye, writing in a 2018 issue of Horizons, the online newsletter of the Byzantine Catholic Eparchy of Parma, Ohio, linked almsgiving to the other Lenten disciplines by describing it as “fasting from our income and material possessions” and saying it translates “prayers into love for each other by giving to the needy in the name of Christ.”

He stressed the practice is not an optional one, but one that is required of believers, but he also lamented that it “seems to get the least attention among the three” Lenten disciplines.

The deacon suggested that people create an almsgiving plan that doesn’t necessarily need to be about giving money but also could be a donation of time, energy or talents to those in need.

“Let’s make almsgiving an encounter with God during Lent through the face of the poor,” he wrote.

Similarly, Father Morrill stressed that when rooted in faith, the practice of caring and providing for those in need is a way of “knowing this is how you encounter and know God.”

Alms might not get their due, so to speak, because Christians are hesitant to say their efforts to help others somehow earns them something, the priest said. But really, he said, they should recognize the practice is “a way to join in the generosity of God” and show the love of God for all, which is “truest when given to the least.”