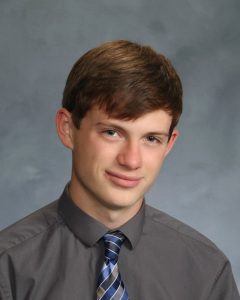 A creative professional and scientist at heart, Aidan Kaczanowski is valedictorian of Penn High School. He hopes to combine his love of computer programming into a potential career in computer science at Purdue University, West Lafayette, beginning this fall.

Computer programming has been Kaczanowski’s main hobby throughout high school, as he tinkered with writing code for applications including “desktop applications, mobile apps, web development, to writing scripts that run on microcontrollers.” He’s hoping his internship programming for CTS Corporation in Elkhart this summer will help him build the necessary skills to remain atop the competition in a fast-changing industry.

Aside from his love of computer science, Kaczanowski has been very active in his home parish, St. Thomas the Apostle, Elkhart. He has participated in youth group; the National Right to Life March, twice; and volunteered as a religious education instructor for kindergartners when he was a freshman and sophomore and for fourth graders his junior and senior years.

He shared how strongly being a catechist has impacted his life. “Having the opportunity to pass my faith on to youngsters and teach them to listen for the voice of Christ in their hearts has been a powerful experience for me. On a less visible and deeper level, my faith has been a great source of strength throughout all of the struggles, successes and failures of high school.”

Kaczanowski’s hobby is playing chess. He believes that by honing his chess-playing skills instead of spreading himself more widely across various interests, he can improve his technique. During high school he has taken weekly chess lessons from a professional player to improve his skills, and he regularly attended several community chess organizations including the South Bend Chess Club, the Downtown Elkhart Chess Organization and occasionally the Chicory Cafe Chess Club. He competed regularly on the weekends, traveling to many of the major cities in the Midwest to attend chess tournaments. At school, he has been captain of the Penn High School chess team for four years and has “worked hard to teach the younger players and get them more involved in chess.”