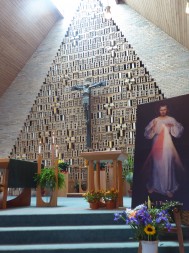 The image of Divine Mercy was appropriate to discussions of the mercy God has on mothers who ask for His forgiveness. Those who have struggled personally with the issue of abortion gathered as St. Therese, Little Flower Church, Oct. 23, to pray and receive forgiveness and support.

In God’s great love and mercy, a respectful and gentle group gathered for three hours at St. Therese, Little Flower Church, South Bend, on Sunday, Oct. 23, to remember and pray for healing and forgiveness for those who suffered from having an abortion. There were testimonies of lives forever altered by an abortion, intercessory prayer asking for healing and pardon, Eucharistic adoration and the sacrament of reconciliation for personal conversion and prayer. Lastly, Mass was celebrated to offer to God the pain and hurt. Truly truth in charity was present during the afternoon.

From the example and ministry of Jesus Christ, the Catholic Church understands the healing and reconciliation that is necessary after abortion. An Afternoon of Prayerful Remembrance and Intercession was designed to begin to aid that recovery process. The idea for the afternoon was developed by Theresa Bonopartis and the Sisters of Life to bring together the many different people who are affected by abortion and the impact this abortion decision has in the community. A prayer service was first held in the Archdiocese of New York and has been conducted at the Basilica of the National Shrine of the Immaculate Conception in Washington, D.C. as part of the Jan. 22 Prayer Vigil for Life. The idea is for the community to gather and pray in the tender mercy and love of Jesus, the divine healer.

The timing of this afternoon, during the Jubilee Year of Mercy, was especially important. The image of Divine Mercy was prominently displayed near the altar as a reminder that no sin is too great or too small for God to forgive.

Allison Sturm organized the moving afternoon through the Office of Evangelization and Special Ministries. She emphasized: “While this event remembers all of those who have been wounded, I also want it to inspire people to use what they learn to help someone who is hurting from a past abortion or facing an unplanned pregnancy. My hope is to help form intentional disciples who spread the Church’s teaching on the sanctity of life as well as the message of God’s love and mercy by emphasizing the importance of sharing the truth and tragedy of abortion while always speaking of those involved with this decision in charity.” 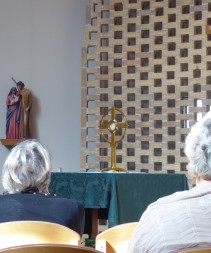 It is important to remember that in one seemingly small, ‘private’ choice to abort a child, the entire community is affected. Abortion fragments society by removing the most fragile, innocent lives in the community, those of the unborn children. Like a ripple, an abortion forever changes not only the baby’s life, but that of the father and mother, aunts, uncles, grandparents, friends, neighbors and the American and global society at large. Since the legalization of abortion in America in 1973, these ripples have silently affected the Diocese of Fort Wayne-South Bend and the nation. Speaking about this pain is vital to the life of a community.

Understanding that many people are touched by abortion, the afternoon began with a prayer service where testimonies from various perspectives were read aloud. These literally gave voice to people who encounter a post-abortive woman but often say nothing, such as her doctor, grandparent and counselor.

A grandfather spoke the following: “I often wonder why my daughter did not feel she could come to us and tell us about her pregnancy. What was it that made her feel that having an abortion would be easier than coming to us and allowing us to be there for her?  We failed her because she felt she could not trust in our love for her.

A counselor added: “I am sorry I did not validate the feelings of those who came to me suffering from a past abortion. It was so hard to know what to do… it was easier to ignore it. By my refusal to address their abortions, I know I cause them more pain and grief. I am sorry.”

Participants seemed to feel that that the testimonies were one of the most moving parts of the afternoon.

Orphelia, a parishner of St. Therese, Little Flower, said how eye-opening the testimonies were. She felt that “sometimes there is so much pain present that there is much healing that needs to be done. No one leaves an abortion clinic happy about their decision.” She found that the pro-life community needs to tell abortion-minded women, “We love you and your baby — both lives are sacred.”

Another attendee, Katherine, found herself moved by the power of intercessory prayer. “We prayed for women in the world right now considering an abortion.” She said how helpful it was to remember to keep compassion and mercy in mind when speaking with people. Both women were grateful that this afternoon was hosted and talked about, as it was a topic of so much shame and not often mentioned in society.

Father Bill Schooler, pastor of St. Pius X Parish in Granger, was one of many priests present to pray, hear confessions and celebrate the closing Mass.

“During this year of mercy, it is so important to reach out to those who have been affected by the sin of abortion and bring them to God’s mercy,” he said. The same merciful gesture was represented visually in the image of Jesus as Divine Mercy and the vision of St. Faustina, life-sized and present right next to the altar, where God’s great mercy flowed forth during the Mass.