WASHINGTON (CNS) — The bells at the Cathedral Guadalupe in the Diocese of Dallas rang 31 times the night of Aug. 7 for those killed in the mass shootings in El Paso, Texas, and Dayton, Ohio, as hundreds of people gathered inside the cathedral to pray for the victims, survivors and their families.

Dallas Bishop Edward J. Burns was the main celebrant of the evening bilingual Mass. “These tragic shootings have caused great pain and sadness not only in the communities in which they occurred, but also for people of goodwill around the country,” Bishop Burns said in announcing the special Mass.

Special liturgies, prayer services and other memorials have taken place at houses of worship across the country since the Aug. 3 and 4 shootings in Texas and Ohio that left 31 dead and dozens more injured.

In addition to statements from the U.S. Conference of Catholic Bishops, El Paso Bishop Mark J. Seitz and Cincinnati Archbishop Dennis M. Schnurr issued immediately after the shootings, reaction to the tragedies have poured forth from other faith leaders across the country.

Many of these statements express sorrow and ask prayers for the victims and their families, decry the rise of “racism and white nationalism” and call for “commonsense gun control.” 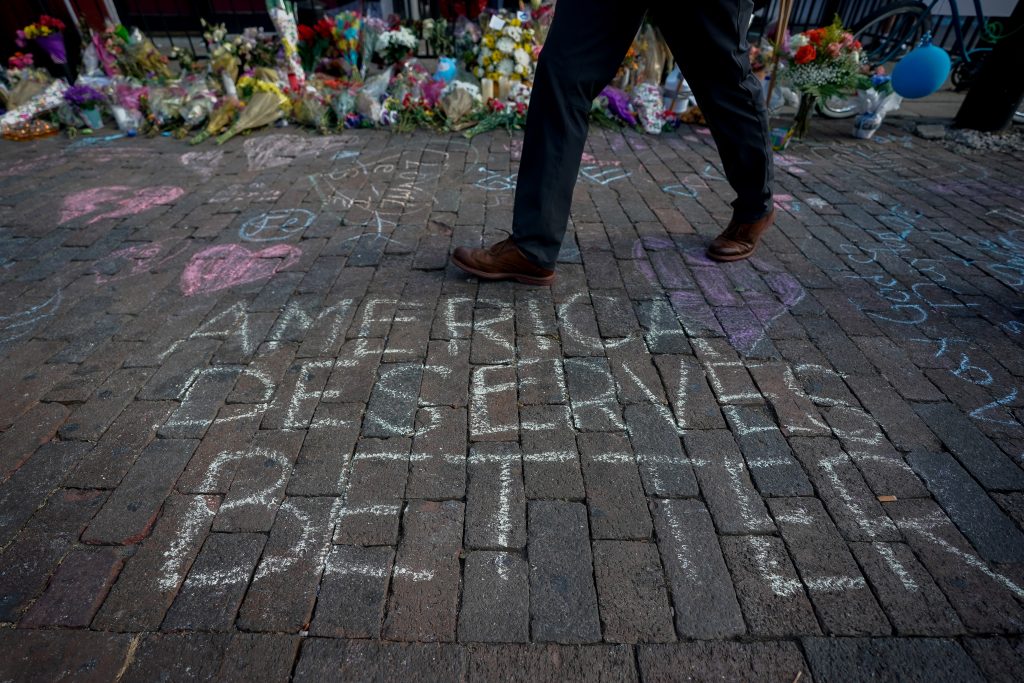 A man walks past a memorial Aug. 7, 2019, for those killed in a mass shooting in Dayton, Ohio, four days earlier. Three U.S. bishops’ committee chairmen issued a statement Aug. 8 to call on the nation’s elected officials “to exert leadership in seeking to heal the wounds” of the country caused by the Aug. 3 and 4 mass shootings and urged an end to hateful rhetoric many see as a factor in the violence particularly in Texas. The Aug. 3 shooting in El Paso, Texas, was followed less than 24 hours later by the mass shooting in Dayton Aug. 4. (CNS photo/Bryan Woolston, Reuters)

General Council of the Adrian Dominican Sisters in Adrian, Michigan: “We weep with and pray for the families of the latest victims of murderous rampages in our country — this time in El Paso and Dayton. We cry out in anguish at the ‘normalization’ of gun violence that claims the lives of hundreds of victims each year and at the racial hatred and white nationalism that is fueling horrific acts of domestic terrorism. This ‘new normal’ is not normal. It goes against the grain of every value of decency and goodness we claim as nation and strive for as people of faith, as brothers and sisters created in the image and likeness of our one God. We insist on commonsense gun control. There is no place in our streets, our schools, our homes for AK-47 assault rifles; gun owners, like vehicle owners, should be licensed; gun safety measures should be implemented and regulated. We insist on concrete measures to expunge the scourge of white nationalism that poses such a real and present threat to our brothers and sisters of color and is so toxic to our nation, assaulting the very fabric of our union.”

Sisters of Providence and Sisters of St. Dominic of Tacoma, Wash: “Today we raise our voices together as religious congregations of Catholic women to say enough is enough. Our congregations are called to lift up people who are poor and vulnerable, advocate for the marginalized and rejected, and care for the victims and the voiceless. We serve our neighbors in need through social justice ministries and compassionate presence. The recent mass shootings and rampant rage and division that has overpowered the nation represents a most egregious injustice — the disrespect of and failure to protect our most precious gift of life — and demands changes to our national gun policy and our national culture. … Let us call on our Provident God to move each one of us to action so we can help put an end to this senseless violence. Everyone is a child of God, equal in the eyes of God, and should be equal in our eyes as well. The path to peace begins here.”

Boston Cardinal Sean P. O’Malley: “Our nation was founded on the principle that all people are entitled to ‘life, liberty and the pursuit of happiness.’ We implore our elected leaders to rise above ideological differences and work together to address the serious issues facing our country by enacting meaningful and effective policies to end the violence. This includes keeping firearms, particularly assault weapons, out of the hands of those who would use them to inflict devastating harm on our communities. We must address inadequate mental health care in this country. Finally, we must work towards a more civil and just society that rejects all forms of violence and hatred in our country. The fabric of our national conscience is at risk.”

Metropolitan Archbishop Borys Gudziak of the Ukrainian Catholic Archeparchy of Philadelphia: “The shock of the wanton violence and massacres calls us to conversion. The gun culture, violence on screens and personal morality, in general, in our country — all need conversion. The complex factors which stand behind the hate, racism, rejection of immigrants, the compulsions and addictions, the mental illness and escalating aggression do not have one common social denominator — other than a spiritual and moral one — the rejection of God, a lack of love for neighbor. The free-for-all in our popular culture, the use of guns as toys or instruments of revenge, the lack of respect for the sanctity of human life from conception to natural death is all in a continuum. So is the vulgar political discourse. I am afraid it will get worse before it gets better. Unless we have a change of heart. Unless we address the root causes. Unfortunately, many political and social leaders are taking us in the wrong direction. Pray, be humble and do the right thing always and everywhere. That is the best we can do, that is the example of our Lord in the face of injustice and violence.”

Leadership Conference of Women Religious: “What we are witnessing today is being called stochastic terrorism — the use of mass public communication, usually against a particular individual or group, which incites or inspires acts of terrorism which are statistically probable but happen seemingly at random. The demonization of groups through mass media has been shown to result in violent acts because some who hear this speech interpret it as promoting targeted violence. We insist that society be protected from such acts of terrorism. We are called to confront rhetoric that stokes racism and hatred of anyone perceived to be ‘different’ than we are. We are all responsible for monitoring our own language and actions and calling attention when the language and actions of others cross the line. We implore all legislative bodies to pass legislation that effectively prevents gun violence. We call for the passage of laws that ban assault weapons, require universal background checks for all gun sales, provide funding for gun violence prevention research, and makes the trafficking in weapons a federal crime.”

Sisters of Mercy of the Americas Leadership Team: “It is impossible to ignore the sickening, racist motives of the El Paso shooter. This horrific violence was fueled by racist rhetoric, irresponsible gun laws and dehumanizing policies toward immigrants. We must, as a people, name it, and we must defy it. We must stand strong together to condemn the white supremacist ideology that motivated the shooter and that has poisoned the soul of our nation. We must further stand together to condemn the inflammatory, hateful speech voiced almost daily by public figures — including the president of the United States — speech that does nothing but fan the flames of violence. We agree with those who say we need to address the mental health problems that drive some to commit violence with guns. But let us not also be ignorant to the fact that for far too long, weapons designed for war have been far too easily accessible to civilians. … Let us demand that, at a minimum, our legislators enact gun safety laws like H.R. 8, a bipartisan measure that calls for strict background checks for those purchasing guns. … We, the Sisters of Mercy of the Americas, believe that we must all be actively working toward a culture that promotes peace and non-violence rather than one that glorifies violence and hate.”

Catholic Charities USA: ‘’Hate and violence have no place in our society. It is abhorrent that some victims were targeted simply because they were perceived to be immigrants. As an organization committed to helping vulnerable people, Catholic Charities USA stands in solidarity with others committed to overcoming painful divisions that lead to such disregard for human life. We join other leaders and people of good will in calling our elected officials to take immediate action to address the scourge of gun violence and xenophobia. We pray for the victims and their families, for the first responders and for healing in our suffering communities.”

The Rev. Jennifer Butler, CEO Faith in Public Life: “On the seventh anniversary of the attack on the Sikh temple at Oak Creek (Wisconsin), which killed six people, we mourn continued mass murder in El Paso and Dayton. People are being murdered by weapons of war because of their race, their religion or simply being in the wrong place. President (Donald) Trump must stop his rhetoric, which incites violence, and prioritize investigating white supremacist terrorism. The Senate must pass H.R. 8, which would amend federal gun laws to require background checks for all gun sales. Only these concrete steps toward repentance will start to heal our nation.”