PORTLAND, Ore. (CNS) — Firearm attacks have changed society in the United States as mass shootings have become more frequent and the public is forced to face the psychological consequences, often silently.

More than half of American adults consider mass shootings a latent threat, a Reuters/Ipsos survey in August discovered. Many respondents reported experiencing a sense of insecurity with increased levels of anxiety.

“This situation puts you on alert because you never know when or where the next massacre will happen. There is an imitation effect and it is happening very frequently,” one respondent said.

“We can never again believe that mass shootings are an isolated exception,” they said in a statement after a pair of early August attacks in Texas and Ohio. “They are an epidemic against life that we must, in justice, face.” 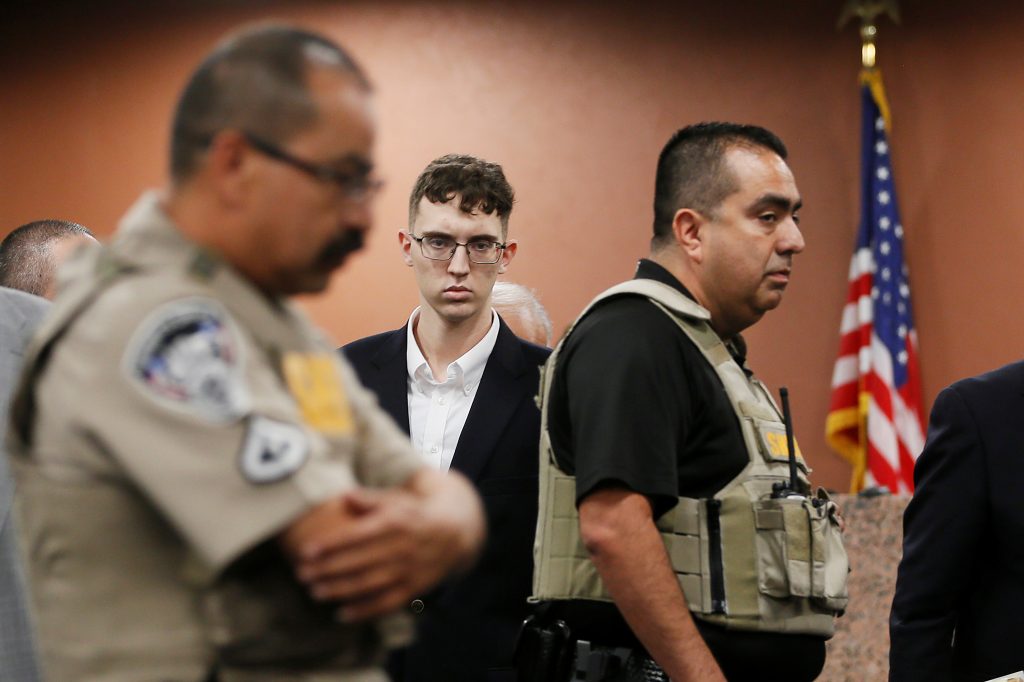 Patrick Crusius, 22, accused of killing 22 and injuring 25 others in the Aug. 3, 2019, mass shooting at a Walmart in El Paso, Texas, pleads not guilty during his Oct. 10 arraignment in El Paso. More than half of American adults consider mass shootings a latent threat, a Reuters/Ipsos survey in August discovered. Many respondents reported experiencing a sense of insecurity with increased levels of anxiety. (CNS photo/Briana Sanche pool via Reuters)

Statistics from the Gun Violence Archive website show that as of Oct. 10 in the United States there have been 326 mass shootings in which four or more people were killed or injured. The shootings accounted for 363 deaths and 1,329 wounded, leaving countless families mired in pain.

After a white supremacist shooter in El Paso, Texas, sought to “kill as many Mexicans as possible” Aug. 3, fear is especially strong among Hispanic families. Mental health hangs in the balance, experts said.

“I feel that the focus of the attacks and racism is directly against us,” said Edith Castillo, executive director of the Catholic Charities program El Programa Hispano in Gresham, Oregon.

Castillo, a mental health counselor, does not mince words in blaming President Donald Trump’s rhetoric and federal immigration policy for some of the violence, especially against Latino people.

It’s not a stretch to say that terms such as “invaders” can spark criminal actions against Hispanics, Castillo said.

“Many people have been fleeing places with a lot of violence in search of a place that gives them peace and quiet, but people are afraid of the current situation,” said Elsa Tzintzun, a mental health counselor at El Programa Hispano. “This causes immigrants to feel isolated and marginalized.”

Even those who were not present during an attack are affected by news reports, she said, explaining that trauma becomes an invisible and silent companion.

In 2014, after a shooting at Reynolds High School in suburban Portland, which left two students dead and a teacher wounded, El Programa Hispano offered psychological support. It was then that staff began to wonder how young people were affected by such incidents.

Tzintzun explained that after violent events it is normal for people to feel anxious and afraid; children may begin to behave differently and the changes can dampen their performance in school. The counselor listed irritability, nightmares, insomnia, tremors, sadness, apathy and lack of concentration as symptoms of fear.

Post-trauma symptoms do not necessarily mean people will develop a chronic problem, she said.

In Hispanic culture, many people think psychologists serve only those with severe mental illness or the rich, Tzintzun said. Mental health professionals who speak Spanish are also difficult to find, she said.

The professionals at El Programa Hispano offered several strategies to help manage stress and anxiety caused by violent events. They can be found at www.todayscatholic.org.

Montana is editor of El Centinela, the Spanish-language newspaper of the Archdiocese of Portland.