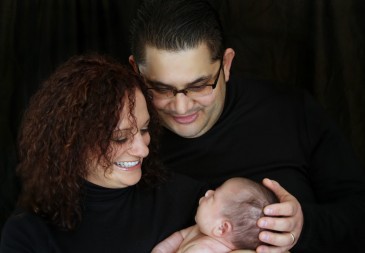 Donald and Mariagrazia D’Angelo prayed and leaned on each other, trusting in God’s will, during a lengthy and emotional adoption process — one that ended with their becoming parents to baby Alex two years ago.

“Many moms have nine months to prepare for a baby. I had one day!”

That’s how Mariagrazia D’Angelo explained the adoption process of her son, Alex. “We received a call from the Department of Child Services and had to say yes or no.” Would they be open to caring for a week old newborn baby in foster care?

After 15 years of marriage, the D’Angelos longed for children. Both naturally caring and nurturing people from large Italian families, they discerned that God had called them to be parents. But since their marriage on St. Nicholas Day in 1997, they were unable to conceive — then Mariagrazia suffered a severe car accident. Doctors were never able to give them a medical reason for their infertility, but suggested hormones injections. Mariagrazia never felt safe with them, so for years she and Donald waited, prayed and hoped.

Parishioners of St. Anthony of Padua, their faith was a natural part of their lives. They both trusted in God’s will, despite the difficulties. The love they lived was a love that knew both joy and pain.

The D’Angelos first turned to a private adoption agencies and began filling out paperwork and undergoing evaluations and testing. The process was difficult and expensive. Through a colleague at work, Donald heard about adoption and foster parent opportunities through DCS in the state of Indiana. They took classes for over a year, baby-proofed their house and became licensed foster parents in July 2012. The D’Angelos were open to any infant, of any race or special needs. “For us, a child is a child. They are no different. All are special; all are loved.”

Right away they were contacted by DCS, but discerning a good match was painful. Mariagrazia remembers well the many children they had to say no to, for a variety of reasons. “It’s important to see what is a good match for them and for you.” she pointed out.

Some children had siblings that had to stay together, and the D’Angelo’s small home could not hold them all. Other children had suffered such abuse that the couple thought they would not be the best fit to care for them. “I cried every time. It was so hard to say no,” Mariagrazia remembered. Each time they declined they would pray for the child and for a family to care for them, for the next six months.

About to give up, she went home to her parents in Italy for Christmas. She finally prayed, “whatever and whenever God wants, we will say yes. I became more peaceful in those weeks.” And on Jan. 1, 2013, the feast day of Mary Mother of God, a baby boy was born.

He was the 13th child of a cocaine-addicted mother who gave 12 of her children up for adoption. He was first given to a single woman as a foster mother but she found it difficult to provide for the newborn. The D’Angelos were next on the list. Donald received the call and spoke to Mariagrazia, who was coming home the next day from Italy. She wasn’t sure what to say, but like Joseph, the foster father of Jesus, Donald felt in his heart that they should say yes.

“Let’s take the chance,’” he recalled. After he picked Mariagrazia up from the airport, they drove to Babies R Us.

The next day Alex arrived. He came with only one bag, containing a change of clothes and two diapers, and a pacifier in his mouth. The previous foster mother took a look at the D’Angelos and exclaimed, “Oh my goodness! He looks just like you!”

For the next 19 months Donald and Mariagrazia’s hearts were expanded and challenged even more. They had hoped to adopt baby Alex at some point, but his birth mother changed her mind and was considering keeping him, even though she never visited or was able to stay clean enough to do so. Donald’s hope, which was positive for so long, began to wane, although he tried his best to care for his nervous wife and newborn.

Mariagrazia, even in her own desire to be his mother, would pray for Alex’s birth mother, thinking that was the best place for a baby. “I felt guilty,” she recalled. Years before, she had read books from Catholic Charities that had various perspectives on adoption, and she remembered the love that a birth mother had to have for a child in order to offer him or her for adoption. “We never can judge what circumstances they are going through,” she realized.

Mariagrazia remembers being surprised of how long the process took, as well as how much the judge wanted to give Alex’s birth mom a chance. The last court date was set for June 2014. The birth mother never showed.

On that date, the course of their lives changed. For the next four months, Alex could then be considered for adoption from foster care. While Donald began to feel hopeful again, Mariagrazia continued to have sleepless nights, worried someone would come and take Alex away.

On Sept. 5, 2014, a beautiful, sunshine-filled day, the D’Angelos legally adopted their son. Alex, then 19 months old, received a new, permanent birth certificate with their names on it.

“God does have a plan, Mariagrazia said, “Becoming parents, for us, was not ‘if,’ but “when.”

Right away they desired to have Alex baptized. “We wanted to welcome him into the family, and celebrate him,” she shared. They brought him to Roccadaspide, Salerno, Italy, to celebrate the sacrament, where all of their extended family and even the elderly ladies sitting on doorstops and bus stops knew and welcomed him. “He is quite a celebrity there, “Mariagrazia said with a laugh. “The older ladies wait for him with candies and treats and he just runs up to them giving hugs and smiles.”

Mariagrazia has a book, “God found us you!” that she plans on sharing with Alex when he starts asking questions about when he was a baby. She reflected that she experienced pains and realities of motherhood, but in a different way than many mothers do. She did not have the physical pain of pregnancy, delivery or post-partum recovery, but knows well the emotional heartache, aching in her soul and nights and days of waking and caring for a baby. She never saw an ultrasound or heard a prenatal heartbeat, but knows the joy of finally meeting her child, holding him and rocking him to sleep.

“We would go through this all over again, a thousand times more,” Donald said.

The couple is open to speaking with other adoptive parents. They can be reached at [email protected]