He wanders around the legs of the desks in the classrooms, sniffing at shoes, stopping at one student or another to beg for a treat or get a pat on the head, leaning against the legs of another student – perhaps one who is having a bad day – offering a dog’s version of a hug.

This is Ace the therapy dog, a cocker spaniel and honorary member of the teaching staff at Bishop Dwenger High School in Fort Wayne. His owner, Amy Gonzagowski, is head of the English department and teaches language arts to a wide range of students, both academically and grade-wise. She understands anxiety and its effects on learning, having suffered from panic attacks herself. 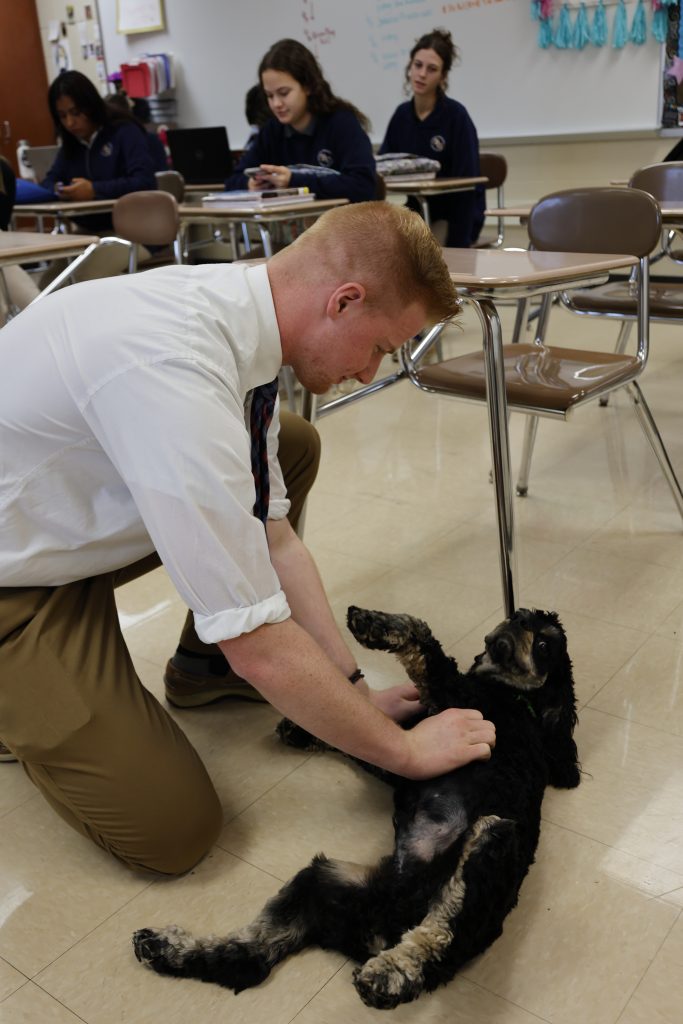 During and after the pandemic, teaching, she said, “became entirely different”, including how the students’ mental health took a hit. Though she sees a break in the clouds, Gonzagowski expects the negative effects will linger for years to come: “the amount of anxiety, depression, emotional problems (the students) have is just so much more significant than it ever was. I don’t think people realize that isolation did so much. Then just the uncertainty of the world and things like that that really weighed on them a lot.”

That alone is Ace’s purpose in the classroom. For some students, a dog can have a calming effect on them during difficult times. “When you’re having a panic attack, he will just come up and place himself on you because he just picks up on that,” Gonzagowski said. She has even seen Ace stop panic attacks in the classroom. 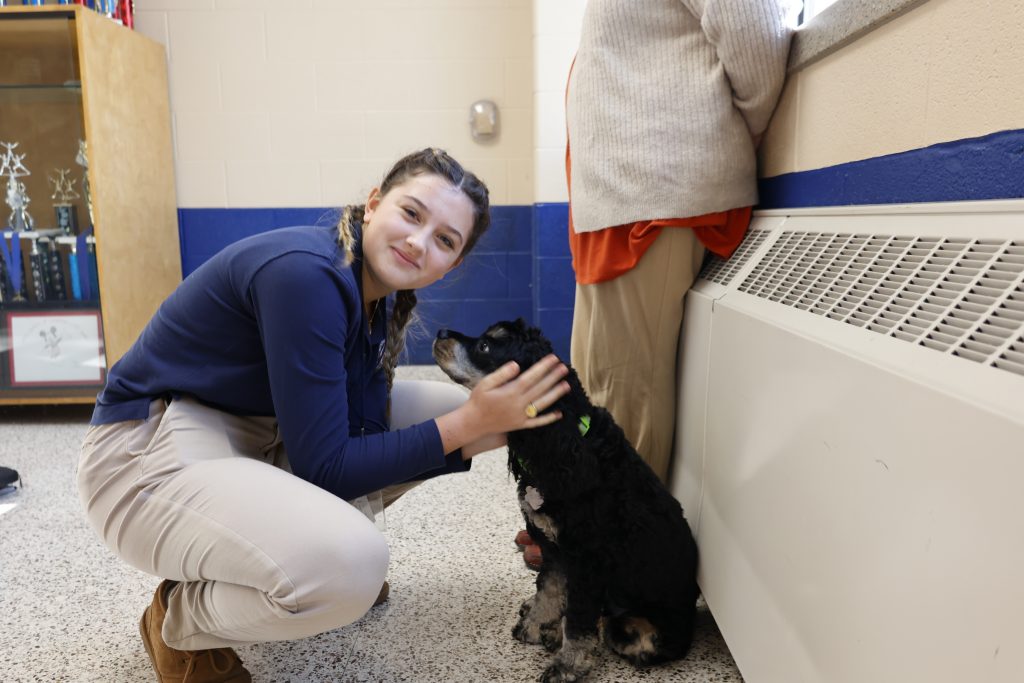 Photos by Jennifer Barton
Ace the therapy dog, a cocker spaniel and honorary member of the teaching staff at Bishop Dwenger High School in Fort Wayne, is seen in the classroom in these photos in December. Ace has been helping students with their mental health at the school for more than a year.

Cocker spaniels are known for their friendly and affectionate manner, and are sometimes called “merry marauders”, but Gonzagowski was surprised by his calm, mellow temperament after adopting the puppy from a breeder in Ohio during the coronavirus pandemic. She began asking the veterinarian questions about therapy dogs and spoke to Principal Jason Schiffli about the possibility of bringing Ace into the classroom.

All it took to get Ace certified were a few tests at the vet’s office and some paperwork. Gonzagowski’s daughter Megan handled his training and Ace perks up when he hears her voice coming down the language arts hallway. “He’s very bright, picks things up very fast,” Gonzagowski stated. With Ace within earshot, Gonzagowski reverts to spelling out the word “school”, or else the spaniel thinks it’s time to head to the classroom. 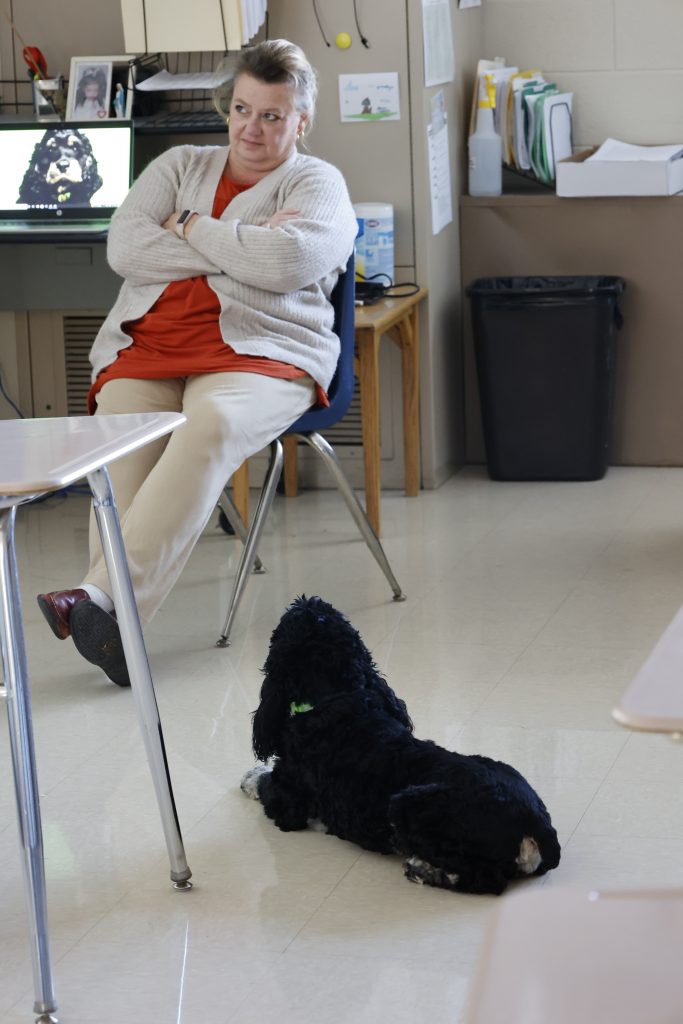 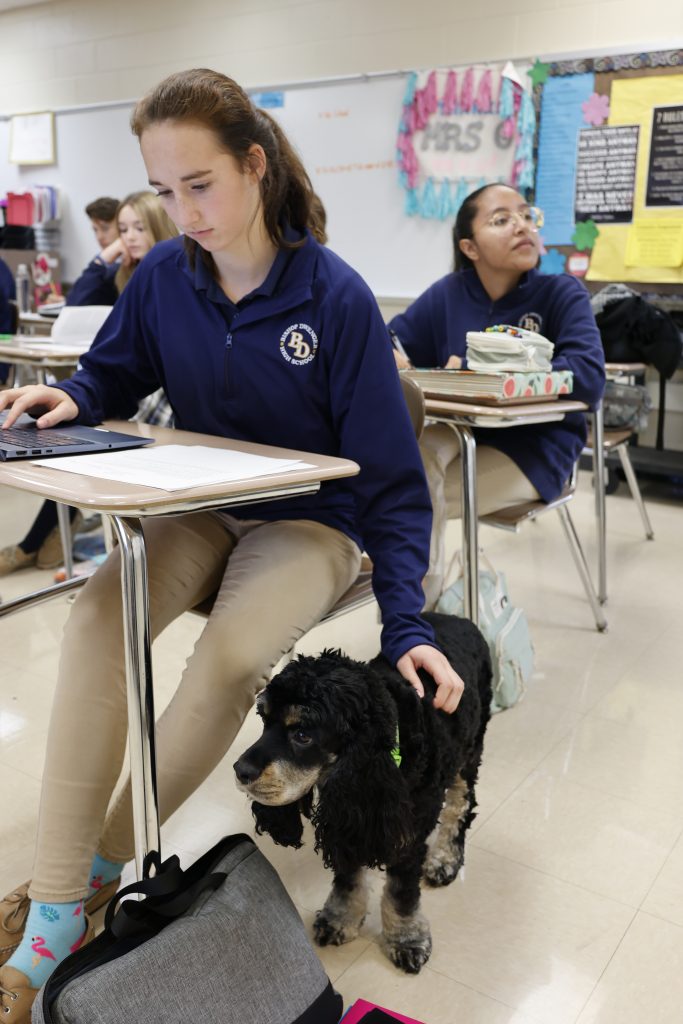 Now two years old, Ace has been coming into the classroom a couple times a week for more than a year. Sometimes he even ventures beyond the language arts wing to other areas of the building, visiting secretaries who keep treats on hand for him, other teachers who themselves might need a morale boost, and occasionally stopping at the St. Mother Teresa Program classroom to visit the special needs students, who adore him. He was even pictured in the staff section of the school yearbook last year.

Between classes, Ace steps out of the classroom to watch the students in the hallway, waiting for his usual favorites to stop by and see him during their busy days. Gonzagowski loves to see the students seek out Ace during passing periods, watching as he “brings them back” out of their plugged-in worlds to interact with another life-giving being.

When Gonzagowski asked her class if her canine companion was a distraction, the students answered with a resounding no. “He’s really fun to have in class,” said Lucas Alderdice. “Honestly, once you get used to having a dog in the classroom normally, he’s just a good part of the day, you know? He brightens it up.”

“I thought having a therapy dog in the classroom was stupid when he started coming in last year,” said student Julian Tippmann, who has now changed his mind on the importance of therapy dogs. “He knows better than you know how you’re feeling. Like at the beginning of the day, I’ll come in here and I won’t even realize I’m having a bad day and he’ll come and sit next to me.”

Gonzagowski expounded on the link between faith and four-legged friends like Ace. “I think it’s good when you can look at animals and what God made for us. These help people. … I think God put these puppies on earth to help us out, especially during these times.”

She does admit that “It would be easier not to have him here every day, but he just brings so much joy to the kids. And me.” 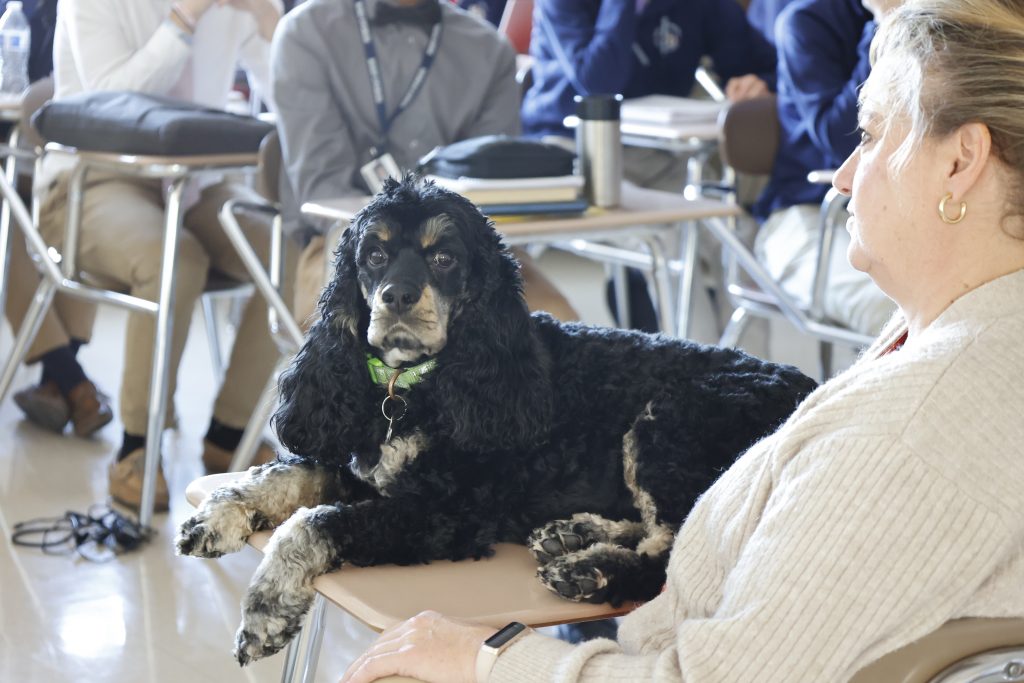 Ace’s presence in the classroom is not the only method the administration at Bishop Dwenger employs to address the students’ mental health needs. Last fall, Schiffli sent a letter to school families concerning the “cloud of malaise, anxiety, and pessimism” that still lingered in the school’s hallways. “So, I created a committee made up of faculty, support staff, and administrators to discuss how to combat this depression and negativity,” he said.

Simple changes like incorporating a seven-minute passing period instead of five – which gave students a little time for socialization – and spirit-wear Fridays, where students can shirk their uniform shirts for Bishop Dwenger-related T-shirts. “These decisions that may seem small and unimportant can be the most effective in raising morale,” he commented.

Since implementing these changes last year, Schiffli reports that there has been “more optimism in the air”, and other developments are in the works, such as painting religious murals and quotes throughout the school, “to give our students a spiritual lift.”

Schiffli added that “I want to give a huge shout-out and a ‘tip of the halo’ to BD’s Team Tuffy (made up of BD staff and parents). Team Tuffy has planned many fun and theme-based days for the faculty last year and this year. There’s so much good food, fellowship, and laughter these days when you walk into the teacher’s lounge. Team Tuffy has something planned at least every month!”

The staff at Bishop Dwenger, Schiffli stated, give much of themselves to “to care, counsel, coach, and help our students.” Some of them, such as Gonzagowski, utilize unique methods like bringing Ace into her classroom.