This is what Brandon Gosselin heard, lying in shock and a pool of his own blood, the left side of his face mangled where it had skidded across the gravel after he was hurled over the handlebars of his Four Wheeler traveling at 50 mph. He hit a deer. The Four Wheeler stopped. Gosselin didn’t.

Gosselin woke up in a hospital bed three days later. He had suffered a traumatic brain injury that left him with the mental capacity of a third-grader and his doctors told him he would never be the same.

That was in 2013. This year, Gosselin submitted a creative video narrating his experience of the accident — and what happened after — to The Christophers college video award competition, winning first place. But this accomplishment represents only a sliver of Gosselin’s ventures and aspirations, including, among other things, running for president of the United States in the 2032 election.

Before his accident, Gosselin had just graduated from high school. He was valedictorian of his class, one of the top 10 basketball players in Oklahoma, and had been accepted to his dream school, University of Oklahoma.

So naturally, after the accident, Gosselin did not listen to his doctors.

“I woke up to my life turned upside down. I went from Mr. High School to Mr. Hopeless,” Gosselin said. “I accepted the fact of where I was because the doctors went to school for a billion years, so they know that they are talking about. But one day, I was lying in bed, and I had this realization. … God put me on earth for a reason and I am bound and determined to see what that is.” 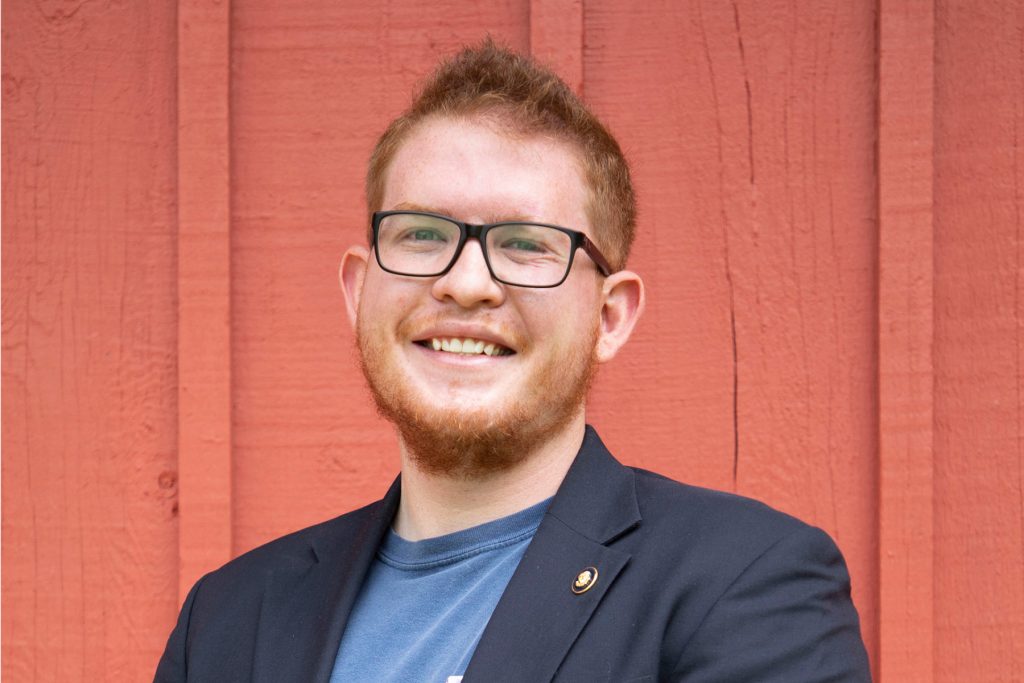 Brandon Gosselin, who today is a motivational speaker and entrepreneur, suffered a traumatic brain injury in 2013 that left him with the mental capacity of a third-grader. His doctors told him he would never be the same. This year, Gosselin submitted a creative video narrating his experience of the accident, and what happened after, to The Christophers college video award competition, winning first place. — CNS photo/courtesy Brandon Gosselin: The Aspirational Storyteller

He went to college the next year, his mental capacity improving far beyond what doctors had led him to expect, and he attributed it all to “the man upstairs.” His mantra as he struggled to heal and simultaneously succeed in his classes became “Study. Physical therapy. Pray. Repeat.”

He graduated from college with a 4.0 GPA and now owns his own company, the Aspiration Corp., through which he travels across the nation as an inspirational speaker for high school and college students. He is also a founding member of a tech startup that offers an advertising platform.

Not one to neglect the charitable, Gosselin has several fingers in the nonprofit pie. One of his pet projects has been to help build a self-sustaining economy in Haiti.

He works on the board for the “Coalition of Hope,” which is in the process of re-purposing an old naval vessel as a disaster relief ship, outfitted with medical personnel, food, water and emergency supplies. The ship can easily access coastal areas, including Haiti, when hurricanes or other natural disasters strike.

Gosselin, only 24 years old, humbly deflected the responsibility for his own accomplishments.

“We only have one life to live, why live it in areas where we are complacent or comfortable,” Gosselin asked. “It is important to push forward and get out of our comfort zone towards glorifying the kingdom of God.”

For Gosselin, a life-threatening accident with a Four Wheeler “hasn’t been all bells and whistles and cherries and Tootsie rolls,” but it also was the defining experience of his life, the experience that redirected his path from that of a Wall Street trader, to the evangelist/entrepreneur/writer/motivational speaker he is today. And the president he hopes to be in the future.

Gosselin said the work he has been doing for the past six years has all been a part of, what he calls, “the education plan,” in preparation for his 2032 presidential campaign.

Over the past few years, Gosselin made a point to live experience different parts of American life. He grew up in the Midwest, now lives on the East Coast and plans to move to the West Coast. He grew up poor. His family of six lived in a one-bedroom house in tiny Burlington, Oklahoma, where the population was just over 150.

As an adult, he has experienced life in the middle class, and also surviving paycheck to paycheck. He has lived as a college student, struggling to pay tuition, and also as an entrepreneur learning the challenges of operating a business. He plans to spend time working as a fireman or police officer before his 2032 campaign.

“I’m putting myself in the experience and lives of people I don’t fully understand,” Gosselin said. “If I can have a glimpse of their lives, I can put myself into a better place to understand and serve the American people.”

Gosselin said that, for him, the whole idea of running for president is not self-promotional.

Editor’s Note: More information about Gosselin can be found at his website, https://brandongosselin.com.